If This Man Rapes A Woman How Will You Find Him... 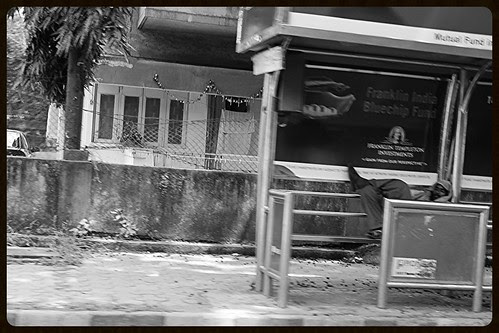 If This Man Rapes A Woman How Will You Find Him..., a photo by firoze shakir photographerno1 on Flickr.

Most of the places under the sky walk , flyovers bus stops have people of questionably character moving around , the guys who raped the women at Shakti Mill compound were there after their alleged number of rapes and nobody questioned then or booked them as vagrants because the system catches rich people to fleece them from the poor you get nothing no chamdi no damdi.

Most important fact of all the crime committed by hardcore criminals and newbies minor is that they are not at all scared of the khaki policeman.. I mean imagine a guy beating up a cop , because sorry to say the cops have allowed themselves to be over ridden by the public , letting go of lawbreakers for allegedly taking money at traffic signals ,,we have seen it all but who is complaining,,

Than when a cop comes in wielding the Danda to get rid of criminals like Mr Samad Shaikh of Bandra Police station he is shunted out... so all in all it is another brick in the wall.. and the cops I am with the cops overworked badly paid , over stressed bullied , traumatized at home at work , political pressures what does one do and both sides suffer ,,,

There are good bad ugly in all society and going for an overkill because of one man is not right ,,and what really hurts me that whether you ask for stringent punishment for rapists it will not end till the mindset of society is not changed ,,allowing people like drug addicts vagrants and repeated offenders on the street without checking on them how will the women ever be safe ,, bus cleaners violating children and school principals trying to hush up their acts to save the name of the school is bad all the way..

And as a street photographer I see so much that escapes the normal eye ,, if you come down the Bandra flyover near the sea link couples literally making it out , the slum kids watching them .. and the cops nowhere around what do you expect.. I leave the rest to juggle in your minds ,, as a blogger concerned senior citizen the rape of my city hurts the most .. by those that have turned a blind eye..each one holding to his chair ,, lest it go..

And even the coming elections wont change it till we change it ,,