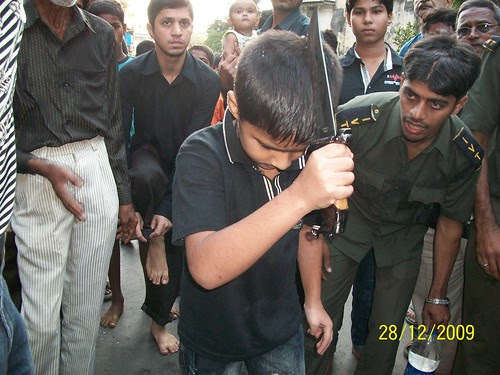 
Though he has not told me who shot the pictures I thank the photographer too, he has documented the angst of the Shia community of Mumbai.

If I had not gone to Hyderabad I would have shot this segment that begins on eve of 7 Moharam at Kaisar Bagh and finally ends with Sham e Ghariba at Rehmatabad Shia cemetery recited by Maulana Athar Saab of Lucknow.

And thanks to You Broadcast , that was earlier You Telecom that was prior to that Iqara , my net crashed , due to a fiber cut, at 7.30 pm last night and was resumed this morning.

This is a regular feature of You Broadband, and they dont compensate you for the time lost, or add extra time to your plan for such an exigency.

And sending messages to them or talking about the same to You Customer care is water on a ducks ass..

So I gave my computer rest , and rested too..I woke up several times though as my soul is hooked to Flickr and Facebook but it was dead completely...

And now to the guy cutting head a ritual known as Kamazani, watch his grip, I would have slept on the floor to capture the glint of fearlessness in his eyes..and Moharam is incomplete without blood letting and gore.It comes with the territory..and I love shooting blood and gore..so does my American friend Dr Glenn Losack MD.

However I like shooting the streets , it is bursting forth with pictorial gemstones..I like to be abused , threatened for shooting street pictures , I am doing nothing illegal, and people with illegal minds hate the camera more than their nagging wives ..

The camera seeks truth out however hard you try to bury it under layers and layers of deceit.