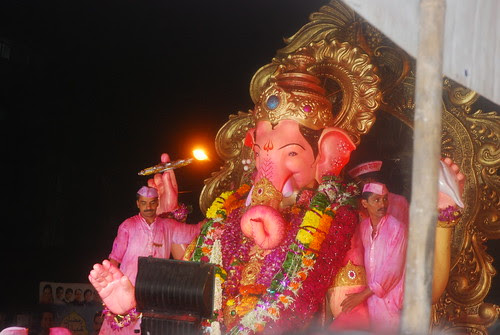 Almost every shopkeeper, beggar shop vendor knows me at Lalbagh, thanks to Lalbagh Cha Raja who beckons me to his Court yea after year , this year I shot him extensively, all angles save from the stage..and I made just one trip after that I shot the Visarjan. I did not go for the auction as I had done last year..

Lalbagh Cha Raja may have many devotees , well wishers , but he has been over generous to the barefeet Muslim blogger of Mumbai..I have no words to describe these feelings..

The Mandal, formerly known as 'Sarvajanik Ganeshotsav Mandal, Lalbaug' was founded in the year 1928,[1] because of a vow (Navas) for construction of the present Lalbaug Market at its existing place. The market place at Peru Chawl was shut down in 1932. Hence, the fishermen and vendors who used to sit in the open place vowed to Lord Ganesh for permanent place for their market. With the consistent efforts & support of the then local Councillor-Late Shri. Kuwarji Jethabhai Shah, Dr. V. B. Korgaonkar, Shri.Nakhawa Kokam Mama, Bhausaheb Shinde, Dr.U.A. Rao and the local residents, the landlord Rajabai Tayyabali agreed to give a plot for construction of a market. As fulfillment of their wish, the fisherman and the traders established the Ganesh Idol on 12.09.1934. The idol was dressed in the customary fashion of fisherman. Since that day onwards, this Lord Ganesh has become popular as it fulfills the wishes of devotees. The Mandal was formed in the era when the freedom struggle was at its peak.

Due to the communal riots in 1946, orders were issued to change the route of this Ganesh Immersion Procession. But, the then office-bearers of the Mandal refused to change the route and, after 21 days, the procession was taken by the same route under the supervision of then Volunteers Pandurang alias Babu Sayle, M.S.Pawar and Dattaram Joshi. After independence, the agenda of the Mandal was modified and accordingly the Mandal decided to contribute in uplift of the Country. The Mandal donated its balance amount to the Kasturba Fund, the Mahatma Gandhi Memorial Fund in 1947 and to Bihar Flood Relief Fund in 1959. The social issues were also highlighted in the plots during Ganesh Festival.

After 1958, the number of devotees of Lalbaugcha Raja increased substantially. Hence, in 1960, the entertainment programmes and speeches were discontinued. In the same year, 'Navaratri Utsav' was started and the programmes were organized during Navaratri Festival. These transitions were carefully and neatly carried out by Chandrakant Khadye, Chunilal Rathod, Pranjivan Mehta and Shankar More. During this period, Late Shri. Shamraom V. Bodhe handed over the Hanuman Temple to the Mandal.

During 1948 to 1968, the Mandal started some new traditions like 'Shri Satyanarayan Mahapooja', 'Pan-supari Samarambha (Get Together Function)'. The Get Together Function is the ceremony of felicitation by offering roll of betel leaf with betel nuts, known as Pan-Supari in Marathi. During this get together, eminent personalities of different fields, office bearers of various mandals and well-wishers are invited. This creates a friendly atmosphere for co-ordination & exchange of views for better performance of the festival and helps in improving relation among various mandals. In this manner, the mandal established a warm relationship with some mandals of Kumbharwada, Durgadevi Duncan Road, Kamathipura, Khetwadi, Navi Amrutwadi, etc. The participation of local mandals at night, was started to control heavy number of devotees.

During 1934 to 1968, Kunwarji J. Shah, Dr.V.B. Korgaonkar, H.B. Korgaonkar, Dr. U.A. Rao, Dr. Manju Madar, Ramchandra Tawate, B.D. Bandekar, Raghunath Khamkar, Pranjeevan Mehta, Rambali Halwai, Ram Jadhav were mainly responsible for development of the Mandal. The amount accumulated from the Mandal activities was mainly used for development of the nation. Mandal did its bit by contributing to the National Fund during floods at Bihar in 1959 and during the wars in 1962 &1965.

In 1969, new generation came up with wide view under the leadership of Late Shri Vasantrao Bhosale. Space requirement arose due to great extent of workload of the Mandal. In 1970, renovation of the Hanuman Temple was proposed. Accordingly, the renovation work was commenced in 1971 and completed in 1973, along with a new office for the Mandal. In 1975, Idol of Amba Mata (Goddess Amba) was established in the temple and the religious duties of Navratri festival were carried out in the temple, thereafter.

Since 1976, a part of the balance amount of the Mandal was deposited as 'Shikshan Imarat Nidhi'.

During the decade 1984 to 1993, the Mandal carried out many other constructive social works. In 1990, the Mandal contributed Rs.15,000/- towards 'Konkan Flood Relief Fund', established by the Express Group for the flood affected people of Jambhulpada, based in Konkan, Maharashtra.

It is the first mandal who contributed Rs.1 Lakh to the 'Army Central Welfare Fund', in 1999 for the families of the soldiers who scarified their lives to uphold the dignity of the Nation at Kargil and the same was handed over to then Governor of Maharashtra State, Dr. P.C. Alexander.

During this computer age, Mandal launched its website www.lalbaugcharaja.com in 2000. Hon’ble member of the Mandal Shri Bharat Bhujbal conceived with the idea and took efforts to fulfill it. The information related to the festival, the social activities of the Mandal and photo gallery of Lalbaugcha Raja is available on the website. This is very useful for the devotees located in various parts of world.

Visarjan Tarafa: Traditionally the Ganesh idols are immersed in water during its Visarjan. Hence in order to immerse the idol of Lalbaugcha Raja, Mandal always takes proper precautions so that the visarjan takes place in a manner the Raja deserves. Accordingly, after consulting some experts & experienced persons, Mandal has purchased a Tarafa (Iron Raft) which makes it possible to dissolve the idol of Lalbaugcha Raja in deep sea water, conveniently. The Tarafa is prepared by M/s. A.V. Engineering.

The small plant ploughed by old, wise members of the Mandal has been converted into a large tree. Now it is looked after by the new generation members by their dedicated work. This will definitely continue forever, with blessings of Lalbaugcha Raja.
[edit] Present Day.

Population: Prominently Marathi speaking with a smattering of Gujarati and North Indian.

The Magic of Lalbagh Cha Raja 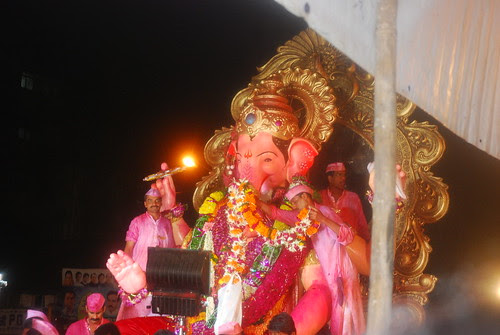 Lalbagh Cha Raja is a singular moment of Peace beyond religiosity, and it is a moment that as I walk with him from Lalbagh to Chinchpokli to Byculla to Clare Road to Nagpada and to Do Tanki Kumbhrawadi.. I see without blinkers as a Shia Pandit..yes if saffronization of my soul brings me closer to humanity so be it..I shoot Lalbagh Cha Raja or he shoots me with a dart that remains embedded as love for this great city Mumbai..

Over 100000 blogs and my wife complains why do yuou shoot the same thing over and over again - I have no answers, I dont sell pictures , I dont make money of my blogs I am a bankrupt..but I touch people far into the hinterland of cyberspace, people touch my feet , taking me to be a holy man , that I certainly am not, but I bow my head in humility..I found the camera to be the greatest instrument of Peace , so instead of throwing my grand daughter in a swimming pool when she was 3 month old I began teaching her photography..

And my grand daughter Marziya Shakir can perhaps shoot Lord Ganesha better than me ..through her innocence and her mind.


Many years back on the beach at Girgaum Chowpatty my camera was seized my digital card formatted , because I accidentally shot the Visarjan of Lalbagh Cha Raja , the Mumbai Police can be very heartless even though I have a Press Card.. I was in tears , when I returned home spoke to Subash Solanki, who asked me to send the card to him and I got back all the Lalbagh Cha Raja last journey pictures..some moments even the Mumbai Police can never delete completely..

“Oh! Lord (Ganesha), of huge body and curved elephant trunk, whose brilliance is equal to billions of suns, always remove all obstacles from my endeavors.”

“Salutations to Lord Ganesha who has an elephant head, who is attended by the band of his followers, who eats his favorite wood-apple and rose-apple fruits, who is the son of Goddess Uma, who is the cause of destruction of all sorrow. And I salute to his feet which are like lotus.”

No obstacles will come in the way of one who reads or listens to these 12 names of Lord Ganesha at the beginning of education, at the time of marriage, while entering or exiting anything, during a battle or calamity.

“In order to remove all obstacles, one should meditate on (the Lord Ganesha) as wearing a white garment, as having the complexion like the moon, and having four arms and a pleasant countenance.”

“Oh God who has the mouse as his vehicle, and the sweet modhaka (rice ball) in your hand, whose ears are wide like fans, wearing the sacred thread. Oh son of Lord Shiva who is of short stature and who removes all obstacles, Lord Vinayaka, I bow at your feet.” 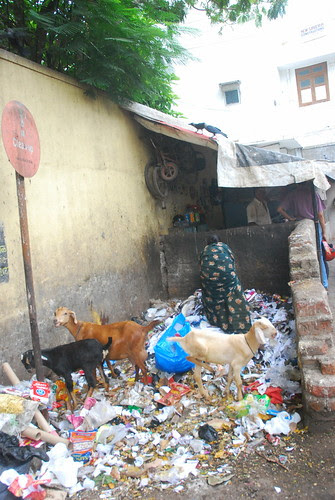