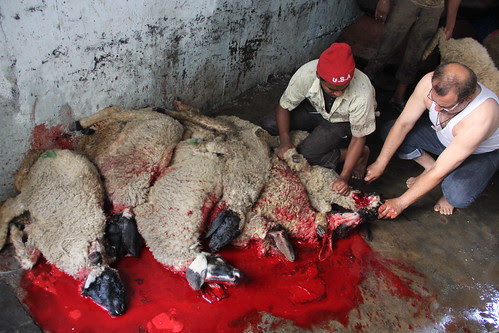 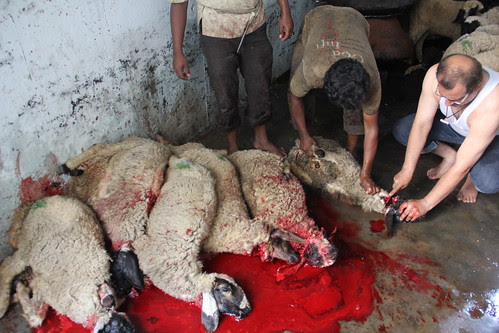 Life On a Slow Track..Memories That Wont Come Back 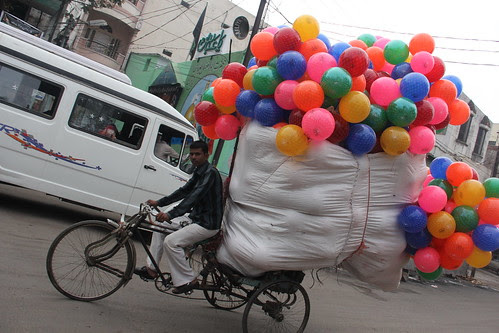 Life On a Slow Track..Memories That Wont Come Back, a photo by firoze shakir photographerno1 on Flickr.
By Firoze Shakir Photographer No1 - December 02, 2012 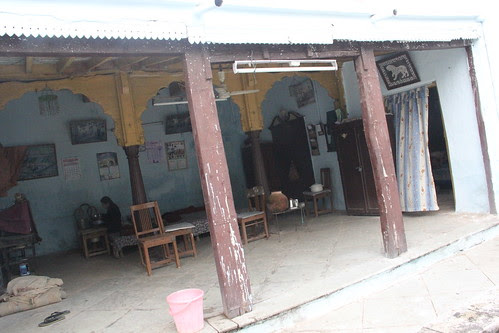 My maternal grand father Daroga Nabban saab desendant of Mir Anis lived in a house similar to this but without a fountain at Imliwali Gali Pata Nala Lucknow.

It had a huge tamarind tree guava and mehndi trees .. of course my grandfathers last heritage ancestral property was sold of by my uncle and seeing this house in Hyderabad I was transported to my childhood and the memories of my grandmother Nazmi Begum also known as Bhabbo ammi.

The Dying Art of Darning 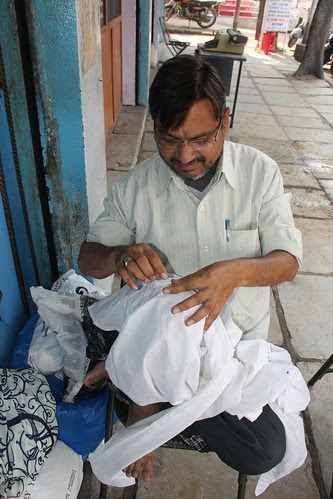 The Dying Art of Darning, a photo by firoze shakir photographerno1 on Flickr.

Darning is a sewing technique for repairing holes or worn areas in fabric or knitting using needle and thread alone. It is often done by hand, but it is also possible to darn with a sewing machine. Hand darning employs the darning stitch, a simple running stitch in which the thread is "woven" in rows along the grain of the fabric, with the stitcher reversing direction at the end of each row, and then filling in the framework thus created, as if weaving. Darning is a traditional method for repairing fabric damage or holes that do not run along a seam, and where patching is impractical or would create discomfort for the wearer, such as on the heel of a sock.
Darning also refers to any of several needlework techniques that are worked using darning stitches:
Pattern darning is a type of embroidery that uses parallel rows of straight stitches of different lengths to create a geometric design.
Net darning, also called filet lace, is a 19th century technique using stitching on a mesh foundation fabric to imitate lace.
Needle weaving is a drawn thread work embroidery technique that involves darning patterns into barelaid warp or weft threads.

In its simplest form, darning consists of anchoring the thread in the fabric on the edge of the hole and carrying it across the gap. It is then anchored on the other side, usually with a running stitch or two. If enough threads are criss-crossed over the hole, the hole will eventually be covered with a mass of thread.
Fine darning, sometimes known as Belgian darning, attempts to make the repair as invisible and neat as possible. Often the hole is cut into a square or darn blends into the fabric.
There are many varieties of fine darning. Simple over-and-under weaving of threads can be replaced by various fancy weaves, such as twills, chevrons, etc., achieved by skipping threads in regular patterns.
Invisible darning is the epitome of this attempt at restoring the fabric to its original integrity. Threads from the original weaving are unravelled from a hem or seam and used to effect the repair. Invisible darning is appropriate for extremely expensive fabrics and items of apparel.
In machine darning, lines of machine running stitch are run back and forth across the hole, then the fabric is rotated and more lines run at right angles. This is a fast way to darn, but it cannot match the effects of fine darning.

There are special tools for darning socks or stockings:
A darning egg is an egg-shaped ovoid of stone, porcelain, wood, or similar hard material, which is inserted into the toe or heel of the sock to hold it in the proper shape and provide a firm foundation for repairs. When the repairs are finished, the darning egg is removed. A shell of the tiger cowry Cypraea tigris, a popular ornament in Europe and elsewhere, was also sometimes used as a ready-made darning egg.
A darning mushroom is a mushroom-shaped tool usually made of wood. The sock is stretched over the curved top of the mushroom, and gathered tightly around the stalk to hold it in place for darning.
A darning gourd is a hollow dried gourd with a pronounced neck. The sock can be stretched over the full end of the gourd and held in place around the neck for darning.
A used light bulb can be used to hold a sock in place for darning.
[edit]Pattern darning

Pattern darning is a simple and ancient embroidery technique in which contrasting thread is woven in-and-out of the ground fabric using rows of running stitches which reverse direction at the end of each row. The length of the stitches may be varied to produce geometric designs. Traditional embroidery using pattern darning is found in Africa, Japan, Northern and Eastern Europe, the Middle East, Mexico and Peru [1].
Pattern darning is also used as a filling stitch in blackwork embroidery.

Imam Hussain Saved Islam.. And Now Islam is Fighting To Save Itself From Those Who Run It To Oppress the Ummah 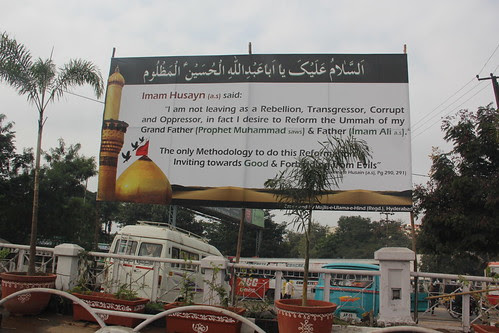 Imam Hussain Saved Islam.. And Now Islam is Fighting To Save Itself From Those Who Run It To Oppress the Ummah, a photo by firoze shakir photographerno1 on Flickr.
By Firoze Shakir Photographer No1 - December 02, 2012 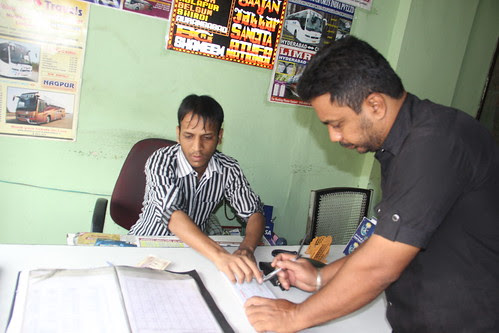 This Getting a Bus Ticket at Afzalgunj For Mumbai was The Worst Expereience of My Life, a photo by firoze shakir photographerno1 on Flickr.

This guy The Nawab sitting on the chair gave me a ticket and the next day was Gurupurab yet he did not bother to call me , I reached here at 5 pm, with Ejaz photographer , and there was a Sikh procession I shot instead of waiting here as they had no clue about the bus..

At 6 pm after waiting an hour they said go to Nampally so Ejaz my heavy suitcase rushed on the bike at Nampally I waited half an hour they the sub agents rude guys dumped me in a rick to the main highway for the bus and there I sat on the road , at the mercy of another set of rude arrogant syub agents and the bus turned up past 8 ..

So this was the most fucked up experiene of my life simply because there were no train tickets ..

I had a deep head wound to take care of .. but I managed to come home and after 1000 uploads blog my story.

And the travel guy General Tourist Afzalgunj Hyderabad ,, this bugger Rasjhid sold me the ticket and was not available at his shop or on phone number that he gave me..

The guy in black is Akthar who helped me I stayed at his house ... 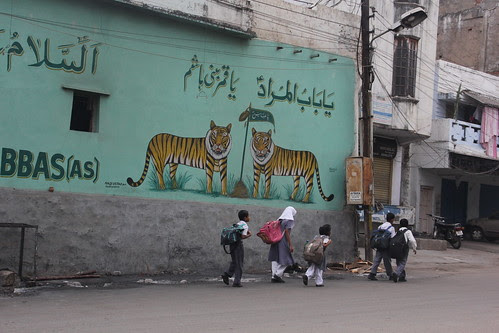 As a photographer I can only shoot what I was destined to shoot, a photo by firoze shakir photographerno1 on Flickr. 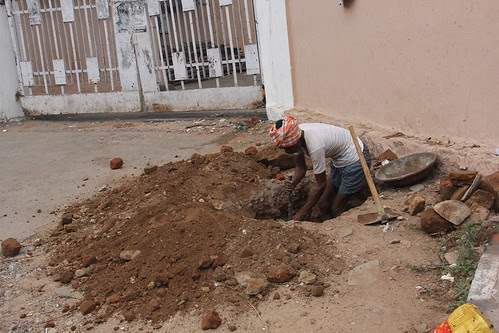 As I Have Pledged my Body To Medicine I Wont Have To Go Through This Procedure, a photo by firoze shakir photographerno1 on Flickr.
By Firoze Shakir Photographer No1 - December 02, 2012