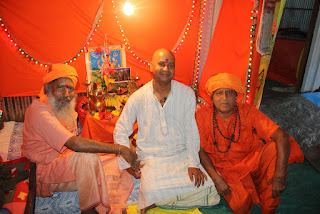 In the initial days my guru only knew me as a fashion person with Bollywood , he had seen me at Film city much before we came to know each other Nasikh Kumbh Trimbakeshwar 2003 ,,at the Maha Kumbh to save my ass from right wing bigots my Guru named me as Ashok Bharti but I was uncomfortable with this sobriquet ,but out of respect I did no say a word I wanted pictures and I wanted memories .. but here at the Nasikh Kumbh I sat with my Guru and explained to him that he should take all the credit for having a Muslim disciple ,,so I did not hesitate when Swami Avdesh Anandji Maha Mandleshwar Juna Akhara asked me who I was I told him I was a Muslim documenting Hinduism as Hope and Hindutva a message of Universal Peace and thus I shot the Shahi Snan at Trimbakeshwar Ram Kund ,,29 August 2015.
The Naga sadhu who did the Arti at our Gurus makeshift temple Shankar Giri had expired so another Naga Sadhu took charge ,,,
But there was a Naga Sadhu from Rajasthan,, when he was coming to the Kumbh someone stole one of his bags and it was the bag that contained his heart medicine he was in great pain , but Vinod bhai the BJP Neta from Goregaon ,, made sure he got the medicine from Nashik the very next morning .And this Naga Sadhu was hot tempered and took offence at every thing ,, I stayed away from him but later he took a liking to me and narrated some amazing stories of Lord Ram.
On Shahi Snan day both my guru and this sadhu were stark naked they applied ash to each others bodies , but while heading to the kund my Guru wore a short dhoti..
And we set out in the BJP Netas Scorpio ,, wee hours of the morning to the hearty robust chant of Har Har Mahadev,,, my guru does not smoke the chillum at all.
I lost him when we reached Trimbakeshwar kund ,,,all of them I was told took the dip including Netaji and the other disciples.. excepting me ,,I was caught in the crowds and entered with the cortege of Swami Avdesh Anandji Juna Akhara.
Mahesh Bhardwaj my gurus main disciple and Netaji tried calling me but it was impossible to connect in the chaos.
In the picture below my Guru and his main disciple Mahesh Bhardwaj and me .
By Firoze Shakir Photographer No1 - September 03, 2015 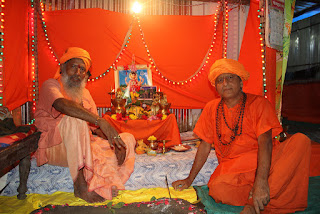 I used to wear saffron many years back and it had nothing to do with religion being a product of Bollywood I dressed to raise eyeballs and I wore red turquoise and rust maroon,,
But in 2011 I took a vow as a Malang I stopped wearing colors I stuck to black.. and as I wore black for 2 month eight days in Moharam it continued ..I wore suits jodhpuris corporate clothes but never a tie ,, I wore it for formal occasions and I wore Hush Puppies but sometimes I would attend a wedding in a suit and barefeet .
When I went to shoot the Maha Kumbh I had a total black wardrobe my black Malang robes dhotis shalwars etc.. and it was here on Basant Panchami Shahi Snan day my Naga Guru Shree Vijay Giri Maharaj Triveni said black was inauspicious for the dip and would not do ..so he dressed me up as a Sadhu in white with vermilion and ash etc and I shot the Shahi Snan up close took the the dip with my Naga Guru.
This time I made two orange dhotis I could not get a matching orange tshirt I took all white bodyfits and bought a saffron shirt total sickly cheap polyester at Trimbakeshwar for the Shahi Snan.. The Naga Sadhus dont let you enter the Kund with them if you are in white unless your Guru stands up for you ,,I had to shoot the Shahi Snan I did not have an orange safa turban so I wrapped a wollen shawl from my Guru , and I did not carry my camera bag just my waist pouch and here too I was told they dont allow leather bags or pouches at the Kund ,, but I had to keep my cards an extra battery and a 50 mm lens I never used.
This picture was shot on the eve of the night of the Shahi Snan .. this is my 6 th card of images shot on 28 August after I came back from Ramkund Tapovan.. this includes the ling kriya of my Guru before going to the Shahi Snan and  this is performed as an important ritual I shot the video instead of the stills when he actually performed it with a Naga Sadhu standing on the stick entwined to his penis .
This is a 8 GB card and the entire Shahi Snan that ends the Trimbakeshwar bit is 32 GB,, I did not take the dip as my Guru was not there I got lost in the Melee and this time of the Holy Dip is strictly for the Nagas and their Bhakts ,,
This entire series was shot on my Canon 60D
I shot the Ramkund and Tapovan on 7 D a camera I hardly use , it is mostly used by my 7 year old granddaughter Marziya.
I am yest not sure if I go back for the next two Shahi Snan but if he makes it possible than it might be not less than a miracle ..
The Shahi Snan pictures of the naked Naga Sadhus and the Ling Kriya can only be seen by Flickr members I have restricted it from public view as per Flickr guidelines.
Om Namo Narayan
Har Har Mahadev
By Firoze Shakir Photographer No1 - September 03, 2015

God Gave Me Pictures On A Silver Platter ,,Mind Over Matter 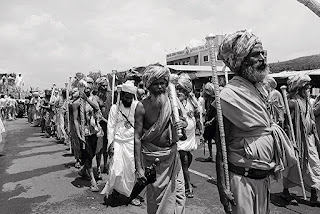 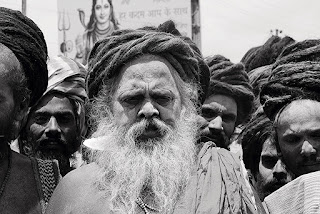 For Me The Kumbh Was A Face - Book 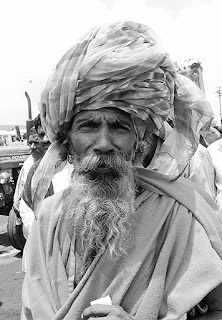 i shot faces
as they gave
me a curious
look.. for a
sadhu they
mistook this
beggar poet
a camera the
third eye of
shiva got
them hooked
cosmic connections
two souls thirsty
drinking from
the same precious
brook.. adding them ás
memories to my lifes book
By Firoze Shakir Photographer No1 - September 03, 2015