Bandra Bazar Road ..The Most Intriguing Road Of Rustic Bandra 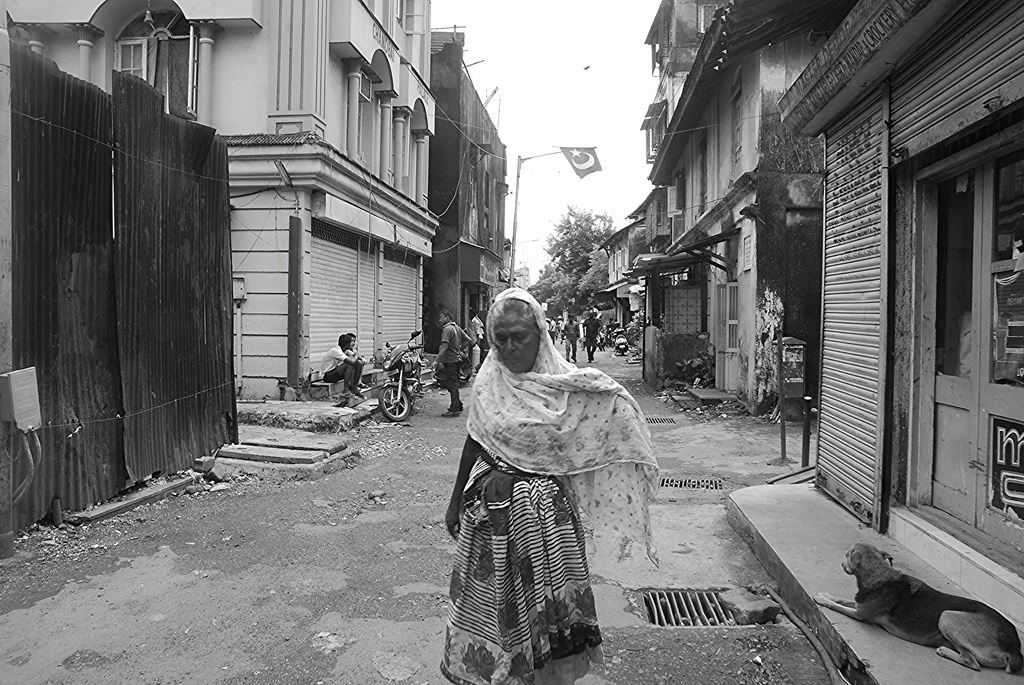 And this lady is a psychic , she talks to herself  but if she saw  me  she would start muttering and making angry eyes at me I could never understand her and I think she lived somewhere in the slums of Lal Mitti.. sometimes she was with a bearded man a silent reticent person who rode a scooter .

I have not seen her since a long time , sometimes I would see her in the fish market and the moment she saw me she would look heckled , like a cat who raises her fur seeing danger ,, she was defiant but also scared of me for no reason.

I never talked to her and never did try to approach her as to what was her ire against me ..and here in Bandra Bazar road  that touches almost all the bylanes far too many , Chinchpokli Road Demonte Road Jain Mandi Road Ice Factory Road and exit out towards Bandra Reclamation and the various slums that adjoin this area Indraji Nagar Rajiv Nagar and far too many and from the Shia Mosque the road branches out Waroda Road , Chapel Road and St Peter Road that exits at Bandra Hill Road again.

This area is demographically known as a Gaothan once the home of the earliest settlers East Indians ..fishing folks  and the quaint old bungalows the exquisite crosses Grottos Shrine testify to their heritage of harmonious peaceful living .. even now as you enter one of the lanes you can hear an Uncle playing the saxophone .

Old music of the 50s Jazz . in the Bazar Road annex that leads out to Bomanwadi or Ice Factory lane . The houses here are noiseless , old ladies watch you as you go by and two crosses on either side .. with Lord Jesus watching you two at both ends .

There is the East Indian pride De Monte Street once bungalows a few remain but the rest pulled down with connivance with crooks from the Municipality for repairs and in their place came the ugly monstrous structures called Channel buildings built on angles that rusted so fast that the walls have cracks , the builders her made a lot of money and have risen far now building towers after the stilt housing craze got over building extra floor on a existing building by putting pillars as stilts,

We came to Bandra Demonte Street in a repair permission building . in the 90s after the 93 riots .. and we have been living in Bandra since .. originally we are from Colaba Strand Cinema .

Bandra is now our adopted home , it has given us children grandchildren , happiness sadness success failure but it has also given us a place to call home so when I document this part of Bandra and try the to draw the attention of the local representatives it is only fr the betterment of this neglected rustic Bandra where East Indians Muslims Hindus Jains and other denominations like Bohras Shias Sunnis Dalits Sikhs Parsis Gujratis all live in peace .

No law order problem here as such and despite 15 years of rotten Congress rule that did appease and created ugly  slums and destroyed the once pristine beauty of Bandra forever .If you see the Nargis Dutt slum and the adjoining areas the filth dirtiness you would run a mile .and perhaps because they are Muslims seen only as vote bank their aspirations have been limited like clipped wings of a bird given partial freedom but always locked up in the cage at night.

We were traditional Congress voters but honestly if there is an option we would vote for the Devil instead of them.. they took us for one big ride ,,

And it hurts my dead parents would never imagine voting for any party but the Panja of Congress .

We have come a long way .. and we want a strong peace loving India ..and a vibrant peaceful Amchi Mumbai.

We witnessed the 93 riots at Khar Dandpada so we have really really come a long way forgotten the loss those dark memories but we have certainly not stopped cursing the political perpetrators of the Riots .. those whom we voted , those who were supposed to protect us let us down.. yet we stood behind the Congress like fools .

And this is a Bandra Blog.. of an apolitical person accidental poet and a prolific incorrigible street photographer . a grandfather too..

Email ThisBlogThis!Share to TwitterShare to FacebookShare to Pinterest
Labels: Bandra Bazar Road ..The Most Intriguing Road Of Rustic Bandra 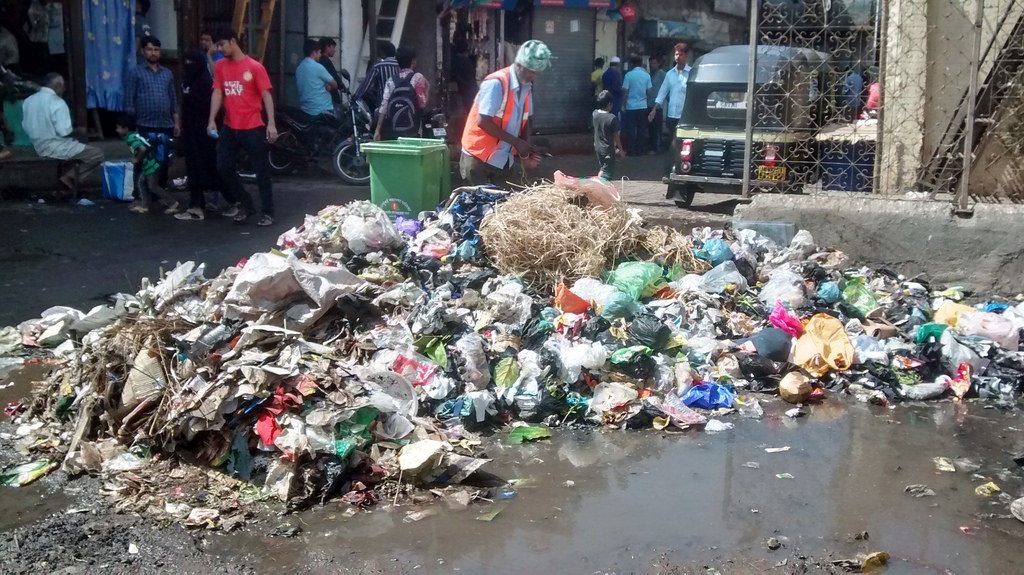 Bandra The Eternal Queen Of Garbage In The Suburbs
By Firoze Shakir Photographer No1 - February 19, 2015 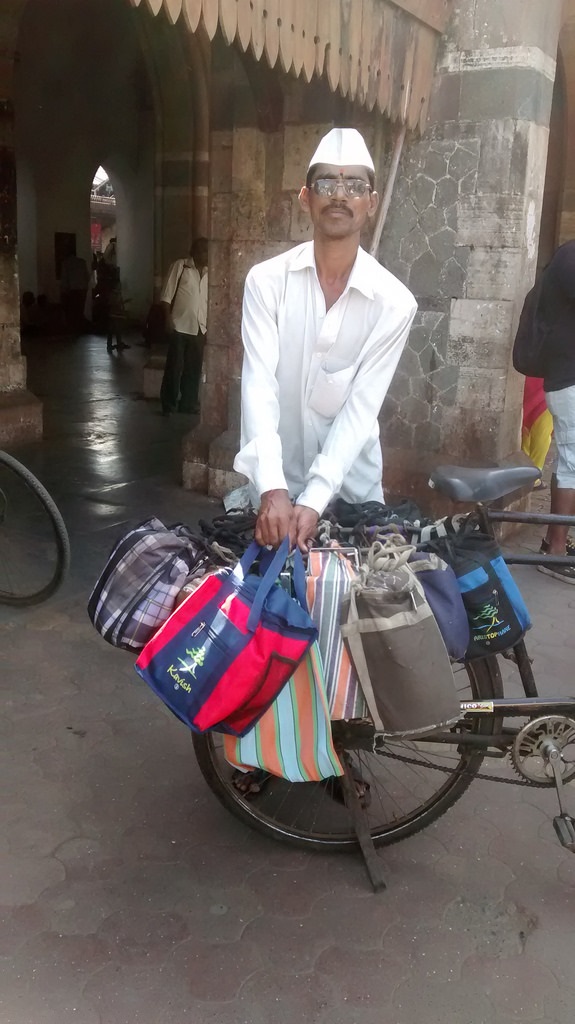 The Dabbawalas are used by filmmakers to promote their films ,by advertising agencies to promote their brands and by politicians including Mr Anna Hazare . they supported his JanlokpalBill agitation and cause .

But honestly what is the future of the Dabbawala ,,how long will he ply his cycle to deliver food on time .. carrying cartloads of tiffins on his head pushing them in the trains and he will do it till he dies or retire .. whatever he earns which I dont think is much , what about his children will be they be dabbawalas too or do they not deserve higher education become pilots doctors scientists and make their humble parents proud.

I think society and the government has taken the Dabbawala for a ride , like the Dhobis of Mahalaxmi ghat they cannot escape their fate famous for the wrong reasons.

Will the Dabbawalas not want to change their status in life , be taught educated even now as adults .. why not ,,,become computer savvy and make a mark on their own destiny.. but because they come from rural areas , because they are uneducated they slog as Dabbawalas and sadly their cause is politicized for the wrong reasons .

And talking about elitist night life is fine but Sir what about a better life for the community of our Maharashtrian brothers the Dabbawala.. I think they deserve to be appeased for their work and their precision and dedication. 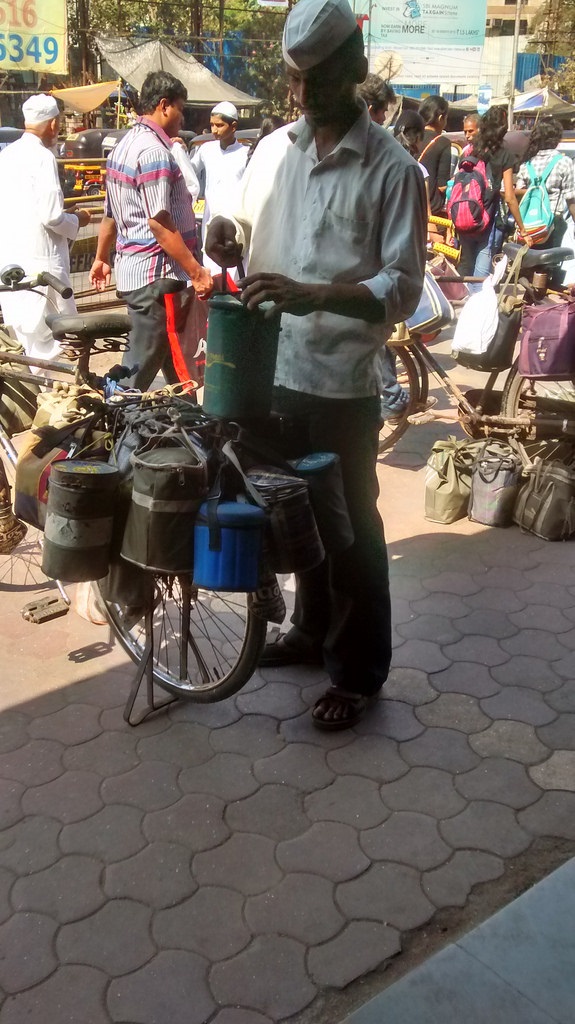 This morning I came for some work at the Bandra Slaughter House slums from Carter Road by 211 bus  I had got off at Bandra Station ..

And I decided to shoot the Dabbawalas I had a long chat with them and after several pictures on my mobile phone I shot a video too.

And the Dabbawalas are the true humble icon of Amchi Mumbai totally dedicated to their work.. here it takes them one and a half hour to collect the tiffins that one set of Dabbawalas bring on the trains and hands it over to the Dabbawalas of Bandra from where it will be distributed on cycles ,

The tiffins close to offices near the station are carried in a cluster on their shoulders .

I shot a lot than headed to the winding lanes of  Shastri Nagar and entered the Slaughter House slums for some work.

And here in the Slaughter House slums the AmAdmi Parts posters with Mr Phiroze Palkivala and Mr Arvind Kejriwal greeted me  at two places ,, I shot them both..

Email ThisBlogThis!Share to TwitterShare to FacebookShare to Pinterest
Labels: The Dabbawalas Bandra Station

The Chaiwali Lady Of Bandra Reclamation 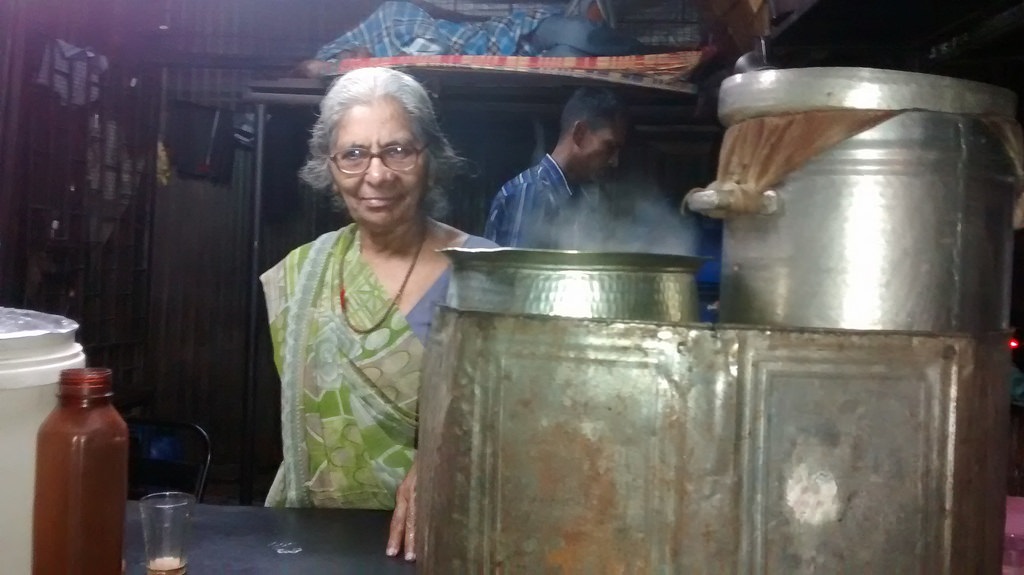 At the corner of Bandra Reclamation off Lal Mitti this lady has her tea stall and she is here by 5 am ..and this part near her tea stall is the taxi ricksha stand ..

Most of the ricksha guys who finish work late in the night sleep in the rickshas and after completing natures call at a Mound opp Rang Sharda .they all collect here for tea .. she charges Rs 6 full glass.

I have known her for many years and that is part of another interesting story ,, a poor destitute the Umbrella lady used to sit at the side of her stall under an Umbrella , the most iconic silent figure on Bandra Reclamation.. She could barely stand up so she did all her lifes chores at that place even bathing..and she never begged , people gave her food tea and money.

Both my grand daughters Marziya  and Nerjis would give their pocket money to her , and they would shoot her too.. Every time I passed her I would give her money,,, she never spoke to me at all.

One day a few months back I did not see her I assumed she must have fallen sick and they must have taken her to the Municipal Hospital.. but I came to know from this tea lady that she had died and the Municipal Hearse had taken her body away.. I felt sad as I documented the Umbrella Lady of Bandra Reclamation for a very long time ,,,My grand daughters missed her too but now they give their pocket money to the two old senior beggars of Bandra -Khwajah Bhai and Jaffar Bhai.

Well back to the Tea Lady I asked her if I could take a picture and write a few lines about her she politely said Yes and I took this hasty shot on my mobile phone her stall outside is full of rickshah guys ,, and a man assists her but mostly she serves the tea.

And I bought up the topic of the Umbrella Lady and she gave me news that will shock you too.. the Umbrella lady had a sack full of money about Rs 400000 that was taken away by the guys who took her body and belongings ,,and this is the story of a Mumbai destitute ,,or even a beggar who dies on the roads .. Where does the money go?

And I left her thanking her for allowing me to take her picture , though she said if she was given the money she would have distributed it back to the poor , but she was not there when the body was taken away ,,, the only confidante of the Umbrella Lady was this Tea Lady ,, the only Lady tea seller of Bandra Reclamation.

And the set on the Umbrella Lady Of Bandra Reclamation is

This is old time charm of Bandra 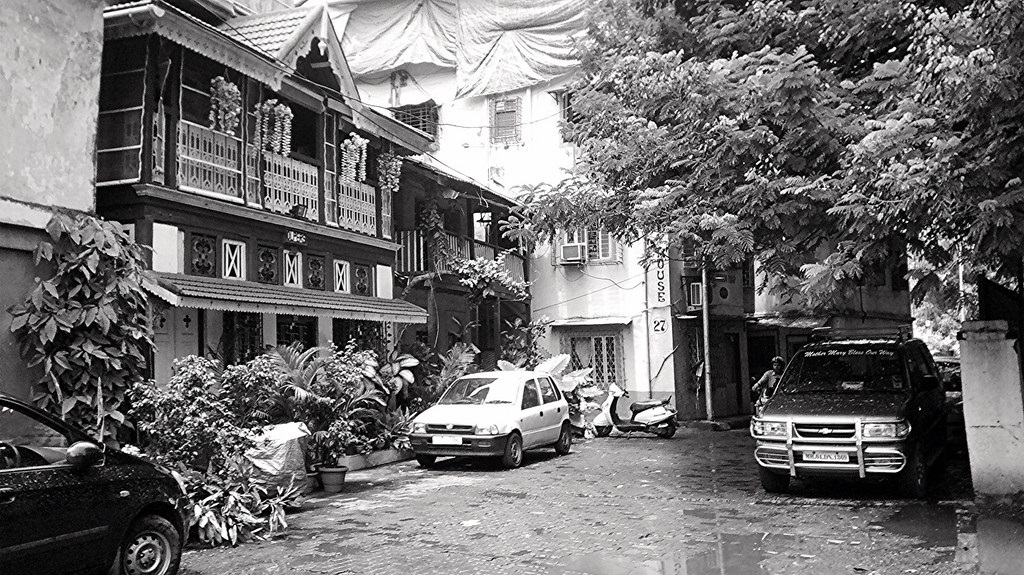 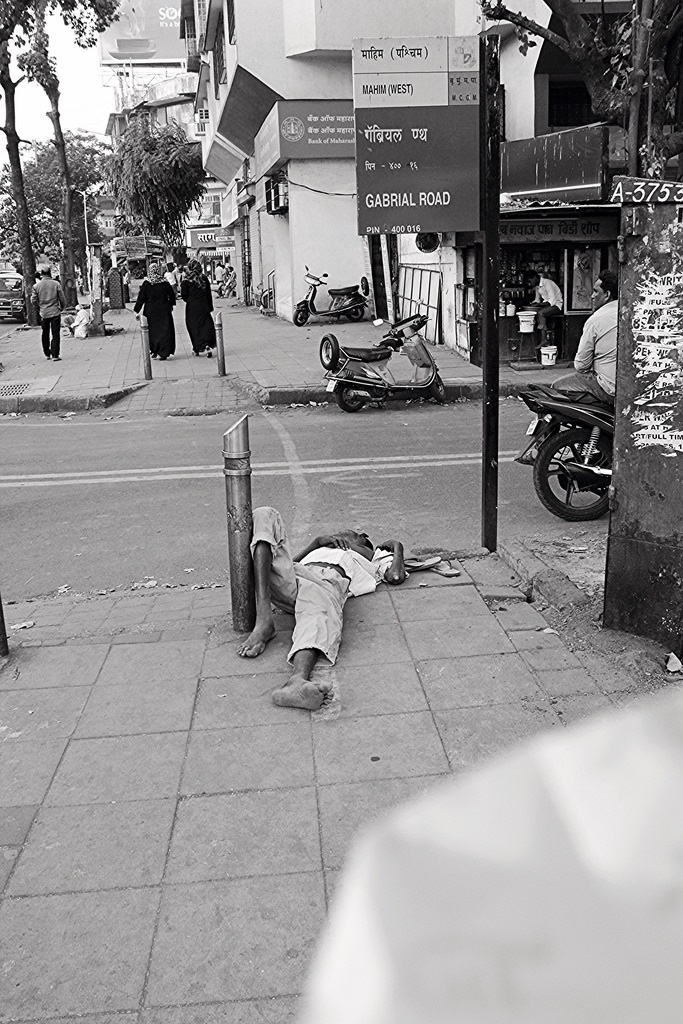 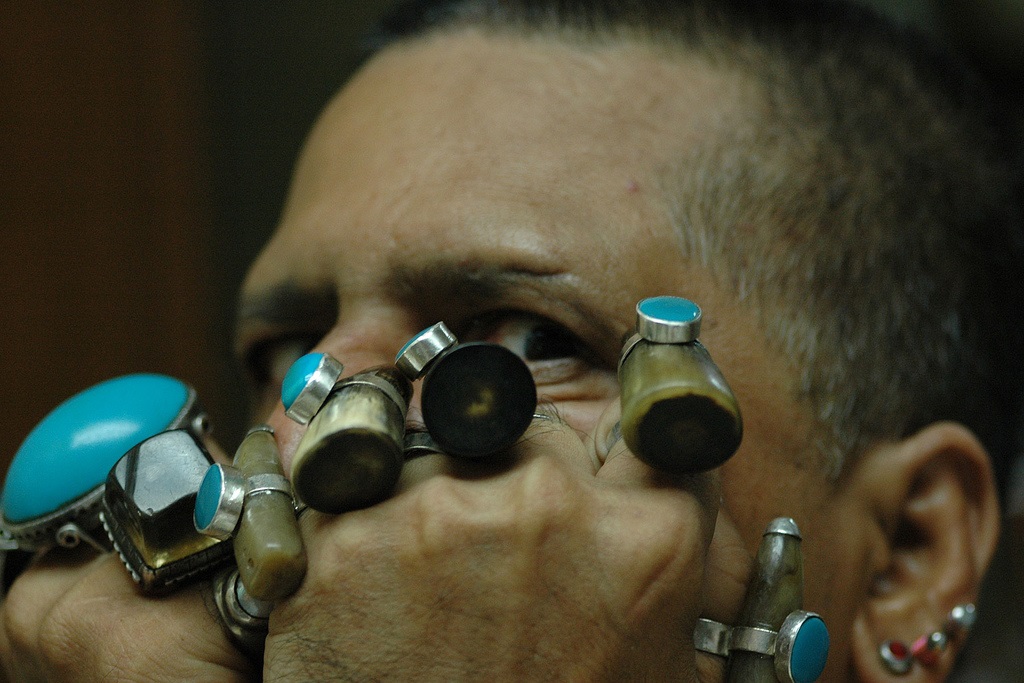