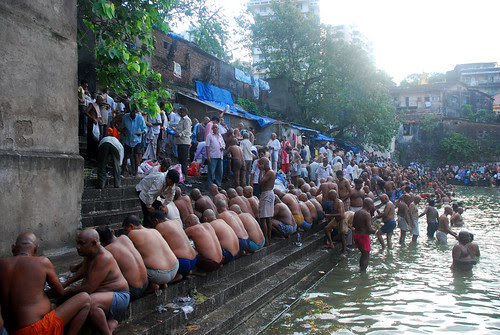 I start a new series I shot this morning at 6am, at Banganga Walkeshwar, Pitru Visarjan 2009 .

I shot this a few years back and it was because of Ranjit Shashank of PSI Mumbai who won accolades and awards for one of his pictures shot at this event at a photography competition.

So this is my tribute to him.

The migrants from Uttar Pradesh collect at this place , have their heads tonsured , and than appease the Almighty to bless the souls of their ancestors , who come down to earth on this day a day before Navratra begins..

I give you a link of a person who has described it beautifully in his blogs..
soullens.blogspot.com/2008/09/shradhs-or-pitru-paksha.html

"To ensure that the soul does not remain in a subtle body hovering on this earth planet, but will attain a comfortable body for enjoyment on pitr loka, offerings are made to the departed person and the pitrs. During the asauca period daily offerings of sesame and water, and pinda (rice mixed with sesame, ghee and honey) are given to the departed person. On the eleventh day (for a close relative of a brahmana) the house is purified, eleven brahmanas are fed and offerings are made to the deceased. Beginning on that day, for the first year, monthly sraddha ceremonies should be held. As well, in the sixth and twelfth month additional sraddhas should be conducted. Then every year, on the tithi of the decease, annual sraddhas should be conducted."

I shot this for about 3 hours than returned home tired and totally dehydrated I was bare feet and on my 27 th fast of Ramzan.

Pitru Visarjan I did not want to miss this year so I came here after partaking my fast.. to share the quintessential nature of my ongoing series on Hope and Hindutva a message of Peace.

There is an incident I must mention here , I saw a Muslim man with beard and a skull cap in this totally Hindu surroundings I am an exception I dont look what I am because of my attire and my outlook.

I shot the Muslim man from far , later I approached him, I asked him politely what had bought him here , he pointed down below his Hindu friend who bald was undergoing prayers for the soul of his ancestors.

For me this is the nature of Indianess that I like it touches us all despite our religiosity the sense of sharing our cultures, mutual coexistence and peace and amity..

Durga Leaves The Workshop for Nasik 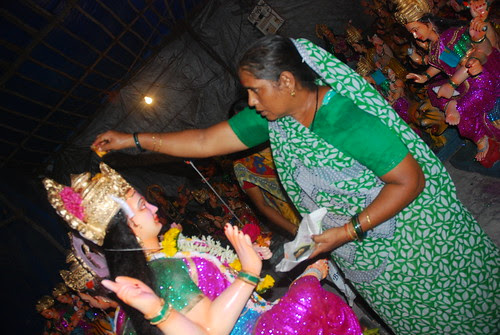 This was a family that was taking Durga from the workshop to CST station by handcart and from there by train to Nasik..I shot this entire series at Mr Rawles Durga workshop at Lalbagh..

A small puja was done for her safe journey by the head of the family.

All these years never have I asked the devotees or Mr Rawle the cost of the Durga idol. I shoot the ethos of Durga Ma and this is enough for me, Durga Ma who touches all those who love and worship her. 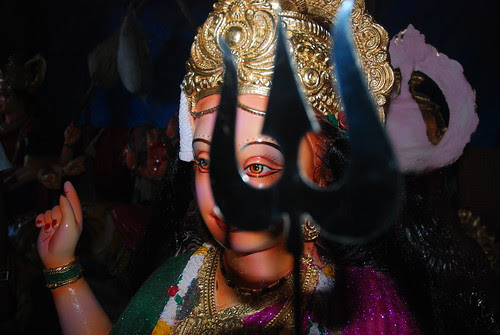 Mr Rawle and Me 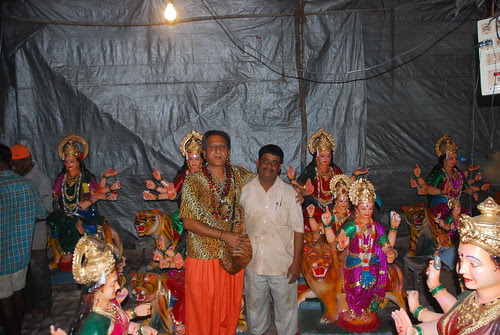 Mr Rawle and Me, originally uploaded by firoze shakir photographerno1.

Mr Rawle is a eminent sculptor and his workshop at Ganesh Gully Lalbagh is a very famous one , I have been visiting his place year after year to shoot the Ganpatis and Durgas. 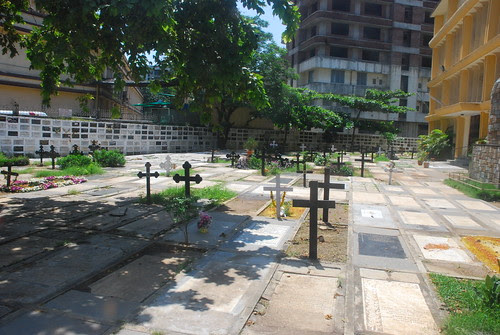 you were born
you lived
you cried
you lied
you died
on a one way street
your performance
comes to an end
your journey complete
death you could not cheat
he stopped your mortal
heart beat ..
buried without shoes
all barefeet
dust to dust
ashes to ashes
humidity and heat
face to face with
your maker
on the hot seat 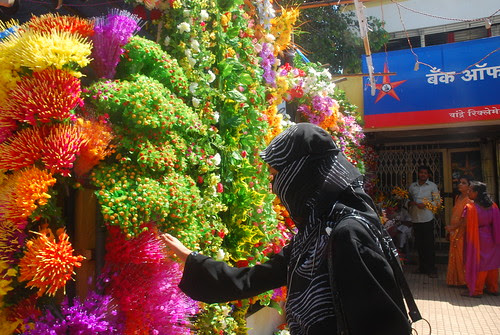 Today is the last Friday of Ramzan also known as Al Vidai Jummaa.


Ramzan has almost come to an end, and actually the spirit of Ramzan on the Muslim soul should be deeply embedded , Ramzan is a state of mind a state of piety , ibadat, a state of godliness the cornerstone of Peace and Brotherhood in Islam.


Ramzan waking up for the Roza, the saheris the iftars the namaz will become a part of our memories and the memories of our children ..our grand children too.

At Iftar time my grand daughter pulls her father calling him Abu towards theI dining table.. urging him with broken words..Abu Roza Kholo.. Dad please break your fast- she is barely 22 months old and a tenet of Islam called Ramzan emanates her childhood spirit too.

Ramzan is Islam without sectarian barbed wires as they grown on our souls by those who have destroyed the true meaning of our Faith.
Ramzan is so much and so much more.
Ramzan is amity with our neighbor irrespective of caste color or creed.

Ramzan is searching for the crescent from the minaret of Peace.

Ramzan ushers Idd , after the Namaz the greetings , the bear hugs , and delicious Sheer Korma , Mutton or Chicken Biryani and sharing these victuals with our loved ones.

I have two sets of pictures being uploaded on Flickr - on one uploader Mount Mry Fair 2009 , on the second Uploader Durga Workshops of Lalbagh and this solitary post on the third uploader.

I had begun my fast this morning and at 5 am took a train to Grant Road, from Grant Road to Banganga Walkeshwar by cab to shoot a very unique moment for the Hindus from Uttar Pradesh, migrants who shave their heads , and offer Puja on the banks of the Banganga Walkeshwar to appease their forefathers.. called Pitru Visarjan.. I shot this barefeet for 3 hours a 3 GB Card.

I came back by train showered and rested but this event has tired me completely..

So this too becomes a part of last Friday of Ramzan, sharing my countryman's culture with all of you..after both the streams are completely uploaded. 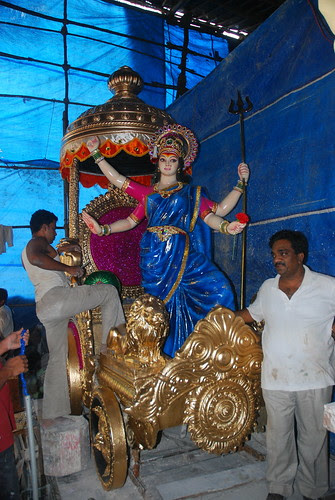 Mr Khatu has his sculpting workshop at Chinchpokli, I have been shooting here since several years.

I dont know what made me come here via Lalbagh after shooting Mr Rawles workshop.

Mr Khatu inquired about my Ramzan fast and than told me that like me there was another Muslim lady Zubeida who has been installing Durga at her pandal at Vakola behind St Anthonys Church since 29 years.

I met her she was fasting too.
This Durga on a horse ridden Chariot needed over 75 people to tow it from the workshop too the truck outside.

They struggled in vain as it was getting late I left this place aborting the shoot.

Today is the last Friday or Akhri Jumma of Ramzan..

I have begun my fast but shall leave in a few moments to shoot another Hindu feast , the most exciting and invigorating.

I have learnt you can be a good Hindu by being a good Muslim too, and by this I mean respecting the other persons ritual and religiosity and vice versa.

I take Hinduism as my cultural inheritance, and thus continues my tryst with mutual coexistence and a message of Peace I call Hope and Hindutva.


As a Muslim Indian born Shia I am happy that I was born in India the land of Love and Hospitality, away from bigotry barbarism and hate as one finds in neighboring surroundings.

India emanates the freshness of the human soul touching all of us..

The Contorted Beggar and Marziya

Marziya gives him Rs 10/
The contorted beggar comes here all the way from Colaba .I have been shooting him for several years. 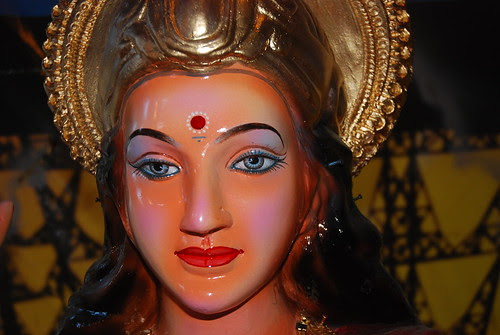 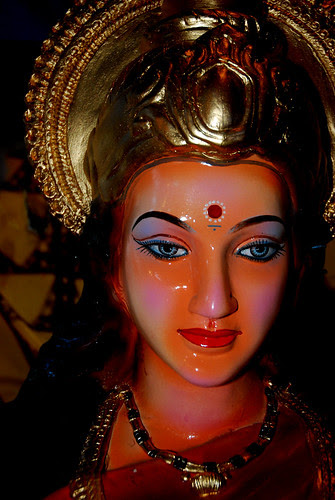 I simply could not stop shooting this beautiful Goddess , there was some inherent magic that held me and my camera captive..its as though everything had come to a standstill all around me.

This was shot at Mr Rawles workshop at Lalbagh , from here I went to Chinchpokli to shoot the workshop of Mr Khatu and was accidentally became party to a wonderful story , a Muslim lady Zubeida and her husband Taher have been installing the Goddess at Vakola for last 29 years.
So here was a Muslim blogger shooting the cultural harmony of two faiths..Zubeida told me by installing the Goddess Durga she does not become Hindu, like me she too was fasting, and her Goddess was a chariot ridden one with 4 horses , it need over 75 people to lift the Goddess , I could not wait , so I took a cab back home ..I was already late.

Press photographers were in abundance to shoot Zubeida and her Goddess Durga.

Zubeida has invited me to the Arti at her Pandal at Vakola behind St Anthonys Church..