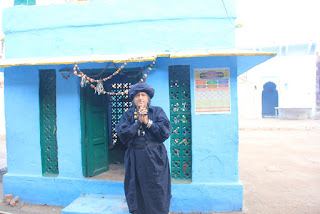 Panihar is on the Indore Gwalior to Indore Highway , the roads real bad inaccessible till the village , this village is a mix of Hindus and Muslims ,,from Gwalior station to reach Panihar I was to give the ricksha guy Rs250 and than he told me he would be returning back to Gwalior , empty I gave him another Rs 200 ,, because it was very late in the night ,,
Panihar is the seat of the Asqan Malangs and here lie the ancestors of Syed Masoomi Ali Baba ,, now I will explain to you about the Malangs ,, Malangs are only among Syeds ,,ancestry of Janabe Fatima ,, there maybe other Malang orders but Hazrat Ali is the fountainhead of the Madarriya order affiliated to Hazrat Zinda Shah Madar ,,even the Qalandaris Rifais Chishtiyas etc are all interconnected to the Sufi order of Madariyya .
Syed Masoomi Ali Baba is a celibate ,, Dam Madar Malangs malangs have to be celibate and must grow their hair..the next Malang peer will be the nephew of the reigning head of Malangan.. so Syed Masoom Ali Babas inheritor of his seat at Panihar and Makhanpur is his nephew Syed Razzak Ali Baba he is very young and an Islamic scholar ,,,he is wellversed in the traditions of the Malangs he was initiated as a Malang when he was 7 year old .
He is a bit camera shy but I shot a video..he took extreme care as I was suffering from a viral stomach ailment ,, this grand event was in memory of his mother who untimely death was a tragedy,.. Razzak Baba I think is not more than 27 year old or younger ,,the langar community dinner was for over 50000 people Hindus Muslims Dalits combined sharing the same platform..
The Hindus consider Syed Masoomi Ali Baba an avatar of Lord Shiva ,, his dread heads are about 18 feet long,..
Along with Syed Masoom Ali Baba is his main malang Syed Rafik Ali Baba a great Malang scholar ,, orator and my dear friend ..we are both malang brothers ..he has been my greatest supporter he calls me Maulaiee ,,
My Shia background my Shia ancestry my Shia ethos has added this Malang dimension purely out of being a follower of Imam Ali ,,
Despite living in a village ,, no electricity no internet no mobile network.. I was well taken care of ,, I met some great poets scholars at the event and was impressed by Dr Inthikhab Alam Jaffery of Makhanpur ,,
And The Gaddi Nasheen of Dargah Zinda Shah Madar Hazrat Baqi Sab..
But what really humbled me was young kids who had seen my cameo in Mr Raj Kumar Santoshis film Phata Poster Nikla Hero produced by erstwhile Mr Ramesh Taurani..came surrounded me to give them autographs others taking selfies with me in this village .
Another awakening here was a devotee a Hindu wealthy Patel from a wealthy family of Jaipur Gopal Badshah ,his adopted father is Liaqat Ali Baba Malang who is my peerbhai.. Gopal Bhai is decked in gold ,,dresses in white carries a golden plated Hookah with an attendant from Jaipur ,, he became my friend calls himself Mohomed Ali Momin.. both his kids are doing MBBS ,,
He is well known among the Qalandaris Madaris and has built a safe house for travelers at Kaliar Sharif Panipat .
I am posting my documentary in my new set at Flickr ,
By Firoze Shakir Photographer No1 - January 30, 2016 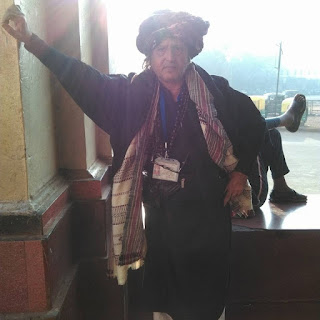 Just come back from a Dam Madar Malang event at Panihar village 22 km away from Gwalior .
Panihar has Hindus Muslims living in peace . The simple rustic Hindus consider the Malangs to be avtars of Lord Shiva ..and I have never seen such amity anywhere else ..The Malangs had a langar for the villagers and fed over 50000 people at one time.
But all in all I missed Mumbai my heart soul was in Mumbai .

A Muslim boy related to the Malang head took me on a hillock he was about 11 year old holding my hands he bought me to the oldest Durga Mandir. The head priest other Hindus touched my feet they gave me money and were touched by my visit and my greetings Om Namo Narayan...

They told me incredible tales of my Malang Peer Syed Masoom Ali Bawa when he first came to the village there was a drought no rains he opened out his hair he has dreads about 18 feet long and invoked God standing for hours on one leg they said it rained and rained and the villagers thanked the Lord by having a langar and to show his love for God , Syed Masoom Ali Bawa jumped into the cauldron of hot oil nothing happened to him today they rever him as a living saint .
He has built wells schools clinics for them he lives in austerity .

He had invited me to this event of his nephew Razzak bawa Gaddi Nasheens mothers chalisva it was to mark to pay tribute to her memory 40 days after her death.

I lived here with the villagers and documented the Sufi order of the Malangs . 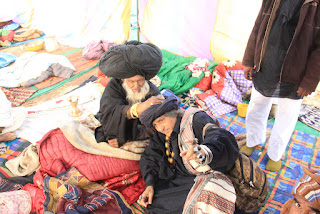 Panihar is 22 km away from Gwalior railway station ,,a rustic village hardly any good roads and is on the Gwalior Indore highway... This is the personal seat of the Aqsan Madirrya order and its head Syed Masoom Ali Baba  ,

I was invited to Panihar for the celebrations of his nephew Razzak Ali Baba whose mother had passed away 40 days this was an event to commemorate the memory of Razzak Bawas mother ,, Lots of scholars poets Maulanas Alims from the various Sufi and Sunni school of thoughts were here .

It was held on 28 January,... and this is one unique village that both Hindus Muslims live in eternal peace , this is my new set at Flickr documenting the lifestyle of the Malangs ,, I too belong to this Sufi order ,,
I shot stills videos and my Malang brother Syed Rafik Ali Baba was very helpful.. he is a Madarriya scholar and highly respected among  other orders too.

I had a lot of discourses with young Razzak Baba who is the Gaddi Nasheen of the Aqsan order of Dam Madar Malngs here Painhar as well as Makhanpur ,