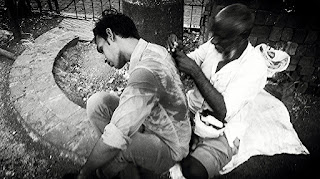 I did not know how to shoot a video..and in the early years I would request close friends to shoot Marziyas videos ,, she was a great kid ..I wanted to document her growth as an intuitive child and as a young street photographer but I could manage just one video of her toddler days , and it hurts terribly she is 7 now ,,hardly any videos of Nerjis .. save the one stitched together by Assad Dadan of all three Marziya Nerjis an Zinnia my 3 granddaughters .
After coming back from Hyderabad I began shooting videos earnestly on Motorola G , I than shot videos on my next phone Xiaomi but the videos became temporary files I was given a defective Xiaomi by Flipkart , I blasted them with my tweets they replaced it with a new Xiaomi , their technician checked the phone it was defective too they refunded the amount , my son gave me a Lenovo ,, and finally a Windows phone Lumia another bad phone from Flipkart , my son bought it for 10 K and sold it to a friend for 4 K..
Finally after exchanging 2 old Motorola G s first generation and son added 15 K I got the HTC Desire 826 , so most of my videos are shot on the HTC...
I still dont know how to edit stitch videos , so I shoot raw stock footage as is where is ..so far I have shot 525 videos ,, only 4 or 5 videos were not shot by me ,my oldest ones Moharam related .
The rest 510 are shot by me , in about 3 or 4 months ..
I hardly take my camera out unless I am specifically shooting a feast or an event ,, otherwise both my cameras are locked up in a lit up cupboard ..I shoot with my mobile phone ,, impulsively ,, if I am near Bandra Talao I shoot the ear cleaners passionately I become the model and the videographer using Selfie mode..
I have just come home shooting a few videos of Nabi Bhai Ear Doctor Wax remover ,,but I am evolving funny thing to say at 63 ,, I shot the streets with my mobile phone now I video shoot my street subjects , some I talk interview very casually without any script ,, and I am enjoying it I use my mind imagination.. for the first time I gave a commentary on the ear cleaner while I shot him cleaning the ears I put my views my thoughts and though I have disabled comments on my You Tube videos I have left one open. I dont want to be trolled with sick peoples views . I did not shoot for them I did not borrow their camera , I used my camera and my fucked vision.. period ,,
You dont like it too bad move on.. you are not my target audience I dont pimp my videos pictures by tagging you I dont post my shit on your commode of a timeline ,,
I use moderation before I upload before I Shoot .. my pictures are uploaded at Flickr videos at You Tube , sometimes I blog directly at Facebook like this one it will be copied to Flickr Blogspot and a Tweet ,, I dont use Ello anymore ,, I got over the initial euphoria basically Ello is for Facebook rejects , and GIF obsessed nerds ,, I am out ,, it was good for sometime ,,
Well back to my street video shooting I shoot videos on my Canon 60 D I have not yet shot videos on my Canon 7 D ,,,
And I am learning by trial error I dont watch videos on how to shoot videos I simply shoot ,, everyday to hone my skill I shoot garbage I have shot over 75 garbage videos ,, I shoot playlists ,, of diverse subjects ,,
I shoot impulsively ,, for fuck sake ,, there is no method to my madness ,, I shoot with my eye and I spot a video to be shot much before I shoot it , and my channel is growing .. but I am yet to earn any money and I have vowed by sweet Jesus and Jheovah if I do make money I will pay the school fees of the girls staying in the slums ,,,studying in Municipal schools NO I will not give a penny to a Madrsa ,, I think Madrsas are only meant to create Mullahs ,, and nothing else , yes I am biased opinionated and I am happy I think differently and convent school s if a poor child can afford it is million times better than a regressive Madrsa or the regressive Municipal school..
So what I shot today as video has also changed me I now see things objects situations cinematically more clearly and more cosmically ,and though I am an intgral part of Bollywood I dont watch films Indi Hindi English at all I film the streets I dont see TV at all ,,this is my penance and I took it at the Pushkar Mandir ,, along with walking barefeet as much as I can...in 2005 ,, I think .and only Lord Brahma is aware of it ,, I meet him once a year..during my visit to the Great Sultan of Sufism Khwajah Garib Nawaz of Ajmer Sharif.
I only saw the clip of the film I acted in but not the entire film.. so I am what I am but not a fucked positive Spam...Phata Poster Nikla Zero.. Feroz
By Firoze Shakir Photographer No1 - October 18, 2015