About The World Of Rafaees ... 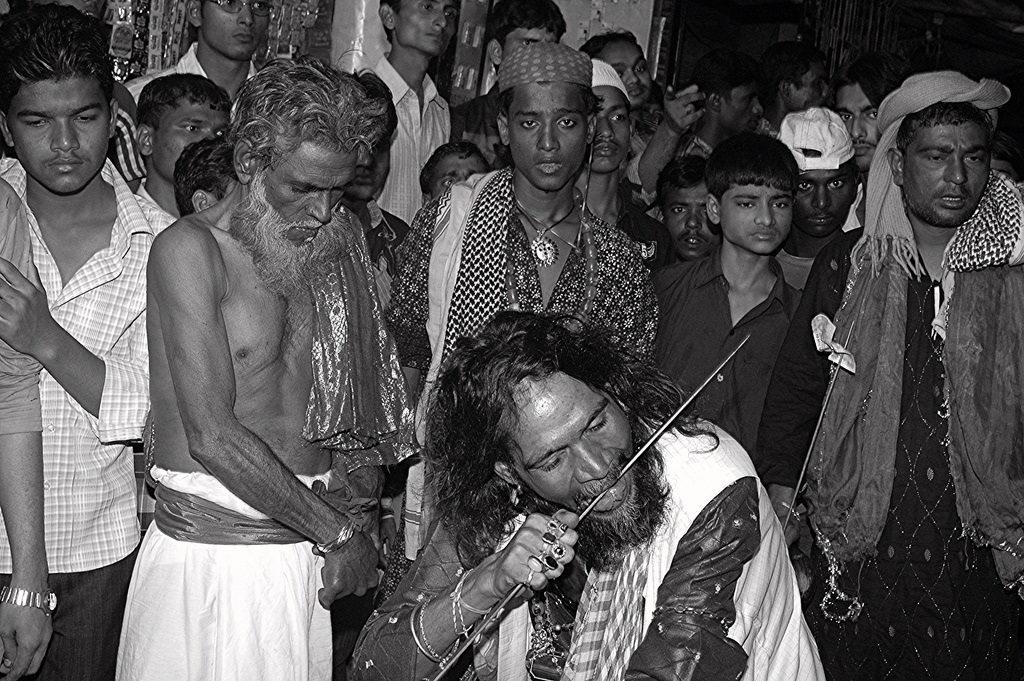 I was always fascinated by diverse ethnicity that makes up the weft warp of unseen India .. its only some photographers like me who are passionately dedicated to shooting them , documenting their lifestyle customs rituals I do not proselytize their order nor their religious beliefs I am only interested in them as a person or people photographer .

And I had to overcome their fear of the camera , the reason why I was photographing them and all this much before I came on the net and began photoblogging their way of Life .

I was not going to deface their ethos into a coffee table book and honestly I shot them for myself..I met many hurdles and I can reiterate it was not easy shooting them I did not take notes on their Order , nor did I go out to journalize their history .. I simply wanted to shoot them and because my sartorial persona matched them in more ways than one they reached out to me as I reached out to them.

I did not indulge in their love for the chillum , I was a smoker once but had given up drugs and booze.. and this order is strictly not into alcohol.

Ganja Hashish opium.. is what some partook that is why at the Dhuni you met hardcore drugaddicts becoming Murids of the Bawas to get free hash.. a few asked me to contribute for the hash but I refused instead I gave money for tea milk or food .. no drugs .

Perhaps this attitude and my own lifestyle made me enemies with some of them ..and I came to the Dhuni during the Urus barefeet , after my work was done and walked back from Mahim to Bandra every night ..it was tough getting a cab.

I tried not to shoot the hangar ons or the local boys ,as my attention was only on the Rifais , their moods , temperament , their style of cooking on the Dhuni no kerosene no gas .

Rich food mostly dal rice chapati and vegetables but if someone donated a goat than it was mutton korma and pullao.

I had documented the Rafaees under various Murshads the first being Late Sikandar Wali Bawa .. but there was a short fused misunderstanding he had me banished from this group, I returned after a gap of one year thanks to a few friends under the new Murshad Handi Sai who knew and respected me a lot .. He visited my store those days and I already told you that part of the story , but before he died I met him at Haji Malang he had overdone the drug part and was in bad shape , and when I met him at the Rafaee Chowk.. I could visualize vultures hovering over his body , I fled from there leaving him aghast at my sudden flight ,,

Than I came to know he died at Kota Rajasthan..


I went to the Dhuni during the short tenure of Barsati Baba Amanat Ali ..


And than the group splintered Farukh Bawa,Hassan Ganda Faiyaz Ali all going their different  ways but we met at Jalali Chowk Ajmer Sharif Urus .

And in 2011 I became a Dam Madar Malang and began documenting the Madarriya Order , this order fascinated me more than the Rifai Silsila .

And I met the head Rafaee Mehboob Ali of Mumbai , a tall famous figure I knew him from Mumbai ,,,and this was my documentary on the Chancawalli Rafaees based out at the Dargah of Shansawalli At Andheri East.

This year sadly I could not meet them as I was in Lucknow during both the Mahim Urus .


These are pictures from the past most of the guys are dead ..and the person in the picture is Murshad Late Handi Sai..
May His Restless Soul Rest In Peace.
By Firoze Shakir Photographer No1 - January 01, 2015

Email ThisBlogThis!Share to TwitterShare to FacebookShare to Pinterest
Labels: about rafaees, rifai silsila

Wishing You All A Very Happy 2015 ..Thanks For Visiting My World Of Poster Cards 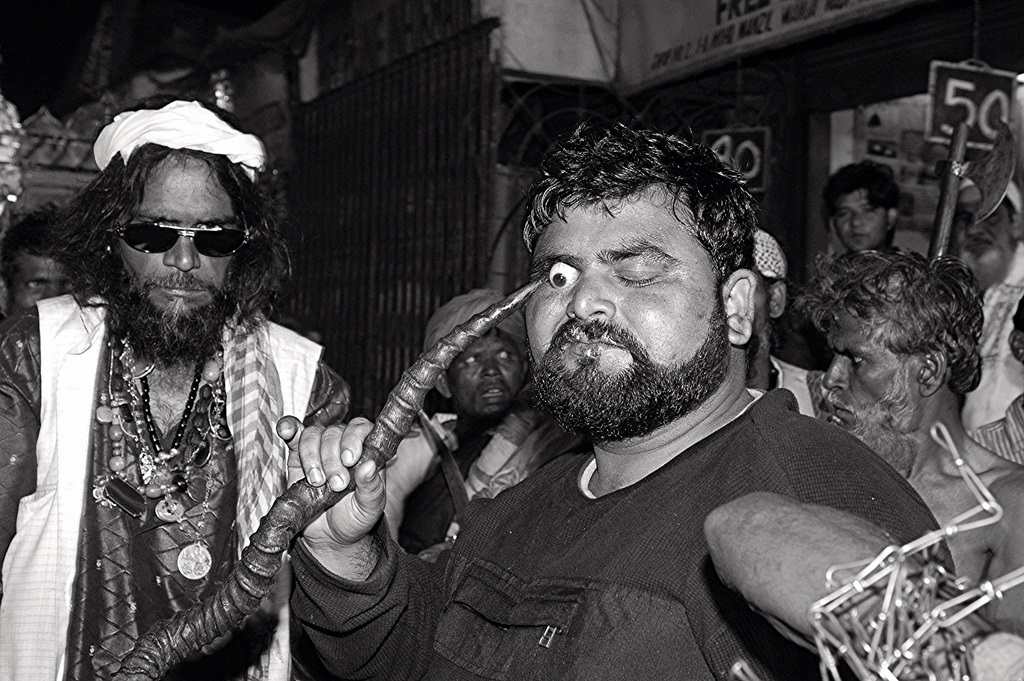 Piercing The Head With A Sharp Rod .. The Rifai Silsila 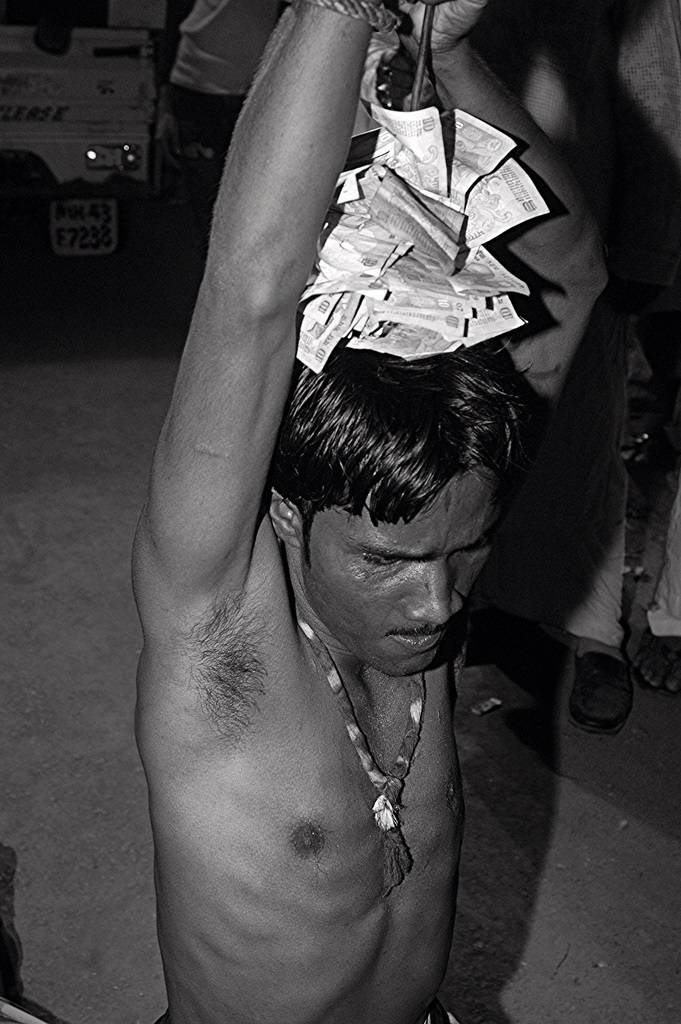 After he had inserted the rod into his head people who gave him money placed it into the rod at the other end.

And I never saw this Rafaee again..this shot at Mahim in 2005 and there was a time I could not stay away from these events ..

As a photographer I was clueless I shot many things , birds bees , flowers , waterfalls sunrise sunset but eventually as time elapsed shooting religious festivals , Urus , I took more interest shooting street life street pain all as part of my repertoire .

And it dawned on me thanks to late Fred Miller that I was a street photographer a genre I shot but could not club myself in.

And poetry juggling with words on a few pictures became part of my visual history.

I wanted to shoot the underbelly of religious ritualism , possession exorcism without hurting or ridiculing the people I shot , and though I was a Shia born Muslim I smoothly paved my way into this form of Indian Sufism  called Rifai Silsila ..and these were not easy folks to shoot , they had their spirituality a unique life style  ..I met resistance from some who thought I was shooting them to expose their smoking hash , others thought weird things but one common thought I was shooting all this to sell pictures and make money.

And I suffered this ignominy silently , till I bought Late Handi Sai to my design studio , showed him my actual profession those days , and he looked at my world of glitz and gloss Bollywood glamour , took me aside and told me seriously ,, you should become a Rafaee .

I smiled , and respectfully told him I liked their rituals but was happy cutting my head with real blood during Ashura and politely refused his kind offer .

Till he was alive Handi Sai considered me a good Murid friend wellwisher I had lots of rejects sleeveless jackets , shirts kurta pajamas that I gifted to him to give to his group that were poor and impoverished ..So it was this bond this trust that gave me access to their world cut off from the mainstream.

And than years later in 2011 I became a Malang with my Belgian friend , and there was no need to become a Malang but I guess it made it easier to document this Sufi group, followers of Ali.. and lived an austere lifestyle .

And similarly I met the Nagas at Kumbh Mela befriended them , and attained a Guru a learned man a teacher who had become a Naga Sadhu a man adept in Islamic scriptures I took him as my Guide shot The Nasik Kumbh and the Maha Kumbh thanks to Vijay Giri Maharaj of Juna Akhada .

But one person who really fascinated me with his Tantrik knowledge grasp was Kapoor Khamkhya from Hardwar affiliated to Goddess Khamkhya . I met him at the Kumbh , and did not have much time .. but we keep in touch and I hope to shoot the Khamakhya temple with him in Guhawati  Assam. 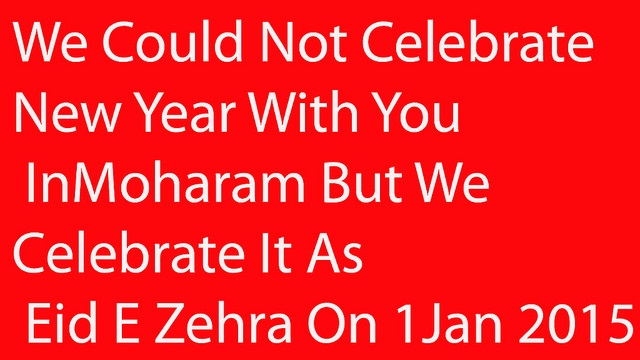