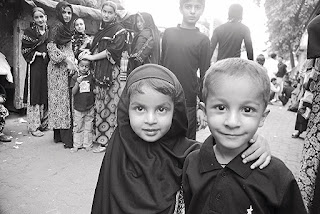 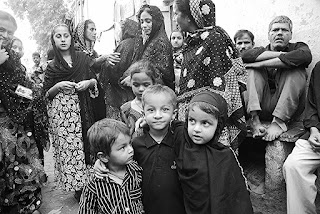 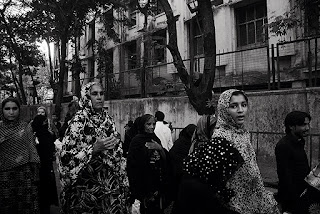 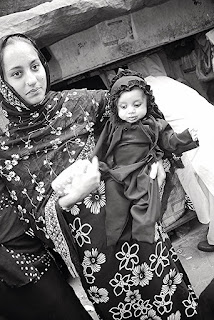 The passion and love for Imam Hussain by the Baluchi Shias needs to be documented ,,the Baluchis who live in the distant suburbs of Thane Kalyan Kalwa come to participate in Chehlum 40 day of the Martyrdom of Imam Hussain at Imamwada Mumbai , you will see  them in groups sitting outside the Iranian Mosque Moghul Masjid dressed in black clothes ,,flowery prints , chubby kids and having Niyaz e Hussain..

I dont participate in Moharam in Mumbai so I have not seen them since 2011 ..but this race has fascinated me , it is robust and strong.. and you see them once a year during Chehlum only ,,

Most of the Baluchis accidentally get identified as Iranis ..but they have their ancestral pride and love for their heritage and roots ,, there were once many rich Baluchi businessmen .. you can see the ornate tiled Baluchi graves at the Rehmatabad Shia cemetery.

During the Urus of Haji Malang at Kalyan you will find Baluchi women selling glares outside the station.. they dont like being photographed ,,,

Email ThisBlogThis!Share to TwitterShare to FacebookShare to Pinterest
Labels: Lovers of Imam Hussain - The Shia Baluchis 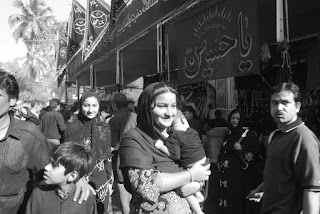 The Shia Baluchis come from all over Maharashtra , predominantly from Kalyan Thane Kalwa area I know most of them as they sell glares etc at Kalyan station , and are a very honest enterprising hardworking race, fiercely proud of their Baluchi heritage and culture and tradition.

They come to Mumbai in hordes during the Chehlum Arbaeen feast of mourning for the Shias all over the world.

The Baluchi nobility lies buried in Rehmatabad Shia cemetery, their graves are made of ornate Iranian tiles and are really beautiful piece of art and creativity.

I have a lot of Shia Baluchi friends but have been unable to visit their Imambadas in Kalwa and Mumbra.

The Shia Baluchis hold pride of place in our Shia community they stay among themselves and hardly mix with the other Shias.

They are a peace loving community congenial polite and good natured .

Their children are absolutely living dolls ..

Arbaeen ,,, Chehlum..40 Day Of The Martyrdom Of Imam Hussain 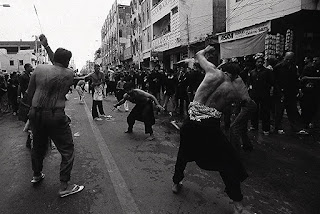 Chehlum is intense among the Shias in India ,,I have shot Chehlum in Mumbai Hyderabad Lucknow Delhi and Hussain Tekti Jaorah till date ,, it is moment of grief profound pain in the memory of Imam Hussain grandson of the Holy Prophet , Imam Hussain was martyred at Karbala by the accursed forces of Yezid th Caliph of the Umayad Dynasty..
In every city where the Shias take part in Chehlum you will see a sea of black clothes , bleeding faces and bleeding backs due to Kamazani and Zanjir zani, matams during the procession .. from the Imambargahs till the Shia cemetery,,

The picture above was shot in Hyderabad ,,


(Arabic: الأربعين‎, "forty"), Chehelom (Persian: چهلم‎‎, Urdu: چہلم‎, "the fortieth [day]") or Qırxı, İmamın Qırxı (Azerbaijani: امامین قیرخی, "the fortieth of Imam") is a Shia Muslim religious observance that occurs forty days after the Day of Ashura. It commemorates the martyrdom of Husayn ibn Ali, the grandson of Muhammad, which falls on the 20th or 21st day of the month of Safar. Imam Husayn ibn Ali and 72 companions were killed by Yazid I's army in the Battle of Karbala in 61 AH (680 CE). Arba'een or forty days is also the usual length of mourning after the death of a family member or loved one in many Muslim traditions. Arba'een is one of the largest pilgrimage gatherings on Earth, in which up to 30 million people go to the city of Karbala in Iraq.[1][2][3][4][5]

The Arba'een pilgrimage has been observed since the year 61 AH of the Islamic calendar (October 10, 680) after the Battle of Karbala or the following year.

According to tradition, the first such gathering took place when Jabir ibn Abd Allah, a salaf, made a pilgrimage to the burial site of Husayn. He was accompanied by Atiyya ibn Sa'd because of his infirmity and probable blindness. His visit coincided with that of the surviving female members of Muhammad's family and Husayn's son and heir, Imam Zain-ul-Abideen, who had all been held captive in Damascus by Yazid I, the Umayyad Caliph. Ali ibn Husayn Zayn al-Abidin had survived the Battle of Karbala and led a secluded life in deep sorrow.It is said that for twenty years whenever water was placed before him, he would weep. One day a servant said to him, ‘O son of Allah’s Messenger! Is it not time for your sorrow to come to an end?’ He replied, ‘Woe upon you! Jacob the prophet had twelve sons, and Allah made one of them disappear. His eyes turned white from constant weeping, his head turned grey out of sorrow, and his back became bent in gloom,[a] though his son was alive in this world. But I watched while my father, my brother, my uncle, and seventeen members of my family were slaughtered all around me. How should my sorrow come to an end?’[b] [6][7]

Arba'een's performance has been banned in some periods, the last of which was when Saddam Hussein, was president of Iraq. For nearly 30 years under Saddam's regime, it was forbidden to mark Arba'een publicly in Iraq. Following the 2003 invasion of Iraq, the observance in April 2003 was broadcast worldwide.[8]

Annual pilgrimage[edit]
Main article: Arba'een Pilgrimage
Arba'een is consistently among the largest peaceful gatherings in history. The city of Karbala in Iraq is the center of the proceedings which many pilgrims travel miles on foot to reach. The distance between Basra and Karbala is a long journey[9] even by car, but it is traveled annually on foot by Iraqi pilgrims, which takes them two weeks, or approximately one month to come from other countries like Iran. The crowds become so massive that they cause a blockade for hundreds of miles. In 2008, approximately nine million religious observers converged on Karbala to commemorate Arba’een.[10] However, in 2009, the number of people visiting Karbala on Arba'een significantly increased. According to BBC News and Press TV, over ten million people had reached Karbala one or two days before Arba'een. The number of pilgrims was expected to rise to 18 million during the next two days. In 2013, Arbaeen reached 20 million people from 40 countries.[11][12][13] A car bomb targeting worshippers returning from Karbala killed at least 20 Shiite pilgrims in January 2013.[14] In 2014, up to 17 million people made the pilgrimage and many choose to make the 55-mile journey on foot from Najaf, near areas controlled by the militant Islamic State of Iraq and the Levant (ISIL), which has declared Shia Muslims apostates.[15] There were no reports of major incidents at 2014's Arba'een, which was considered a success against ISIL by the governor of Karbala, Akeel al-Turaihi.[16][17]

Ziyarat of Arbaeen[edit]
Main article: Ziyarat of Arba'een
The Ziyarat Arba'een is a prayer which is usually recited in Karbala on the day of Arba'een. It is narrated from Safwan al-Jammaal from Imam Ja'far al-Sadiq, the sixth Shiite Imam in which the Imam instructed him to visit Imam Husayn's mosque, and to recite a specific visitation prayer on Arba'een by which believer should reaffirm their pledge to Husayn's ideals. The Ziarat or prayer is a text which designates Husayn as the "inheritor" of Adam, Noah, Abraham, Moses and Jesus. there is some nots from Ziyarat of Arba'een .

He met with deadly dangers, acted justly and fairly, made use of everything belonging to him to pay full attention to give sincere advice, took pains, made every effort and put his heart, mind, soul and life at the disposal of Thy mission to liberate the people from the yoke of ignorance and evil of bewilderment, but an evildoer, deceived with empty hopes of mean and worthless worldly gains, had pressed heavily on him, and sold out his share (eternal bliss) for the meanest and lowest bargain, betrayed his "day of judgment" for a vulgar return, took pride in insolence, fell into the fathom- well of silly stupid follies, provoked Thee and Thy Prophet to anger, did as the harsh discordant, the hypocrite, the heavily burdened bearers of sin, condemned to Hellfire, advised to him, however, he (the Holy lmam), steadily, rightly and justly coped With them, till, in Thy obedience, gave his life after which his family was set adrift.[18]

Other religions and countries in the Arba'een[edit]
While the Arba'een is a distinctively Shi'a spiritual exercise, Sunni Muslims and even Christians, Yazidis, Zoroastrians, and Sabians partake in both the pilgrimage as well as serving of devotees. Pilgrims from European countries including Sweden, Russia and even a delegation from Vatican City have joined in past observances. Some Iraqi Christian religious leaders also joined the delegation from the Vatican.[19][20]

Many delegations from various African countries including Ghana, Nigeria, Tanzania and Senegal have also participated in the Arba'een.[13]

Since the first Arba'een, it has influenced subsequent Shi'ite uprisings against Umayyad and Abbasid rule. Arba'een has also been used as a political protest, at least in Iran. It was first used there to protest the killing of supporters of Ayatollah Ruhollah Khomeini in Qom on June 5, 1963 when a general strike was announced. A cycle of Arba'een public observance of mourning rituals of martyred protestors — where an Arba'een observance was held to commemorate those killed in the preceding Arba'een protest demonstration — is often credited as part of the reason for the success of the 1979 Iranian Revolution that overthrew Shah Mohammad Reza Pahlavi,[22] although that explanation has also been questioned.[23]