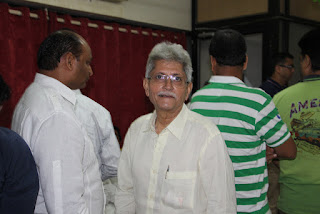 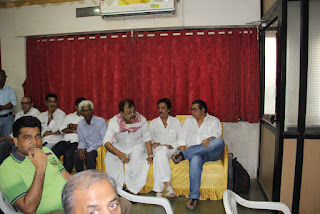 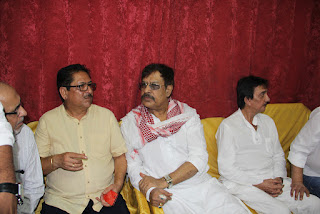 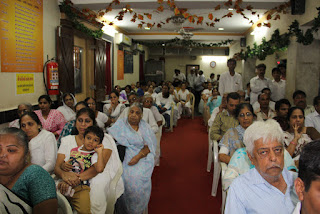 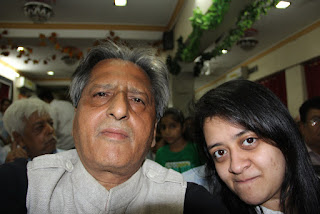 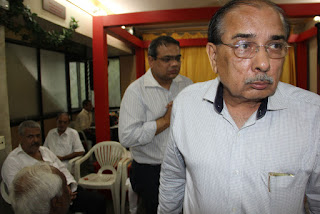 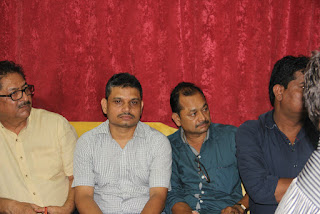 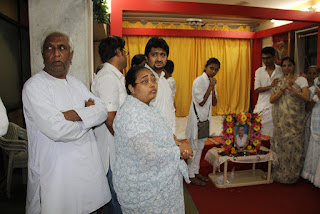 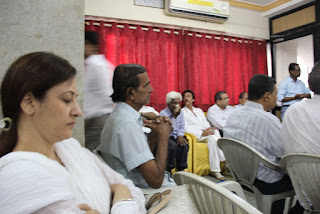 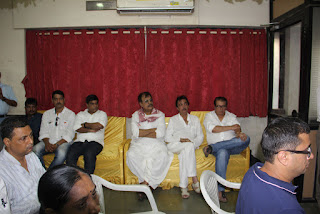 A gathering of family relatives friends wellwishers and scores of people that Mr Rasik Solanki had touched with his love ,, good thoughts deeds and actions .


sarva-dharman parityajya
mam ekam saranam vraja
aham tvam sarva-papebhyo
moksayisyami ma sucah
When Krishna says leave all Karmas, He means that one should mentally renounce the fruits of actions, better still even the performance of Action
This is the Karna Mantra.
My humble tribute to my dearest friend ,,,
These wise words from the Gita will console the grieving heart in our saddest moments
na jaayate' mriyate' vaa kadaachin naayam bhuthva bhavithaa na bhooyah: |
ajo nithyah saasvato'yam puraano na hanyate' hanyamaane' sareere' ||
"Never is he (Soul) born, nor does he die at any time, he has never been brought into being, nor shall come hereafter; unborn, eternal, permanent and ancient (primeval). When the body is slain, he is not slain."
nainam chindhanthi sasthraani nainan dhahathi paavakah |
na ch'ainam kle'dhayanthy aapo' na so'sayathi maarutah" |
"No weapon can cleave him; nor the fire burn him,
no waters can make him wet, nor the wind dry him up."
acche'dyo' yam adhaahyo' yam akle'dhyo' sya eva cha |
nithyah sarva-gathah sthaanoor achalo' yam sanaathanah: ||
"Uncleaveable is he; he is not burnt; nor be wetted and neither be dried;
Eternal, all-pervading, stable and immovable is he from everlasting time."
avyaktho' yam achinthyo' yam avikaaryo' yam uchyate' |
thamaad e'vam vidhithvainam naanusochitum-arhasi ||
"He is spoken as invisible, unthinkable and immutable;
therefore, you ought not to grieve comprehending as such."
jaathasya hi dhruvo mr.thyur dhr.uvam janma mr.thasya cha |
thasmaad aparihaarye'rthe' na thvam sochithum-arhasi ||
"For death is certain to one who is born; to one who is dead, birth is certain;therefore, thou shalt not grieve for what is unavoidable."
Om Shanti Om.
Dhairya Solanki
www.youtube.com/watch?v=F-dQm1P6ycU&feature=youtu.be

On The Passing Away Of A Very Dear Friend ,, 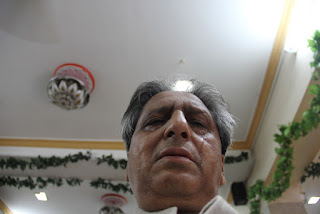 As I sat at Rasik Solanki bhais prayer meet I was reminded about his wedding day , his wedding wardrobe was done by me and he looked dashing dynamic and debonair ,, We were all married and now he had joined our Marital Club.
After I left Mr Nitin Manmohans Prachins where I handled the costume and styling .. to go independent Nitinji shut his fashion store after all he was an iconic filmmaker he had directed Sunil Shettys Prithvi a Neha Arts Production.
I had done Army Dannyjis exotic costume and the rest of the actors .. as Solanki Bhai was handling accounts we interacted a lot , and even after Prachins shut down Nitinji saw that I got work from their banner , he would ask me to do his personal clothes and formal stuff for Soham his son.
We met at weddings of friends relatives of Nitinji.. we had great happy times during his nephew Neerav Panchamiyas wedding in Pune son of his brother erstwhile Hemant Bhai Panchamiya or at Mr Nitin Thakkars son Mituls wedding .
We never met at funerals this was the first time .
Nitin Manmohan Sabs father Mr Manmohan was an actor well remembered forr his villain roles and his generosity .. once at a party at his house a guest complimented Mr Manmohan on his dapper styled shirt Manji as he was called ,smiled excused himself .. went to another room gift packed the shirt he was wearing and gave it to his close guest ,, this is the heritage of love that he bequeathed to both his sons Nitin Bhai Hemant Bhai and their sister ,,Whenever I met Mrs Manmohan Nitinjis mother I touched her feet and she would ask me seriously why I wore exotic clothes .. she would never let me leave the house without having something to eat ..
And so I have spent some great moments connected to Neha Arts and Zee Mad Neha with Nitinji , Mr Mukul Anand and Mr Sunil Manchanda ,, and I would call them because of their creativity genius .. Mukul Mad Anand Sunil Mad Chanda Nitin Mad Mohan..
And there office was always buzzing with actors Anil Kapoor Sab , Rishi Kapoor Sab, Kiran Kumar , Kadar Khan Shakti Kapoor sab,, Mr Tinu Anand Sab great days great times now shimmering memories on the sands of Time..
And every tear that fell from my eyes at Solanki bhais prayer meet transposed me to those beautiful days ,,,our group , Solanki Bhai , Satish Agarwal , Kaleem Khan , Nisar Bhai , Nitin Dhara ,.Mr Jagmohan , Nitish , Deepak Dinesh Gupta and several others ,, I am bad with names due to my failing memory ..
So a single picture hides a million words .. if the dam bursts they all come out fighting against the winds of Fate .
By Firoze Shakir Photographer No1 - June 07, 2015 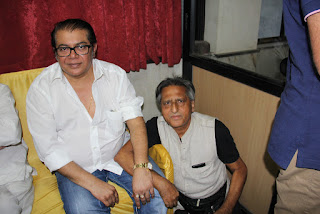 till date never found a
better boss like nitinji
who nurtured me
groomed me
polished me
poetically
cosmically
holistically
with every
holistic rub
removed all
my flaws
one of the
best boss
he was .
he helped
me go independent
my growth my success
he is the cause ,,he
stood by me during
the 93 riots he found
me homes he covered
my loss ..now in
retrospection this beggar
poet a rolling stone has
gathered a lot of moss
simply because god was
kind found me a great boss

when i was drowning
mr nitin manmohan came
into my life as a saving straw ..

pulled me out of bad lucks jaws
By Firoze Shakir Photographer No1 - June 07, 2015 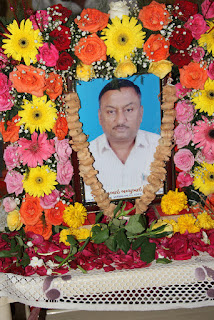 This evening I went to the prayer meeting of my very dear friend Rasik Solanki whom we called Solanki bhai , Solanki bhai left for his heavenly abode a few days back he was 55 years old and worked for producer Mr Nitin Manmohans Neha Arts banner as the chief of their accounts department , he is survived by his wife and two children.
The prayer meet was at Borivil East close to the station.. near GH School..when I reached their at 5 pm seeing his picture I wept inconsolably as Solank bhai and I had shared some great moments as I worked for Mr Nitin Manmohans fashion store Prachins at Seven Buglows for several years and Mr Solanki was in charge of our store accounts too, besides we were connected much before I joined Prachins .. I had done costumes of Mr Vinod Khanna in Insaf a Neha Arts presentation at my old workplace .
I knew Nitinji as we called Mr Nitin Manmohan and though I left his store whatever I am today I owe to him , he was the one who supported me during the 93 riots , letting my family stay in safe houses at Juhu , Juhu Scheme and Andheri Link Road .
There was a huge crowd of Solanki bhais family his relatives well wishers and his mother and sisters too.. everybody connected to SolankI Bhai was crying at this irreparable loss of a great humble human being , who was helpful to all.. he was there , if we had a problem and helped us with our tax accounts and whatever he did for us ,, it was free and with lots of love and dedication.
Mr Nitin Manmohan his wife Dolly daughter Prachi were there , Mr Nitin Thakkar his son Mitul .. all staff from Neha Arts past present and everyone that was close to Solanki Bhai was there , lost faces I had not seen for ages were there to pay their tribute to a wonderful human being.
The prayer meeting got over at 7 pm and I took the local train back to Bandra ..I shot a video lots of pictures as sweet memories I shall be posting all this at Flickr.

Email ThisBlogThis!Share to TwitterShare to FacebookShare to Pinterest
Labels: Prayer Meeting For The Departed Soul Of Mr Rasik Solanki Of Neha Arts 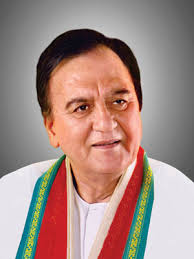