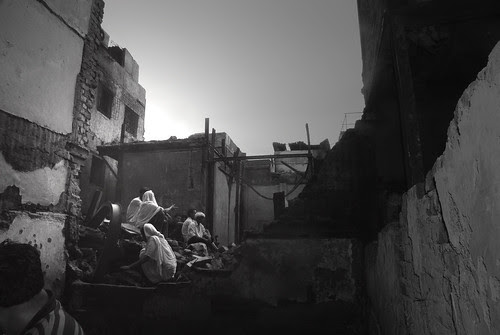 Behrampada After The Fire, originally uploaded by firoze shakir photographerno1.

I start a new set at Flickr of the after effects of the disastrous fire at Behrampada , a sprawling slum of 70000 people or more , with houses built right up to 4 floors or more mostly illegal.
On 19 June 2009 certain areas of this slum caught fire killing a child and a few adults, there are more bodies under the debris, that I shot this afternoon..this area is very congested , very narrow lanes that even after 4 days after the fire one can hardly move in..calamity has struck at a bad time as the rains has begun.

I am very close to Mr Shabbir Shaikh the local Samajwadi Corporator , he has done a lot with the locals to help the homeless and the needy..opening of relief camps , medical aid, and a common kitchen including clothes.

I normally dont shoot disasters, house crashes or floods, I would not be able to shoot pictures while people are running helter skelter for their lives as saving lives is more important than shooting a tragedy... this is my opinion I adhere to it. I am human first , a photographer later.

There was a blaze close to my new house at Bandra Reclamation , before I came here I never shot it.,.I shot the train serial bomb blast late in the night after all the bodies had been removed from the tracks and the train compartments.

After the shoot I sat at Mr Shabbir Shaikhs office at Bismillah Compound, he has not slept for couple of days, and is coordinating with political heads of various parties , the human angle cuts through all party lines ..

Mr Shaikh told me the bulldozers cant move in to remove the debris as the survey is not yet over, the residents are sitting out in the open, to mark their houses, the landlords and their tenants.
There were a lot of industrial units , ready made garments, masjid, provision stores all gutted down..

Many resident begged me to shoot them next to their gutted houses or what remained of them..it was very sad and the pain to touched me , kids looking blank into what was a comfortable home a few days back.

A lot of relief has come in , people are giving out cash to those who lost everything.. the saddest is a family of ten on one slum, a two story structure , they managed to throw their 14 year old out of the window but could not save themselves .. members of this family lie buried in the debris..

There are people living under the sky walk, or where ever they can find shelter..you will have to see my pictures and gather their story of loss..all dreams gone with the fire and the wind. 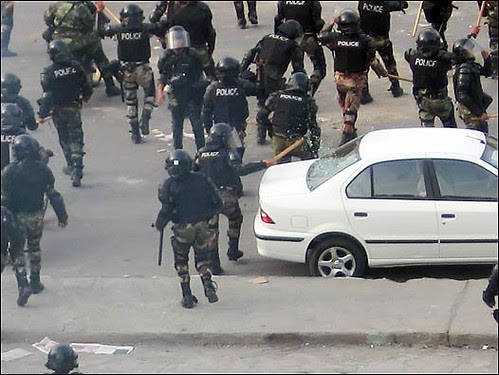 WHERE IS THEIR VOTE ? 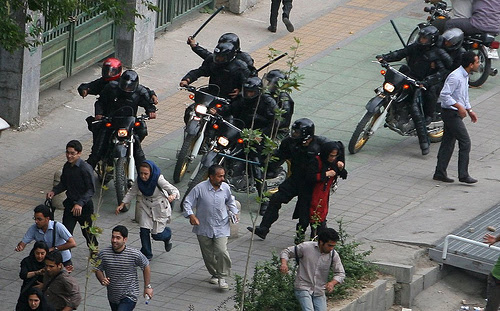 WHERE IS THEIR VOTE ?, originally uploaded by firoze shakir photographerno1.

Anthony Posey has done a commendable job posting pictures of the unrest , the chaos in Iran..It was Anthony who inspired me to create this set as a tribute to the Iranians an indomitable race .. fighting for a just cause..


People like Fred Miller, Nauman Umair all pitching in from wherever they are.

Neda Soltani - Symbol of Sacrifice To the Cause of Freedom 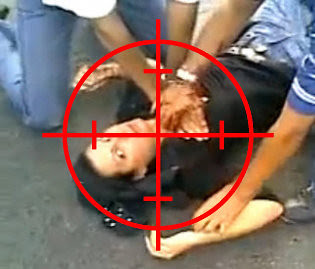 Neda Soltani - Symbol of Sacrifice To the Cause of Freedom, originally uploaded by firoze shakir photographerno1.

At last I could talk my friend in Iran who he has made the movie of Neda dying and he has sent the video to me.
I write here exactly as he told me:
.
"we were in the street and we heared that a sound like gunshot
we thought it is a firecracker
for the second time we heard it and I saw that Neda is not normal
and we ran toward her. I was is a one meter distance to her when she was shot.
my friend (the friend of my friend in Iran) is a doctor and he went to her and I took the movie
I deny any news about motor cycle Basijis, I am sure that she is shot from a roof by sniper
I deny about arresting the Basiji by the people and I have never seen some thing like that"
.
I asked him is he ready to talk with repoerters and journalists who they asked me to make them in touch with him?
He answered: "I can be in touch with them via you (me, Hamed Rad) for security reasons"
This is my latest news about this movie which is taken by my friend
Please Publish these authentic information through medias
Reverently: Hamed 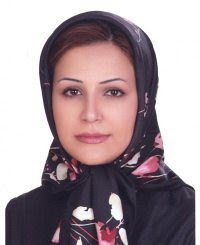 Iran's revolution has now run through a full cycle. A gruesomely captivating video of a young woman — laid out on a Tehran street after apparently being shot, blood pouring from her mouth and then across her face — swept Twitter, Facebook and other websites this weekend. The woman rapidly became a symbol of Iran's escalating crisis, from a political confrontation to far more ominous physical clashes. Some sites refer to her as "Neda," Farsi for the voice or the call. Tributes that incorporate startlingly upclose footage of her dying have started to spring up on YouTube.

Although it is not yet clear who shot "Neda" (a soldier? pro-government militant? an accidental misfiring?), her death may have changed everything. For the cycles of mourning in Shiite Islam actually provide a schedule for political combat — a way to generate or revive momentum. Shiite Muslims mourn their dead on the third, seventh and 40th days after a death, and these commemorations are a pivotal part of Iran's rich history. During the revolution, the pattern of confrontations between the shah's security forces and the revolutionaries often played out in 40-day cycles. (See pictures of terror in the streets of Tehran.)

The first clashes in January 1978 produced two deaths that were then commemorated on the 40th day in mass gatherings, which in turn produced new confrontations with security forces — and new deaths. Those deaths then generated another 40-day period of mourning, new clashes, and further deaths. The cycle continued throughout most of the year until the shah's ouster in January 1979.

The same cycle has already become an undercurrent in Iran's current crisis. The largest demonstration, on Thursday of last week, was called by opposition leader Mir Hossein Mousavi to commemorate the deaths of protesters three days after they were killed.

Shiite mourning is not simply a time to react with sadness. Particularly in times of conflict, it is also an opportunity for renewal. The commemorations for "Neda" and the others killed this weekend are still to come. And the 40th day events are usually the largest and most important.

"Neda" is already being hailed as a martyr, a second important concept in Shiism. With the reported deaths of 19 people Saturday, martyrdom also provides a potent force that could further deepen public anger at Iran's regime. (See the Top Ten Players in Iran's Power Struggle.)

The belief in martyrdom is central to modern politics as well as Shiite tradition dating back centuries in Iran. It too helped propel the 1979 revolution. It sustained Iran during the eight-year war with Iraq, when over 120,000 Iranians died in the bloodiest modern Middle East conflict. Most major Iranian cities have a Martyrs' Museum or a Martyrs' cemetery.

The first Shiite martyr was Hussein, the prophet Mohammed's grandson. He believed it was better to die fighting injustice than to live with injustice under what he believed was illegitimate rule.

In the seventh century, Hussein and a band of fewer than 100 people, including women and children, took on the mighty Umayyad dynasty in Karbala, an ancient city in Mesopotamia now in modern-day Iraq. They knew they would be massacred.

Fourteen centuries later, Hussein's tomb in Karbala is one of the two holiest Shiite shrines — and millions of Iranians still make pilgrimages there every year. Just as Christians reenact Jesus' procession bearing the cross past the fourteen stops to Calvary before his crucifixion, so too do Shiites every year reenact Hussein's martyrdom in an Islamic passion play during the holy period of Ashura.

Because of Hussein, revolt against tyranny became part of Shiite tradition. Indeed, protest and martyrdom are widely considered duties to God. And nowhere is the practice more honored than in Iran, the world's largest Shiite country.

The revolutionaries exploited the deep passion about martyrdom as well as the timetable of Shiite mourning in whipping up greater opposition to Shah Mohammed Reza Pahlavi. With the deaths of "Neda" and others, they may now find the same phenomena used against them. 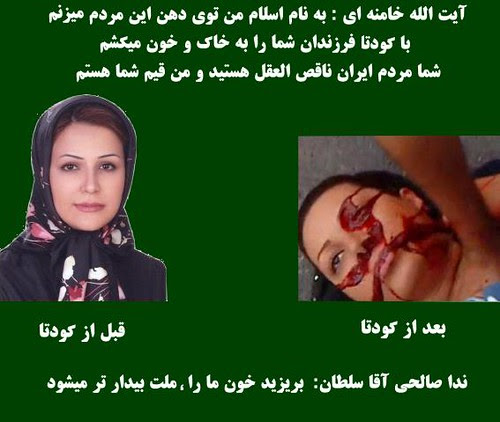 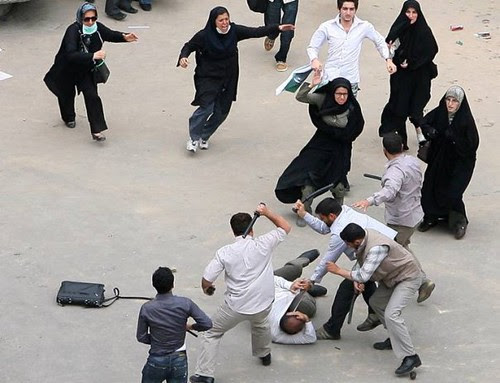 She Was , Is and Will Be Neda Soltani 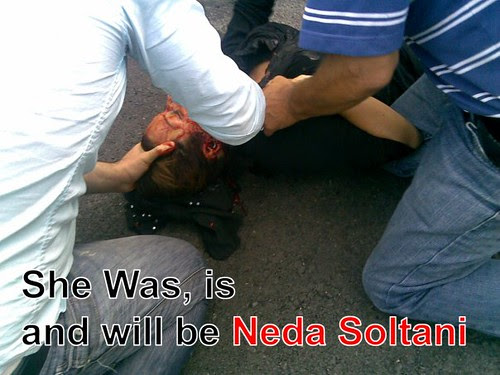 She Was , Is and Will Be Neda Soltani, originally uploaded by firoze shakir photographerno1.

shot down in the prime of her life
by an accursed basiji
she has
from a gilded cage of deceit
finally flown free
she was, is and will be
a martyred soul
neda soltani
she died
so others could live
through her destiny
a green revolution
on the soul of humanity
on facebook flickr and twitter
a message of peace
hope and harmony