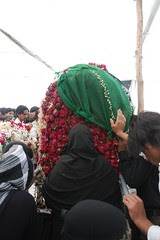 Today the Shias in India will bring two month eight days of mourning to an end ...Moharam the month celebrated as New Year by the Islamic world but the New Year of the Shias is the beginning of Ghame Hussain , memories of Hussain his Martyrdom Ashura and Karbala..

Personally Moharam never ends Majlis the memory of Hussain the matam.. never ends and this memory of pain is the universal strength of the Shia that keeps his faith alive from one generation to the next.. the black clothes stained with dried blood , the zanjir the kama and the sword will be put away in the cupboards ..to be bought out next Moharam.. and strangely when the rest of the Islamic world fasts .. during Ramzan , the Shia will once again let out a screamless cry of pain on 19 Ramzan , Shab e Zarbat and on 21 Ramzan early in the morning the matam the flagellation the blood will flow freely on the day the Shias commemorate the pain of the Martyrdom of Imam Ali father of Hussain and cousin of the Holy Prophet son in law of his daughter Princess Fatima.

And these are my thoughts as a beggar poet of India and also a Dam Madar Malang above all a Hindu Shia.. Shiasm made me Human..

I have shot Athvi in Lucknow the Chup Tazia the silent echo of painGhabrayegi Zainab.. at Nakas when the Chup Tazia begins its journey from the gates of the Shia Girls College to be buried at the Karbala of Kazmain.


I have shot Athvi at Mehmoodabad walking alongside one of Indias greatest humble Mauliees Sulaiman Bhai erstwhile Raja of Mehmoodabad , but than because of the bigotry , of a certain segment of the Shias of Lucknow I distanced myself from the city of my birth forever .. I decided took a vow never to ever visit Lucknow as long as I live.. I miss Lucknow I miss Athvi but I respect my values I hate oppression I follow the tenets of freedom set by Imam Hussain ..

I am happy that my grandchildren are part of the ethos of Lucknow through my grand father Daroga Nabban Saab descendant of poet Mir Anis..and through their mother a Lucknow born too.

Both my grandchildren are devout Shias , my grand daughter does kamzaani at the age of 4 and my grand daughter just six month old Nerjis Asif Shakir has had her back scourged with flagellating blades on Ashura , this is our form of Tabarrah.. we shed our blood for our Imam,, and I do the Tandav leaping in the air with my dagger doing the Dance of Death Durga like on the soul of Shimr..

My three month old Mumbaikar grand daughter Zaira Saif Shakir will have her back scourged today.. and I shall cry when I take those shots ..

I have shot the Athvi in Govandi a few years back but than I began shooting the Malad Malvani Athvi as I get to shoot the Kama Zani Zanjir zani for one last time ..

And finally tomorrow the Shias cerebrate the greatest Eid called Eid e Zehra 9 Rabilawal vindicating the sorrow of a mother and proud of the tears the ancestry of the Shias .. his essence his birthright .. his path his goal his destination.. A Maksade Fatima for a Maksade Hussain.. 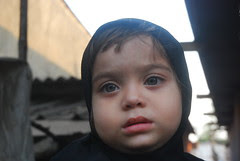 Malaika And Ghame Hussain, a photo by firoze shakir photographerno1 on Flickr. 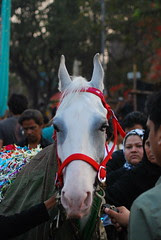 Bloggers Show You Today What Is Going To Happen Tomorrow 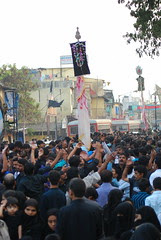 Bloggers Show You Today What Is Going To Happen Tomorrow, a photo by firoze shakir photographerno1 on Flickr.
By Firoze Shakir Photographer No1 - February 01, 2012 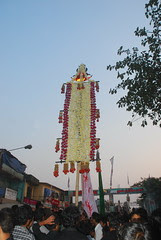 My late grandfather Daroga Nabban Saab was the descendant of poet Mir Anis one of his son Chaudhan Syed was born mute and so my grand father a writer of Marsiyas wrote this about him..

It is said my Uncle began to speak and my grandfather fulfilled his wish..

I dont know why I remember this .. 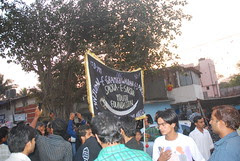 With heavy hearts, we take this opportunity to bid farewell to the Martyrs of Karbala as the Ayyam-e-Aza come to an end. We will have to wait for another year to witness and experience maajlis, matam, Ashura, Arbaeen, mourning, and azadari at this scale. As we remove the black cloth from the walls, we salute the Martyrs of Karbala and declare that we are with you, we are with you, surely we are against your enemies. We will endeavor to perform your Ziyarat, and will endeavor to shed tears in your remembrance every Thursday night. Furthermore, we will strive to apply the principles you stood for in our daily lives; the foremost of which is dedication and loyalty to the Imam of the Time (A).