I seek your forgiveness if I have hurt you unintentionally or accidentally.
Intentionally I would not hurt you unless you provoked me but still I apologize.
I seek your forgiveness for deleting all friend requests.. I cannot give you access to my timeline that is private and even if we have a common friend I still don't know you.
I seek your forgiveness if you insisted being my oldest patron on Facebook since 1955 to shoot Moharam in Mumbai and I stubbornly refused I had a problem in the past with a few Shia bigots I decided never to ever take part or shoot Moharam in Mumbai.
I also willed my body to Medicine I won't be buried in a Shia cemetery .i hope my sons and wife follow my request or I will come and haunt them after my death.
I stay away from my community I have a few Shia friends which is more than enough.
I seek your forgiveness if I blocked you your religious impositions on the way I live my life on my terms was not acceptable to me.
I seek your forgiveness for your hateful comments on my posts or ridiculing people or rituals I shoot.
I seek your forgiveness Syed Masoom Ali Baba Asqan Madari and MurshadRafiq Ali Malang I moved from your Order as I found I could not escape bigotry by your members for being a Shia.
It's catch 22 situation.. To be or not to be me.
I seek your forgiveness for any gesture or words.
This is one part of the Jain faith that touches me deeply.
I am a hobbyist photographer that shoots only India faith culture rituals.
Whichever faith I shoot I don't insult or humiliate.
I don't shoot for money or for 2 seconds fame.
So I don't understand why people take my posts personally I have not tagged them..
You want to shit please use a public toilet.
As my upbringing was different I did not live in a Ghetto did not go to a Madrsa was influence in my values by the family of Late Nawab Kashmiri I think I have come a long way.
My two daggers for the first time in several years remained unsoaked in my blood.
I have been bought up in a Church a Temple and and the Imambargah at home that moulded my character my personality.
So I also seek your forgiveness for forcing you to read all this.
Michami Dukdam.
I seek most of all forgiveness from Mr Zain Hussain a very dear friend from Hyderabad settled in Dubai who saw me walking from Najaf to Karbala in his dreams.
He insisted I walk this event he was paying for my air ticket after much introspection I politely refused I had gone through bad times a few years back I borrowed money from a friend I have to repay him so I can't go on a spiritual trip with this heavy burden.
I will do this trip once I am free of all encumberances.
With my hard earned money.
I think I also seek forgiveness from my wife my children grandchildren my brothers sisters nephews niece.
From all you friends near and far.
By Firoze Shakir Photographer No1 - September 22, 2018

With the greatest director of all times. Mr Raj Kumar Santoshi ji.. 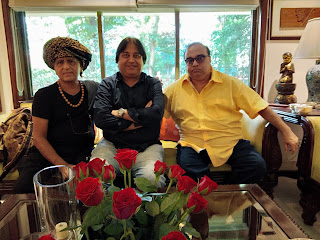 I did Ghayal Ghatak Pukar Barsat Halla Bol China Gate to name a few films directed by him.
I acted in two films also directed by him I did cameos in China Gate and Phata Poster Nikla Hero.
I normally leave Mumbai during Moharam ..I do my Moharam Ashura in Lucknow Hyderabad or Chennai but this time I could not leave because of my commitment to Mr Santoshiji as I am doing costumes of Mr Danny Denzongpa in his period film.
It was because of this film that I could not go to Ajmer or participate in Chadiyan.
So the meeting and look trial of Danny ji was in the morning with film creative director Muneesh Sappel and Rajji.
The look went of very well now I have to execute the balance dresses.
This is my toughest assignment of Dannyji after Khudagawah.. There is minute detailing hand work aging and I have to stay back to assist my workers with it.
I have come home and can't believe I waited for this look trial for almost 10 months.
Vijay Singh the production head was there too.
And I have been connected to Mr Danny Denzongpa for over 35 years I did Army Jai Ho Manikaran Baby Ram Aur Shyam.
My benchmark of inner sartorial satisfaction and success has been styling for Mr Denzongpa.
The most demanding versatile actor of Bollywood.
By Firoze Shakir Photographer No1 - September 22, 2018