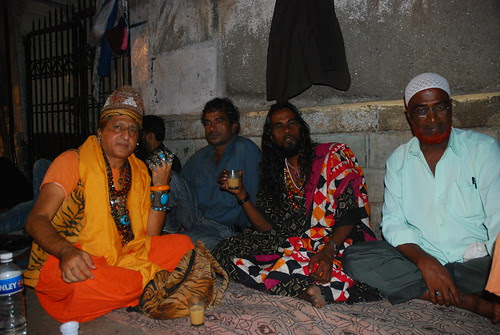 The guy with long locks is Hassan Ganda I baptized him Don Jaun Bawa when I posted his pictures at Buzznet six years back.


He was at the Dhuni but sat away from the Chancawalli Rafaees , and this was shot on 9 Dec I think, he was very happy to see me we have been old friends and he is one of the most artistic body piercer on the Urus circuit.

He is called Ganda as he usd to lift a 50 KG stone with his penis back home in Rajasthan close to Ajmer Sharif, he is now a head of dargah in the jungles close to the Gir forests , all his life he has lived with wild animals , and he is got a temperament of a Naga Sadhu as he has been living in their proximity.


While we were sitting having tea he asked me to come to the Dhuni at Ali Maulah Dargah at Dharavi, I accepted his offer and we rushed in a Murids car , not before Bawa gave the Murid some wild opium bit.

Hassan Ganda pierces both his eyeballs with two swords..and he is fast it is impossible to keep up his antics with the camera.

Unfortunately this year he was not in Fakhruddin Shah Babas Sandal procession..I missed him.

Hassan Ganda is not happy with the new murshad of the Chancawalli rafaees , the old Murshad Handi Sai was his guru and relative..his other chela Farukh Baba has been gifted a Pulsar bike so I was told he is moving about in the forest with it..Farukh Baba too was heavily into opium and hash..

As I dont smoke or do drugs I keep my mouth shut I shoot pictures , I try not to shoot the young kids pulling the chillum at the Dhuni as most of them come from good homes..

Most of the dons, business magnates prostitutes pimps hijras are the patron of the Bawas, depending on dua tawiz and exorcism too, removing the evil from a patrons relative or family.


I am absolutely comfortable with the Bawas I dress like them , I move barefeet , they know I am good with the sword I cut my head ..Hassan too is a Mauliee he calls himself Kalbe Ali meaning Dog Of Ali .

He is always reciting the Shia kalma though he is a Sunni adherent..actually Shia Sunni does not bother him at all..His kaul is Ali.

And I am in midst of a chaos as I have been invited to the Hardwar Kumbh by Naga Sadhu Guru Shri Vijay Giri Maharaj, I am in mourning for Moharam, but I wont wear orange , I will don a black loin cloth and barefeet become one with my cultural inheritance..luckily I dont need tripods , filters etc during the time I shot the Nasik Kumbh.. just a satchel my camera and my humility in a beggars bowl.. I will wander the streets of Hardwar begging from door to door with my Guru ..

I will go for the Shahi Snan and than return to Mumbai for Chelum or whatever itinerary my Guru plans. 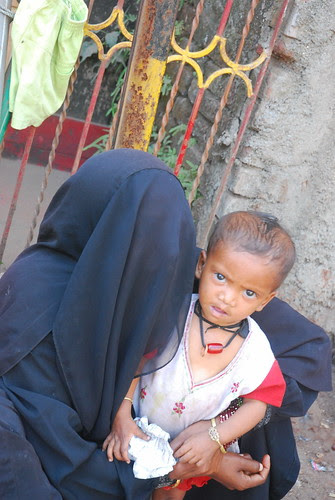 for a few coins
from your miserly pockets
she sits and waits
Muslim community
builds houses of gods
madrsas ..
she a demolished
house without gates
oh to see them begging
everyone hates
in silence her pain
of being a Muslim
destitute she narrates
while the jihad continues
killing of innocent people
in the name of Islam
wont abate
eunuch silence
just diatribe and debate
a suicide bomber
on the soul of humanity
has sealed his fate
virgins in paradise
as his soul mate
the mullah frowns
hesitates
a question mark
that time negates
another pawn
checkmate
hate only
more hate
creates

Life a One Way Lane 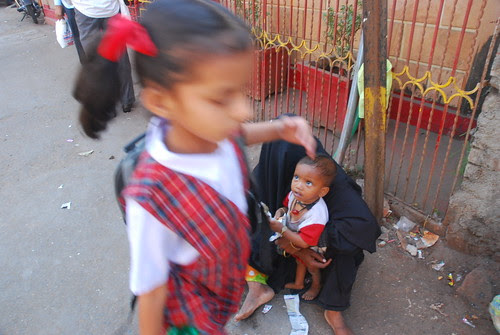 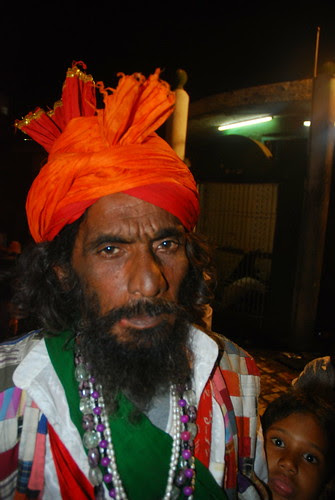 Made In India, originally uploaded by firoze shakir photographerno1.
By Firoze Shakir Photographer No1 - December 20, 2009 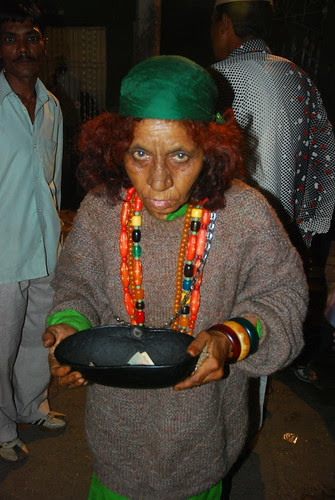 What is Woman?, originally uploaded by firoze shakir photographerno1.

What made her renounce life beg at Dargahs..she pierced my soul evading my man like curiosity..bawas have strong fields of energies pervading their mind space..they just block you period.

What is a woman ? born as a beggar bowl, if she is not begging from her parents than it is her husband , a woman is a beggars bowl that gives gives gives and yet never remains empty..and read this positively..I am not denigrating womanhood at all..

Was this bawa lady jilted , was she shown the door when her Muslim husband bought in a more beautiful, nubile doe eyed seductress ..Allah Knows..

Every woman is a fairy tale seldom having a happy ending.. and her Prince Charming well he is laid up with some other woman..for all you know.

Woman's final betrayal is always at the Hands of Man..

The Khasi and the Hijra

The Khasi and the Hijra, originally uploaded by firoze shakir photographerno1.

I tried my level best to get the castrated goat and the Hijra in the same frame , did not work..both will be slaughtered one by faith other by fucked up society.

Shamem Hijra had me impressed , all my life I have never met a hijra with her knowledge and charm, I exclude Laxmi Narayan Tripathi from this opinion as I am talking about the grass root hijra and Laxmi is far above Shamem both in intellect and in beauty.

I have a fascination for the beggar hijras , their life style their angst and their destiny.

A destiny caught running behind cars at Mumbai traffic signals. its really sad these creatures not created by a racist God..

I did not ask for Shamem Hijras mobile number , I dont ask personal questions , I shoot pictures endlessly and this is my high.. I can go on shooting Hijras , and they cross my path , be it any where , I am destined to meet Hijras on the cross roads of my life.

No Hijra came to my house for Marziyas birth.. I was in town two days back, a part of me wanted to go to Peela House the Mumbai cages to meet my Hijra hybrid Heena but I let it pass...and perhaps Heena will search Sahara Samay for my Ashura picture of cutting my head this year, but I wont be in Mumbai..no Tandav on the soul of Shimr ,he gets a reprieve this time.

I have shot Mumbai Moharam without a break I need to change the back drop of my Moharam pictures this year.

My friend Dr Reza Masoudi from UK will be shooting Ashura in Mumbai he has already shot Ashura in Lucknow last year. 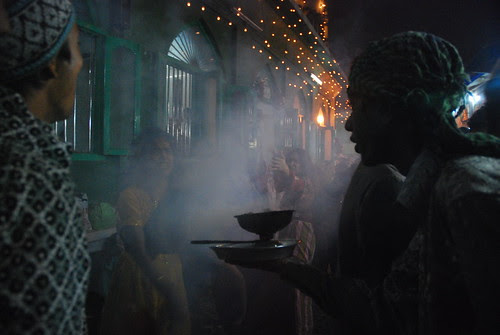 I was leaving the Dhuni , but almost turned back as I saw this heart crunching mind boggling scene, the effect of loban smoke on the possessed women at the Mahim Dargah.

I dared to shoot this frame after frame without stopping and all this was shot at the Urus of Makhdoom Shah Baba.


I cannot tell you the pain ,the agony I personally felt shooting these pictures, and this was the ultimate pain deprivation of their senses , their frenzy , their continuously shaking of their heads , their grunts and groans.

The loban blowers went about their jobs clinically and the cops were standing a feet away from me mesmerized too, I shoot pain, and pain is the only human factor that joins us all beyond caste color or creed..pain is the only element that makes us all human irrespective of our wealth or our poor state in life.

After shooting human pain on the streets , how can I shoot insects , sunsets mountains or the flight of flamingos...yes pain has ensnared me and my camera eye..tears streaming down cheeks , the chant of Ya Hussain , blood gore I will shoot in the coming weeks..and become one with human pain.

Shooting a crystal drop of a tear suspended motionlessly on the soul of humanity is the genre of my photography, and nothing will ever change it.


If you go to Kazmain in Lucknow during the last segment of Moharam called Athvi , you will see a unique moment of adult men crying like little children , crying for the Imam as he goes back to Karbala from a homeland he liked the most Hindustan..

Imam Hussain did not want war between Muslims , most of the tribes were inter related he wanted Peace and Yazid wanted absolute Power , Imam Hussain could have opted for any land for refuge but he wanted to settle down in Hindustan the land of Hospitality the land of Peace and Prosperity..

As an Indian Muslim born and bought up in India my metaphor for survival is based on the love of Hindustan and my love for Imam Hussain the paragon of Peace and Humanity.


I remember a Muslim lady Zuleikha at Khatus workshop at Lalbagh who hosts Durga Ma at Vakola since 36 years ..she asked me whether by doing what she does , does she become a Hindu..I answered her you become better than a Muslim baiting Hindu, why must one prove ones nationality by only reciting Vande Matram , we give our lives for our country is that not enough in the lexicon of love of a nation that has made us what we are..

Now for Gods sake dont ever ask me what is photo blogging ..it is adding thought where no text existed.. from Mahim Dargah I transport your mind into the soul of peace loving photo blog.. Now you know why I cant shoot Idd hugging pictures , now you know why I shoot hijras, Naga Sadhus Rafaees and the Shias and the cheek piercers of the Maryamma sect..

I will pierce my cheeks with an 18 feet rod next year , and walk from Mahim beach to the Maryamma Temple at Fishermans Colony, just tell will this act make me a Hindu or a heretic by Shia baiting Muslims of the Wahabbi sect. 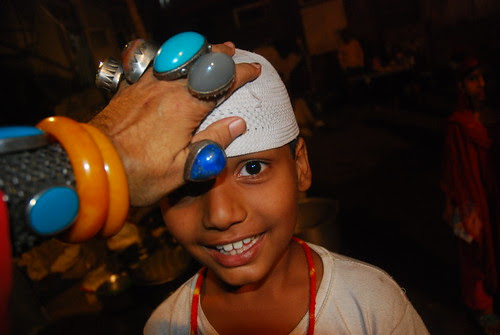 Altaf Siddi from Mumbai and Me 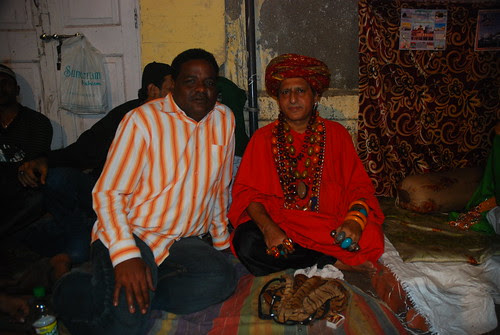 Altaf Siddi from Mumbai and Me, originally uploaded by firoze shakir photographerno1.

All this was shot a few weeks back at the Makhdoom Shah Baba Dhuni, because of a slow Internet connection , I have not been able to upload my stuff at Flickr where all my blogs originate.

Altaf Siddi works as a junior artiste for Bollywood films , his uncle was famous fight master he told me.

He was happy that I was documenting the Siddis of Junagadh..Altaf has been a great help perhaps I will meet him at Haji Malang next year at Urus time.

I have not uploaded a single picture at Flickr today, and I have a 5 GB card that I want finish before I add my new Moharam set to Flickr..

I wont be shooting Moharam in Mumbai this year, I plan to go elsewhere for a change..Mumbai will miss my Tandav on the streets of JJ Junction..

I wont carry my dagger or my flagellating blades for security reasons I will use the one all others use at the venue..

I have asked a friend do get me a Japanese Samurai sword to cut my back..

Due to the injury to my right hand completely useless I have trouble wielding large handles but manage when the time comes.

I am anxiously waiting for my American friend Dr Glenn Losack MD to hit the dusty Mumbai trail.. he should be here in Jan end hopefully all my friends are keen on meeting him.. Habib Nasser and guys near Moghul Masjid kept inquiring about him..this white man friend of the Mumbai Shias...