Reminiscing The Ujjain Kumbh Mela Through The Eyes Of The Lens 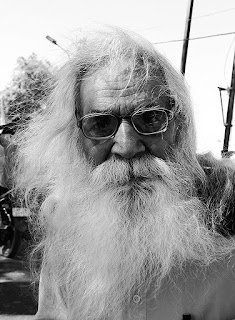 There is a huge unexplored canvas waiting to be shot at the Kumbh Mela ,,and though I hardly moved out from my Akhara where I lived with the Nagas of the Juna Akhara and my Naga Guru Shri Vijay Giri Maharaj,,,
I shot extensively mostly portraits of Naga Sadhus ,, the naked Naga Babas on Bhuki Mata Road ,.and we had a large exotic group of Naga Babas ..there was Ghantiwale Baba a bell dangled from his flaccid penis .. you dangled the bell to take the blessings of the Baba ,,, you paid him for his blessings and there was a huge crowd of men women mostly kids dangling the bell of Hope .
There was another Bollywood Naga Baba with sexy dark glares every time I shot him I had to offer him from my depleting money pouch..
My favorite was the Naga Baba on the swing he took an instant liking to me ,,though he was not aware I was a camouflaged Muslim in the garbs of a Sadhu he thought I was a NRI Sadhu.. but could never understand why I gave him Indian currency instead of crispy dollar bills ,,,he would call me up on the mound where he hung from a swing on a tree ,,, give me ash. and than called me closer and put one of his legs on my shoulders ,,this was his yogic blessing to me ,,and he loved being shot by me ,,,he asked me my name I told him Ashok Bhartiya the name given to me by my Naga Guru.. to save my ass if I ever got caught as a Behrupiya...
I already told you about the Naga Sadhu near Dutta Akhara who chased me with a stick but could not catch me ,, I wanted to tell him to learn tennis under Coach Surendra Pawar ,,,I was so fast that even the foreigner began shooting our chase .
Well back to photography ,,there is a lot of people photography near the bazar ,, common people sadhu foreigners beggars ,,and early mornings on the banks of the Shipra when groups of Sadhus from various Akharas come to bathe ,, here you get some great portraits too.
The other place are the tea stalls for Kumbh gossip and Sadhu faces gulping tea ,, or cold water .
As I was part of the procession with my Naga Guru during the Shahi Snan I shot from within.. and a lot of Naga Sadhus at the Naga stronghold called Tanni.
I just got a call from Gurus man disciple Mahesh Bhardwaj.. he participated in both the Shahi Snans and has gone home to Hardwar ,,he will return for the third last final Shahi Snan 21 May ..he was hoping I come too...I told him I will try ,,,
I am unable to get in touch with my Naga Guru in Ujjain.. but I remember my sojourn at the Kumbh fondly ,,,
The Kumbh Mela is the best place to hone your skills and unlearn photography ,,
By Firoze Shakir Photographer No1 - May 12, 2016