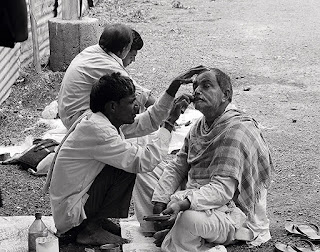 Email ThisBlogThis!Share to TwitterShare to FacebookShare to Pinterest
Labels: A Day In The Life Of A Street Barber At Kumbh Mela - Nasikh 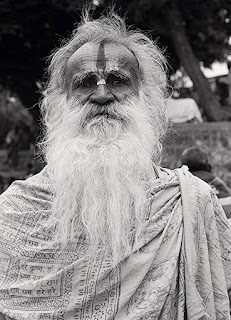 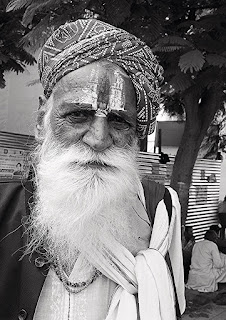 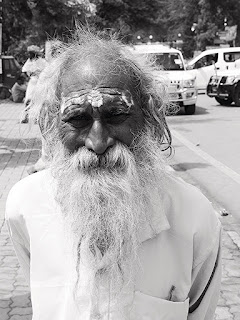 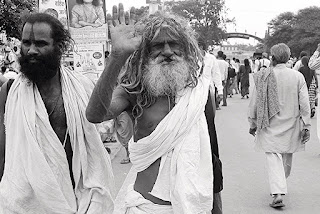 Ever since I can remember I have had no issue with a persons religion at all I hardly had Muslim friends as we were totally isolated living at Wodehouse Road for about 10 years , here it was Rayo a Parsi Vimal a Buddhist and Keith Kanga the sole Jehovah Witness ..
Once we shifted to Strand it was Dennis a Catholic ,Hassan Jamadar who expired at an early age a Muslim... and the rest of my friends from the Mulchandani clan all Hindus ,, and my entire school life was with Ramesh Mulchandani Strand Hotel.. Bharat Sundar Pradip all Mulchandanis ,, going to the Cheti Chand na Mela .. going to the Hanuman Mandir standing in a corner as my friends prayed for their results and I am sure they prayed for me too as I always came first in class at Holy Name High School.
Later as adults we moved out to a wider periphery ,,came the riots 93 ..and the entire city was polarized ,,it was perhaps very late early 90 I made Shia friends and giving up alcohol taking up the camera I began to document my Faith along with other religiosity .
In 2003 I was introduced to Sufism I documented the Rafaees and than made my first trip to Ajmer Sharif in 2005 and met Peersab Fakhru Miya Hujra no 6 ,, he became an important teacher and my guide and it was in 2003 I met Shree Vijay Giri Maharaj Naga Sadhu Juna Akhara while shooting Kumbh Mela 2003 and he became a Guru too.. through him I shot the Maha Kumbh Mela 2013 and the Nasikh Kumbh 2015 .
In Bandra I was very close to the Catholics Darryl Fabian Clarence Gomes Merck Desilva Fr Jaun Fr Lawrie ,,, so it was a rich tapestry all wires connecting to a single mother board .
I have had Hindu bosses I think this is what saved me I doubt a typical Muslim boss would have understood my restless soul and my love for Freedom I had good Hindu bosses Mr Arjun Daswani Charagh Din , Mr Andre Kapoor Mrs Munni Gupta Burlingtons Taj , Mr Kishore Bajaj Badasab Bandra , Mr Nitin Manmohan Prachins ,, and finally I sought redemption becoming my own boss .. there was a stint at Muscat with Dr Hamed Al Riyami Tecodev and Hon Mohomed Moosa Undersecretary of Finance Al Anwar from 1980 to 1982 ,, never went back to the Gulf ever ,, I think there is more money in India than anywhere in the Gulf if you have the honest skill to tap it.
The most important influence in my life has been Mrs Punam Sinha and Mr Shatrughan Sinha ,,the first thing I did on reaching the Kumbh Mela Trimbakeshwar sent her a message this hardcore Bhakt of Shiva .. who has visited all the 12 Jyotlings.
I promote Hinduism as Hope and Hindutva a Message of Universal Peace over 66000 Hindu blogs ,,part of my cultural inheritance ,. I became a Malang in 2011 under Syed Masoomi Baba .Asqan Madari.. so I began promoting peace and humanity and Sufism.
But whatever issues about the meat ban during Prayushan totally politicized by vested interests and the Jain community leaders keeping quiet ,, till that time the placing of the Meat Toran on a Jain Daresar was the last straw , I mean it not only hurts the Jains but our secular sentiments too.. and those guyss posing outside the Daresar need to be booked .. this is not the spirit of Mumbai this is hooliganism goondaism and is this why Rakesh Maria was shunted to give such elements a free hand beats me .. this is not the Hinduism I respect revere and promote ,, and where is law and order and progress and development I am addressing this to our erstwhile dynamic CM Mr Dev Fadnavisji..
I am hurt as much as the Jains tomorrow some issue will they place a Pork.. Toran outside a Muslim Mosque or Shrine..is what I want to know,..
I have recently come back from the Kumbh Mela Trimbakeshwar Ramkund and my 3500 blogs in the Nasikh series dont touch on this ill-will or humiliation and million light years away from the 93 riots when we lost everything at Khar Danda .
The Jains are Indians .. and certainly not terrorists to deserve such a treatment at all This is not progress or development nor is this Sab Ka Sath Sab Ka Vikas ,, as preached by our visionary PM Mr Narendra Modiji..
Discipline is the means of achieving liberation.
As gold does not cease to be gold even if it is heated in the fire; an enlightened man does not cease to be enlightened on being tortured by the effect of karma. Lord Mahaveera
By Firoze Shakir Photographer No1 - September 14, 2015