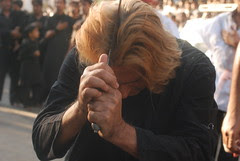 This is Ashura.
10th day of Imam Hussain Martyrdom celebrated mournfully on the weeping streets of Mumbai.
The last few days that I was shooting Kaisar Bagh or the 9 th of Moharam Juloos I would get charged an animalistic fiery urge to grab the dagger from the guys hand whom I was shooting and cut my own head,but I kept myself in control, not allowing my Shia emotions to get the better of me as an amateur photographer who shoots nurtured cultivated Shia pain.Yes I am a Shia photo blogger when I shoot images of my faith per se.
I was shooting the Ashura Juloos of Anjumam e Hyderi and Habib Nasser had presented his friends and members of his Anjuman doing the Iraqi Dagger Matam, a slow choreography of bleeding Faith..
The guys synchronised the cutting of their heads , dressed in white aprons that represented shrouds..and this plea of human passion began at JJ Hospital junction and continued till the Rehmatabad Shia cemetery, a long distance on foot..
I requested Habib Nasser for the dagger , and handing him my camera began my Kama Mata, the first of this Moharam.
Habib Nasser has shot these pictures , he is a dynamic and prolific photographer himself.
I will in the next picture explain to you the feelings and the emotions while cutting your forehead . 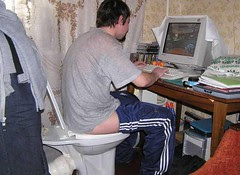 This picture was sent to me just now by my photographer digital genius Atul Choubay..
Its about a game addict.. 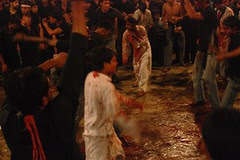 MOHARRAM “THE WAR AGAINST TERROR” 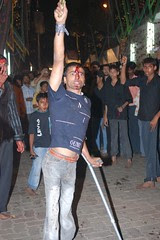 Babus story is tragic, of pain and human calamity , and unpredictable path of human destiny.
Babu had polio on one of his legs and moved about on crutches reciting Noha and taking his Anjuman based at Moghl Masjid to different parts of the suburbs of Mumbai..
The Shabbedari of his Anjuman takes place at Moghul Masjid..
Being an invalid never stopped Babu from Shia traditions, I have a lot of love and respect for him,the moment he sees me he lights up..
Not very long ago his other good leg was smashed in an accident at Lucknow, I came to know of it I rushed to Habib Hospital, he was in tears when he saw me, and begn to cry saying he must have hurt someone that he is being punished and took this with stoic faith in the Imam..
Babu is human quality, kindness, that you rarely see these days, Babu lives with the dignity of his affliction..Not just me others love Babu more intensely, he is the mascot of our pride in our Shiasm, because it will take him time to reach the entire distance of Amin Imambada from Mohgul Masjid I saw one of his friends lift him up and cradling him with care dropped him at Amin Imambada..
Yes this is Shia bonding , layers and layers of lessons to be learnt..
Babu does not know I am writing this story about him, I am not witing a story of Babu , but yes I am crying as Babu is writiing the story of my Faith..
Crying is a very poetic human emotion, we all laugh and consider laughter a medicine , but crying is holistic healing , we Shias were born to cry for Imam Hussain..
This is our pledge that we call Maksade Fatima for a Maksade Hussain..
Tears from the pitchers of our eyes like the running waters of Euphrates flowing from the leather pouch of Hope called Mashke Sakina - and not far away you will notice Abbas Alamdar with his hands chopped , lying on the beachy shores ...away from the trials and tribulations that the women folk of Imam Hussain will face at the court of Yazid, shamed , snatched ridas and chadars, all from the first family of the Holy Prophet mocked taunted and ridiculed by the Yazidi hordes.
This is a black chapter of a misguided shame filled moments of Islam under Yazid.
Yes Shiasm is a emotional display based on humanity kept alive after death by a single sacrfice of Imam Hussain..
To understand Shiasm you need to be human -throw away your blinkers read the message beneath our blood that we shed year after year.. 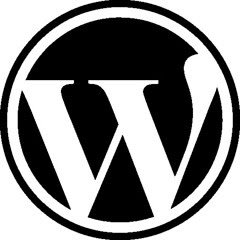 Free Space to Three Gigabytes
Much of the work we do at Automattic is behind the scenes, infrastructure you’ll (hopefully) never notice or see, but we’re always thinking about how the improvements we make to the foundation of the site will allow us to build more interesting things on top of it.
Today, one of those developments comes to fruition — everyone’s free upload space has been increased 60x from 50mb to 3,000mb. To get the same amount of space at our nearest competitor, Typepad, you’d pay at least $300 a year. Blogger only gives you 1GB. We’re doing the same thing for free.
Our hope is that much in the same way Gmail transformed the way people think about email, we’ll give people the freedom to blog rich media without having to worry about how many kilobytes are left in their upload space.
How are we able to do this? Over the past year we’ve developed our file infrastructure, replication, backup, caching, and S3-backed storage to the point where we don’t feel like we need to artificially limit what you folks are able to upload just to keep up with growth. We’re ready for you.
What about the space upgrades? They’re still important. You still need a space upgrade to upload certain file types, like movies, and we’re also increasing the limits of the paid upgrades, so if you bought a 1GB upgrade before it now adds 5GB for no additional charge.
Posted: Monday, January 21st, 2008 at 8:56 am
Filed under: Milestone, New Features.

Thank you WordPress Whizz Kids
You guys are the top of the line.. you are the coming future of photo blogging..I wish you best wishes and more success..
had you doled this earlier I might have not migrated to Flickr..
But I cross blog to Word Press from there ..Thank you Matt and Mark,, 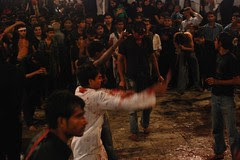 I want my pictures on this segment 9 th Moharam in Mumbai, to speak for themselves, so I have shut my radio, besides I take you the non Shias on a photo journalist pictorial journey..a journey even you as good photographers of this genre wont be able to shoot , as these are private places and private Shia moments covering the pain of Hazrat Imam Hussain, that their forefathers kept alive for over 1400 years, this new generation more educated, more knowledgeable, more net savvy, more introspective, more in command of themselves are in the forefront depicting their traditions of self inflicted pain..this is not a chillum smoke , nor a trance.
The blood is real the pain is real.
I earlier posted my pictures at Word Press and it was a site that gave me my creditibility as a serious photoblogger.
I could not afford uploads , so I posted the pictures at my photographerno1 homesite copied the URL at WordPress all of last year.
Till I rediscovered Flickr , unlimited posting at a price that was affordable, so I discontinued posting at my homesite as I had to pay for upload space .
All my Moharam pictures are at Flickr.
Selected posts I cross blog from here to my Shia site ...
shah-ast-hussain.com
photographerno1.wordpress.com
photographerno1.blogspot.com
firozeshakir.blogspot.com
and my Kumbh Mela site
firozekumbhmela.blogspot.com for Naga Sadhu related stuff..I still have CD s unposted and no time..

All this would have not been possible without the help and encouragement of my eldest son Asif Shakir ..
he got me my latest poetry publishing site..though I first blog my poems at Flickr

www.firozeshakir.com
Moharam as a photo capturing event means a lot to me, last year after an attack on me by vested Shia Wahabbi youth I had decided not to shoot Moharam, so went to Delhi to shoot the Arbaeen or Chehlum..where I cut my tendon wth a sword while cutting my forehaed that put me out of circulation, I type with the index finger of my injured hand, I cannot do flagellation , as I have a frozen shoulder on the same side of the injured hand.
I cut my forehead on Ashura day this year, on the roads, and it was luckily that the guys snatched the dagger from my hand I am a severe diabetic and the bleeding takes time to stop..
I also did not cut myself at Kaiser Bagh as I wanted to shoot pictures that I share with you..
Even this Moharam for a split second I thought I would go to Hyderabad again and capture Moharam, but business committment made me stay put in Mumbai..I also thought perhaps Dr Glenn Losack MD from America might just come to Mumbai at the last minute to shoot Ashura.. He did not come .
I had a comment from a Shia person on my Flickr post that she does not think it is right for the Shia children cutting themselves up..
Normally I would delete such a comment, but I did answer it in humility..
I have been shooting Moharam for about 6 years , kids doing Matam fascinates me , because my dad late Mohomed Shakir kept me away from all this blood letting, he could not stand bleeding , though he watched it from the Imamiya Sabil where he was a founder member , the sabil belonging to his maternal uncle..Late Maqbool Bhai..a staunch Shia from Lucknow a philanthropist and soldier of the Imam.. working for rehabilitation of the poor in the shia communty..

I did zanjir matam in my teens and than when Alcohol came into my life I gave up going to Moharam events for about 17 years, its just recently after I gave up , that my doctor suggested I take up a hobby that would make me forget my alcoholic cravings , I took up photography a crazy mans expensive hobby film era , met Habib Nasser and Baqar Nasser and returned as a born again Shia...via photography.
Started seeing events had never seen before Athvi in Lucknow,Athvi in Mehmoodabad,
Moharam in Kolkatta, Hyderabad, Hussain Tekri Jaorah..
In retrospection I think Mumbai is the best clean clear cut Azadari with no untoward controversies, no Shia Sunni clashes, just Game Hussain as the core pivotal subject.
Well about kids doing the flagellations and forehead cutting, its a tradition and will never go, no kid is coaxed once he grows up, the little kids in arms that have their heads touched by the sharp blade of the dagger with a gash very tiny one is a Mannat thing..and the parents prerogative..a baptism by blood..
I have been shooting kids, I have captured a kid pictures I will post later, at Kaiser Bagh he made several attEmpts with a dagger of all sizes but his head would not cut..
and he came back again and again and Munna Bhai in charge of the Kamazani never coaxed or humiliated him,letting him have hs chance..
Kids are the backbone of the Shia community..I know mothers who are protective about kids but come Moharam they know the child is under the Spiritual Insurance policy of Akka Maulah Hussain..
My children Asif And Saif also do not partake and I have never told them to do it.. they are much better as Shia than me..