This Happens Only In Bandra .. 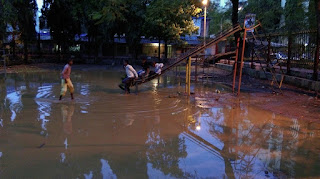 @poonam_mahajan @ShelarAshish @PriyaDutt_INC Our Congress Corporator Does Not Know
By Firoze Shakir Photographer No1 - June 17, 2015

Email ThisBlogThis!Share to TwitterShare to FacebookShare to Pinterest
Labels: This Happens Only In Bandra ..

Half Awake Half A Sleep 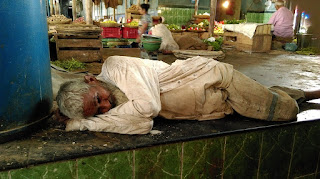 He is the North Indian migrant .. a Muslim man who does odd jobs , crushing bread all night to make batter and sells it to the filthy rich caterers of Bandra. He is in  very bad shape , his health is failing , and he tells me he will die soon.. I give him money but that cannot strengthen his will to live ,,His will to live is already leaving his flesh.
He walks from Bandra to Mahim Fort to bathe and wash his dirty clothes every morning.
And he sleeps here on this platform near the Bandra Bazar Beef Market ,, Is he ready for Ramzan.. I dont know ,.

A few weeks back I gave him money I told him to get himself checked at Bhabha Municipal Hospital.. will the caterers who slave drove him help him.. no .. caterers only help themselves .. and sadly he is a migrant like them from their hometown he was married twice both his wives passed away due to terminal sickness , he married one after the first one passed away , he has no offspring no next of kin.

When he dies the Municipality will dump him as another failed statistic ,, a dreamer who lost out ,, he is worse than abandoned cattle ,, they will soon be getting shelter and holistic attention from our Government ,, people like him are dregs .. the Uttar Pradesh government hardly bothers as it sees the exodus ,, farmers jobless people  running to Mumbai other metro cities , while they spin yarns and build castles in Saifai.

In Mumbai only the lucky succeeds ,, without luck hard work .. you could be dying and nobody will know it , he watched me as I took several shots .. he thinks I am a crazy man shooting his pictures as futile exercise ..I shoot street stories .. I try to touch you with these stories ,.. no hidden agenda ..

Mind you he does not BEG ... at all, he works every night and than crashes dog tired and frustrated even sleep deserts him..

Mumbai is a heartless city ,,  if you were dying on the road even the Mumbai cop will slither away simply because in Mumbai people have hearts minds souls eyes but no COMPASSION,, Having lived 60 years in Mumbai having seen life much before I began shooting it ,, Photography for me is only a means to show you what you will never see .. this is my backyard of urban rich Mumbai of Bandra ..towers rising high, slums rising high and the soul of the poor man falling falling deep into a open gutter of cosmic despair ,, I am not a writer but I stitch words ,, patch them on stilted legs to bring you home ,, to a decaying dying reality

Email ThisBlogThis!Share to TwitterShare to FacebookShare to Pinterest
Labels: Half Awake Half A Sleep
Newer Posts Older Posts Home
Subscribe to: Posts (Atom)