This is the Cry of the Unborn Shia Child ,
oppression and tyranny that the Shia is against and fights Yazidiyat tooth and nail...
A note that no other thought can derail
no we nor our coming posterity
will ever forget on lifes mission
as we sail
Hussainiyat is our Holy Grail
YAZIDIYAT .COM
We shall overcome
We are already on its trail
Allah ho Akbar
Cybernetic hate
on E mail

This is the Cry of a Shia Soul..
Life is incomplete without Hussainiyay..
Yes Hussainiyat is our Nativity and her ancestral birthright .
It is Ashura and Karbala combined- The Legacy of Hussain..

This is dedicated to the oft-unremembered successor of Imam Hussain (a.s), the one who though hidden from the eyes, is ever in the thoughts… Imam Mahdi (May […] 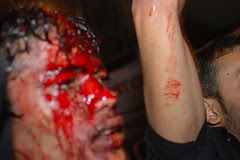 Mohsin Hallori was my ex -staffer , a good looking lad, a Shia devout.He left me to dabble in real estate..
Mohsin belongs to Anjuman Sadka e Sakina .
I have yet to see the kind of Kama Zani he does.His forehead is mark of Faith .
His younger brother to is intense but not yet as Mohsin Hallori.
He visits my shop and I know that Mohsin is a very focussed Shia an asset to our community -He is one Hallori and the other my friend Cassim Hallori... 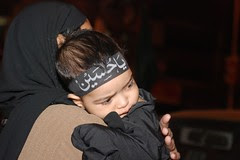 This morning I left my house in Bandra at 9.30 am to shoot Ashura at Bhendi Bazar..
On the way I saw the runners of the Standard Chartered Marathon moving towards
Bandra Reclamation..but I took a left turn towards Mahim Matunga which is not the Marathon Route and reached Amin Imambada .
The most important segment of Mooharam Ashura is played out here by the migrant Iranians,..this is like a passion play depictin the scenes of the Battle of Karbala, Shimr the Commander of Yazidi forces of the Ummayad Caliphate is played by an Iranian all dressed in red..
Than another Iranian plays Imam Hussain, saddled on a horse, how Shimr mistreats him , and how he mistreats the children of Imam Hussains family presumably Ali Asghar the 6 month child of Imam Hussain..
As soon as the this starts the Iranian drums begin to play the scourgings and the kama matam start..
For the first time in my life I shot this from below because of my injured hand..
There was a guy from Malad Malwani who had just made flagellating blades 3 on a chain widht 3" and length 24" this was a great shoot..
I shot Shimr and the few sequences.
Than outside the quadrangle was another scene my friend Habib Nassar scourged with vicious blades totaly cut up ,than the famous sword of Babula tank came out, the Iranian drums began to play and Habib slashed his back that he does each Ahura at Amins..this time he took 200 stitches.
The Juloos ends and the Iranians break the Ashura fast by eating Khichda that I too had with my Iranian friends Mr Mohomed Reza of Colaba and Prof Hussaini of Lucky hotel.The Mumbai Iranians are the finest people loving , friendly but if you rub them the wrong way God save you from their hot headed Iranian Wrath..
I shot over 320 pictures and thanks to videographer Imran had them downloaded on a CD at his office at Pydhonie.. It took about an hour and from Pydhonie I walked to Zainabia where Maulana Bilgramis majlis was going on , as it ends the next segment of Ashura starts the impressive juloos fro Yaqoob Gully to JJ Hospirtal junction and from there to the Shia cemetery for the Majlis by Maulana Athar Saab,this is the last Ashura Majlis called Shame Ghariba..
The Juloos had Habib Nassars Anjuman Zulfiqare Hyderi doing the Iraqi kama
matam non stop, with Baqar Nassar , Ghulam, Kalu and a Bohri friend of Baqar Murtuza who was bleeding profusedly ..
I had not scourged or cut my forehead upto now becuse of my equipment , here I gave my camera to Habib took a daggar and cut my forehead too..
Habib pulled the dagger away from my hand as he did not want me to do hard core matam because of my diabetes..
From here I entered the Rehmatabad Shia cemetery met Maulana Athar Saab his son Maulana Yasoob..
The Shame Ghariba started , lots of crying wailing and before the Majlis could end the hardcore Kama and Zanjir matam began I shot this being careful not to get hit I hot over 500 pictures of the Juloos and the Matam inside ..I will dowload tomorrow I am tired and exhausted..
I took a cab and thanks to the political rally of Mr Narendra Modi there was total traffic mess I had tod ivert the cab via Dharavi 90ft road it took me two hours to reach home..
So ends Ashura.. in Mumbai..
I shall complete the 9th Moharam series and than show you my Ashura pictures..
My Nikon D70 again went dead on me I had just had it repaired at Subhash Solanki so I shot the pictures on Nikon D80..
7 and 8 Moharam pictures of Kaiser Bagh are on hold...