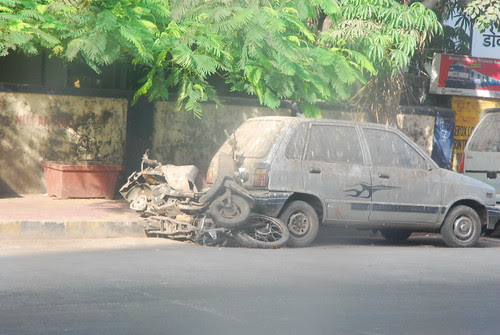 Day In And Day Out I See This On Bandra Hill Road, originally uploaded by firoze shakir photographerno1.

This is a street scene bang opposite the Bandra Police Station each time I pass by it vies for my camera attention I am wiser as this scene makes me visualize life in all its morbidity.

It makes me see lifes wear and tear , I can give sexual connotations to this scene akin to a street rape only thing that bothers me is whether the Lambretta is humping the bullet , or are they both sadistically sodomizing the Maruti..

I leave it to your imagination it surely cant be as fucked as mine.

And all three victims of Fate , travesty of street justice wait to reach the other side of Bhangar shop once the court case in which they were involved gets its hearing..maybe another 15 years away..

So at the moment they lie in a Police cemetery on the streets of Bandra Hill Road..

Who cares a shit , only a street poet who reads the Drama of life through the viewfinder of his camera. 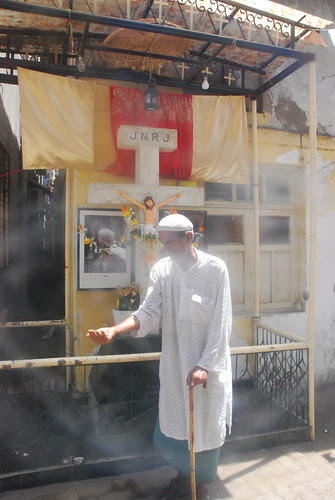 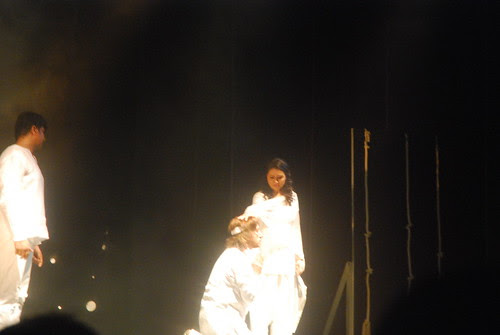 Views on my Flickr photos yesterday was all time high 18863..Thanks to all of you.. 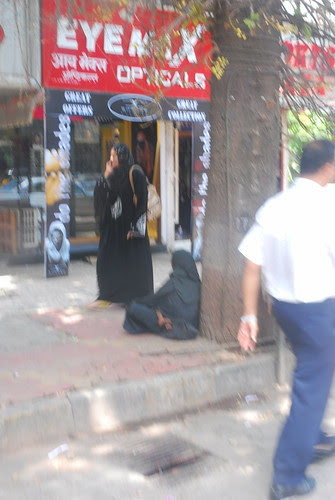 Iain Carrol
Did you ask for permission to take the poor ladies picture? and if you did I hope you paid her handsomely..

Firoze Shakir
Thank you I dont take permission at all pain has no time for such obsequiousness, I paid her handsomely not just money but a picture and poetry too, I was actually posting this to wake up somnolent Muslim conscience sorry I woke you up instead ..thanks for the comment..Ian ..

You should visit India one day..a land of prose and poetry.. and moving pictures of pain..

I Shoot What You Wont Shoot 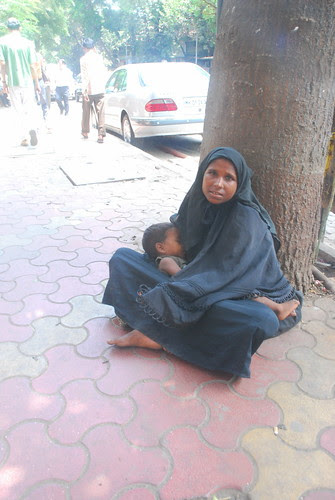 I Shoot What You Wont Shoot, originally uploaded by firoze shakir photographerno1.

i captured pain
i shoot what
you wont shoot

I Shoot What You Wont Shoot

I Shoot What You Wont Shoot, originally uploaded by firoze shakir photographerno1.

i captured pain
i shoot what
you wont shoot

Silhouette of the Hijab 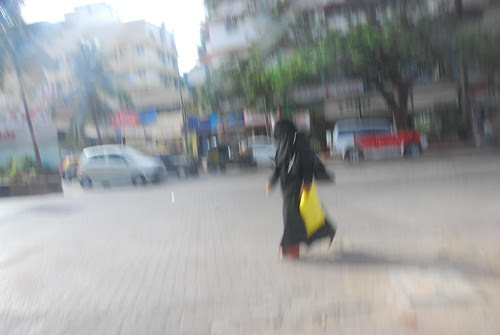 Silhouette of the Hijab, originally uploaded by firoze shakir photographerno1.

Silhouette of the Hijab 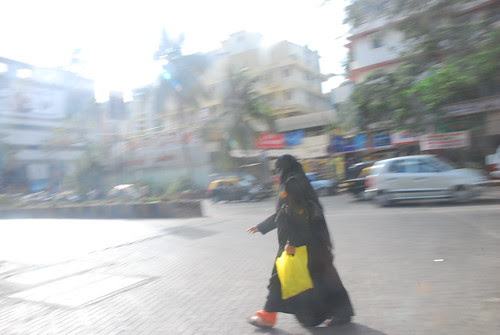 Silhouette of the Hijab, originally uploaded by firoze shakir photographerno1.

I am a pro hijab poet and when I am not in a mood conjuring words to poetize the pain of living I shoot the streets , and the streets of Bandra , a reservoir for parched minds of street photographers.

I shoot what you wont bother to shoot I shoot time running in haste I shoot anything that triggers my mind and it also takes guts to shoot what I shoot.

I have moved away from my usual slum landscape, now I shoot Bandra Hill Road..

I have stopped going to the Bazar or the fish market as I now cut across a lane into pristine gaothan surroundings of a tiny alcove called Mathilda chawl...an East Indian community ..which is almost vanishing in thin air.

Bandra is the heart and soul of the suburbs and now you know why it is called the Queen of the Suburbs.

This lot that I have posted at my Flickr photostream is what I shot before the Maryamma Feast Sion Koliwada ..I uploaded all this today.

I am very happy with MTNL Triband as my Internet provider I have moved a million miles away from an Unknown Zone called You Telecom.

And most of the staff in his office at St Martins Road think I am a famous astrologer , so I get good treatment.

Service is the core of any Internet provider service that is human and not robotic and service that gives respect to the existing old subscriber..which I never got from You Telecom..