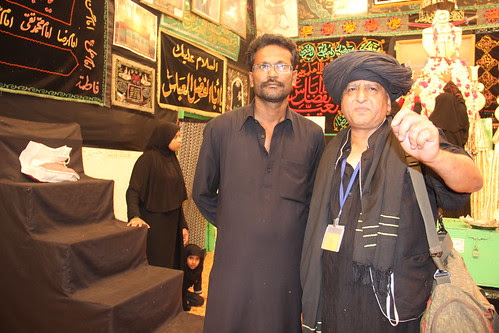 Abid Bhai My Humble Friend, a photo by firoze shakir photographerno1 on Flickr.

Abid bhai had come to Mumbai and I invited him to my house ..and Abid bhai takes care of Ashukhana Zehra and also accompanies the Bibi Ka Alam on the royal elephant adorned with precious gemstones.


My wife and I had stayed at Abid bhais house in Chehlum 2009 .. and I like his nature , he is totally low profile no spiritual arrogance and this time thanks to Ejaz photographer I shot over 15 memory cards this is my third one ..

Initially I shot all my images on Canon 60D bought extra memory cards and later shot with the Canon 7D .

And my laptop has no rest whatsoever ..I am missing my grand kids .. once they come I will try to spend more time with them.

My kama matam at Bargah was shot by Ejaz photographer and this is the first time in my life I shot Bibi ka Alam from Panje Shah to Chadar Ghat.

I did a lot of street shots too ..and other Ashukhanas .

And it is because of my friends at Choti Bargah I always felt at home..

I shot Darbare Hussaini and the slaughtering of the lambs here bu Hussain Dashtee 15 of them , he slaughtered one by one , giving them water to drink I think are my best slaughter pictures till date.

Beggars Stalk Me Wherever I Go 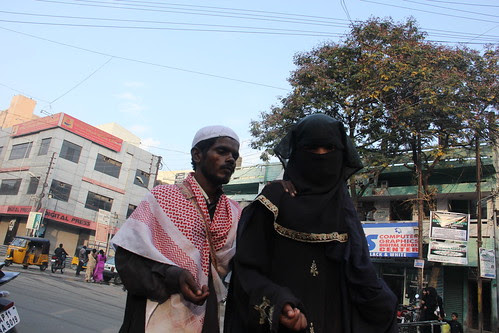 Beggars Stalk Me Wherever I Go, a photo by firoze shakir photographerno1 on Flickr. 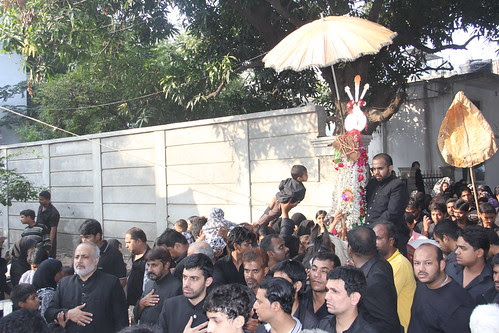 My Pitures Lose Their Continuity Because MTNL Broadband Crashes Most of the Time, a photo by firoze shakir photographerno1 on Flickr.

I shoot a story board , my pictures in a sequence as I shot them and Flikr up loader by nature is very slow and my Internet connection intermittent thanks to MTNL Broadband a Nightmare on demand , when I the uploads crash I have re upload them all over again thereby losing the fluidity of my shots.

Strangely a RGV Phenomenon my net shuts down every day at 8 am for a few minutes and again at 6 pm in the evening for 20 minutes ..this has been going on for several months for the 6pm slot and several years for the 8 am slot.

And they cant find the fault...

And I have been very busy on my return from Hyderabad ..my work most of all ..

My legs ache because of the long hours of shooting at Hyderabad and I have several cards to upload Choti Bargah Badi Bargah and the Bibi Ka Alam segment.

So this is the story of my life .. I have stopped shooting pictures since the time I returned from Hyderabad. 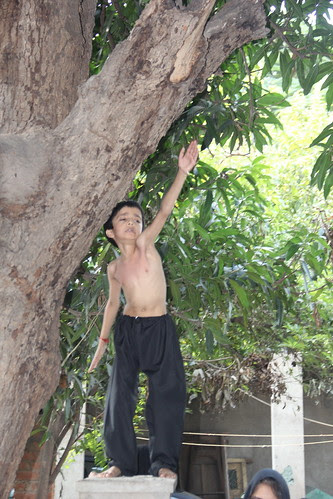 Shooting Moharam in Hyderabad After A Gap of 3 Years 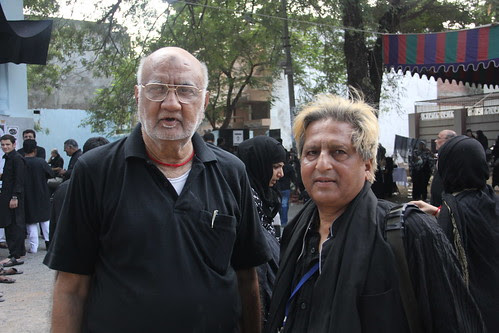 Shooting Moharam in Hyderabad After A Gap of 3 Years, a photo by firoze shakir photographerno1 on Flickr.
By Firoze Shakir Photographer No1 - November 30, 2012

To Be A Father With The Ideal of Hussain ... 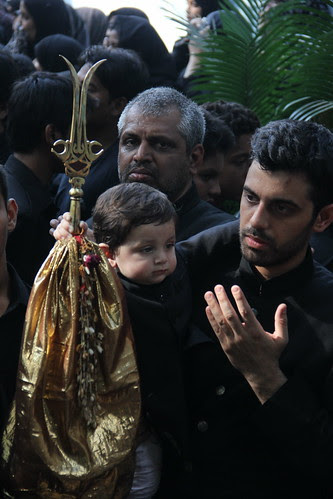 To Be A Father With The Ideal of Hussain ..., a photo by firoze shakir photographerno1 on Flickr.
By Firoze Shakir Photographer No1 - November 30, 2012

Photography is Poetry .. If You Compose it as a Poem 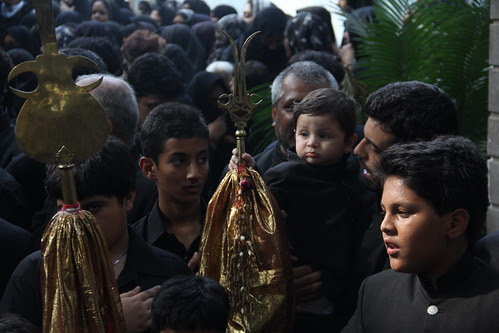 Photography is Poetry .. If You Compose it as a Poem, a photo by firoze shakir photographerno1 on Flickr.
By Firoze Shakir Photographer No1 - November 30, 2012

The Nawabs of Hussaini Koti 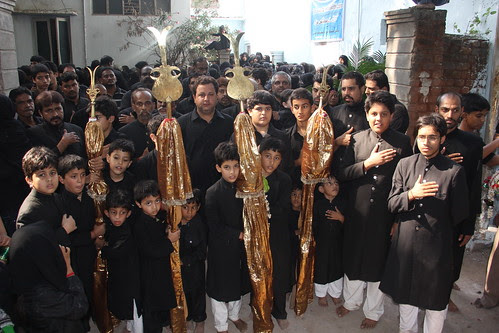 The Nawabs of Hussaini Koti, a photo by firoze shakir photographerno1 on Flickr.
By Firoze Shakir Photographer No1 - November 30, 2012 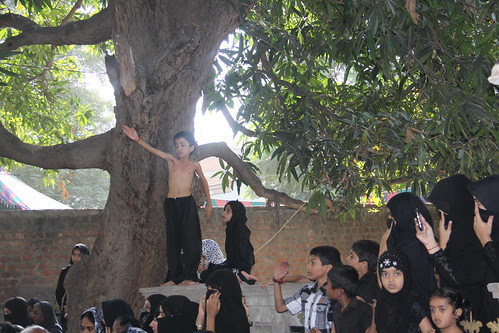 How Intense Is The Love of Imam Hussain You Can See From This Picture, a photo by firoze shakir photographerno1 on Flickr.

This Shia child stood on a wall unafraid and undisturbed doing his matam , beating his chest as the noha reciter .. continued with his painful elegy.. 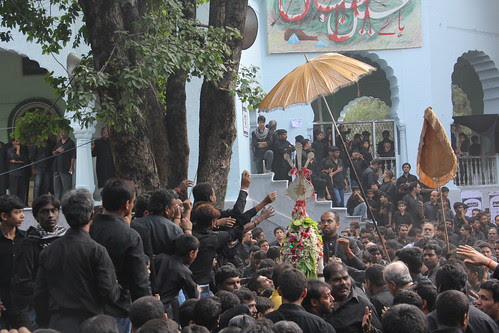 It Is Not Easy Shooting Shiasm Moharam..In India., a photo by firoze shakir photographerno1 on Flickr.

This is a very long series I shot standing in a tempo of the Nohakar reciters , sadly in Shia society it is the video photographer who gets access to shoot what he is shooting , and mostly he might be doing it as an assignment or professionally.

Bloggers or still photographers I hate to say it are treated like piece of shit , we are never respected , and I speak through experience , we are hardly given space ..And that is the saddest part of Documenting Shiasm anywhere in India.

I dont know why Shias are media shy , why they do not make a enclosure encourage photographers local as well as our guests from abroad and it is nothing but Tablikke Hussain , but than who can argue with decadent regressive minds among the Shia elders... and the few arrogant Shia brats misguided youth that bully seniors like us .. for doing what they wont ever do spreading the Message of Peace of Imam Hussains ultimate sacrifice at Karbala.


And I shoot pain , I shoot blood and gore , I take my chances I shoot lying on the floor as the sword blade and the zanjir blades fly around me.. but I shoot light moments of Shia ethos children etc.

I desist from shooting majlis or sozkhani as it is the same thing and video is the right medium to shoot this aspect .. I dont shoot videos.

I sometimes am pained that never at any given time did Imam Hussain lose his head or was rude curt or ever humiliated his opponent so I wonder why Shias get upset or try to be abusive .. I faced this at Zainabia Mumbai and decided never to ever shoot Moharam in Mumbai.. ..

I dont sell my pictures .. does anyone really buy pictures of bleeding backs heads or children.. I never found anyone ..people of the world dont like pain , and some have told me I glorify self affliction but it is our Protest our personal angst and freedom of Expression.

So shooting Moharam is painstaking , in my case it is my camera my time my money my passion and I shoot all this for the Non Shias Non Muslims a lot of my foreigner friends .. and I am happy that they now come to India during Moharam and shoot it along with me .

This year I told them I would not be in Mumbai but Hyderabad and I shot this entire series from 8 Moharam to Ashura both at Badi Bargah and following the Bibi Ka Alam from Panje Shah till haddar Ghat , which has got them all exited and they want to shoot it next year.

I began my Moharam series with the Guru Nanak GuruPurab that I shot while at Afzalgunj waiting for my Mumbai bus that was diverted from here to Nampally and finally I caught it from the highway...So I respect my neighbors religion after all we share the love of the same country his faith is my cultural inheritance too.

My friend Dr Glenn Losack in New York is envious of my Moharam in Hyderabad pictures , and if God gave him wings he would fly to shoot this with me , he is my grand daughter Marziya Shakir 5 year olds photo guru..she learnt to shoot from him and Viola from Denmark. My grand daughter shoots on Canon 7D ..

Nerjis Asif Shakir 16 month old shoots on the Canon 60D .. while I hold the camera for her .. so the camera in my house is the driving force of compassion devotion love for humanity.

My wife is a great shot hates photography, my sons can shoot .. everyone in my house an shoot on the DSLR.. .

So I think Shia parents must encourage photography so great moments of Ghame Hussain can be shared and people understand our ethos ...