Watching Cartoons The Way of Life

Watching Cartoons The Way of Life, originally uploaded by firoze shakir photographerno1.
By Firoze Shakir Photographer No1 - May 11, 2010

The Myriad Moods Of Marziya Shakir

Marziya has school holidays but every morning after a shower and change of dress she hangs her school bag on her shoulders ..ready to go to school.

This is Marziyas love for knowledge and thirst for education,. her books her drawing and her poetry recital her life's teacher for poems is You Tube.

She loves animals , nowadays it is a stray cat that comes to our doorstep..

Marziya most of the time thinks like a boy, she strips to her waist and does Matam the Shia ritual of beating the chest in memory of Imam Hussain martyred grandson of the Holy Prophet of Islam.

While shooting Marziya there is no composition or nicety of background...her dads shirt is lying in the frame .Marziya is impulsive and for a two year child who knows photography she hates being photographed.

Initially she was cool with me shooting her pictures now no more , I can only shoot her if she obliges.

Sometimes I defy her attitude and shot her despite her restrictions on me ..but there are times I dont shoot her at all.

Marziya wont leave the house without her head scarf or the hijab..her mother her grand mother her aunt wear a hijab too,,, so it is part of her ethos and ethnicity.


And if I learn to shoot videos or buy a video camera when I can afford it , it will be only to capture the myriad moods of Marziya Shakir my grand daughter.

The Ladder of Love 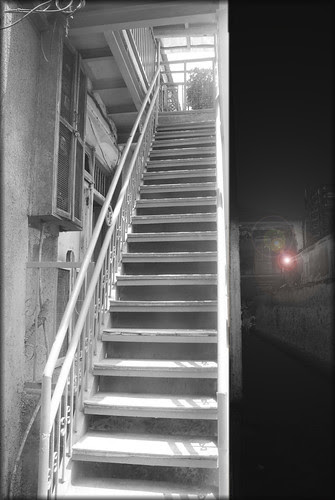 The Ladder of Love, originally uploaded by firoze shakir photographerno1.

her love she thus conveyed

Marziya talks in the third person..
her conversational zeal
Whatever she says
she adds Marziya to her childish spiel
she touches us every time she is our ideal
our life with her love she has holistically healed
a new facet of her mood she unpeels
a layer beneath a layer she reveals
we are all spokes of her karmic wheel 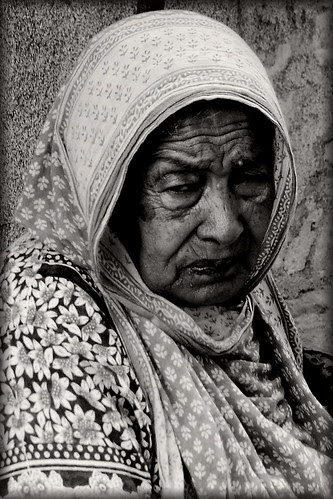 All Her Lovers She Skinned 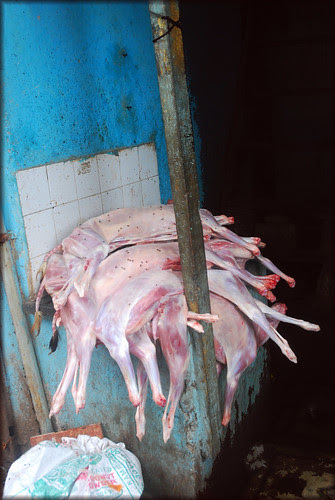 All Her Lovers She Skinned, originally uploaded by firoze shakir photographerno1. 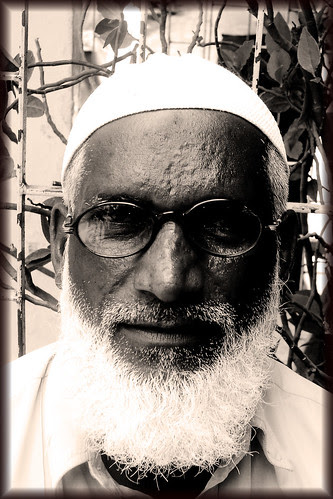 He is connected to the caterers of Bandra at Bazar Road.

He allows me to shoot him simply because I have shot him before a long series of his having a shave at the local street side barber , and the guy who shave him is barely 12 or 13 year barber ..

He is a Sunni Muslim and the Sunni Muslims of Bandra are a very peace loving tolerant community.

And I shoot people like him people who live with hope in the city of Mumbai and all these guys are from UP .. come to make a living in our home state Maharashtra.

The caterers of Bandra are mostly UP migrants and from a common village and some are related to each other .

The Muslim World of The Poor 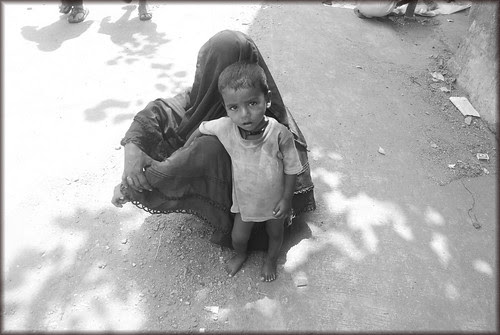 The Muslim World of The Poor, originally uploaded by firoze shakir photographerno1.

Muslims all over the world are not the same , religiosity wise they follow the same tenets and I speak of a universal Islam without sectarian strife...but economically there is difference of heaven and earth between the poor Muslim and the rich Muslim.


Who is a rich Muslim.

The rich Muslim is the affluent soul who sacrifices camels , dumbas goats not one but many at a a great price ,he is mentioned in the Urdu papers too for Bakra Idd.

He shops for a dozen or more making the compound of a cosmopolitan housing society into a war zone with blood and gore.

We cut our goats at the butchers and bring home the meat many others do too.

The poor Muslim like the one you see in my picture dont celebrate Idd at all, they beg from the rich this is the truth and my pictures shot of Idd Namaz at Bandra Railway Station dont lie.


There is a great divide between the rich Muslim and the poor Muslim , the poor Muslim once lived in a ghetto but now it has been taken away from him under one scheme or another.


I shoot Muslim beggars , I shoot them to awaken the somnolent soul of Muslim laid back society.

Poverty and the poor cant go by the swish of a wand ..understandable.


My mentor Dr Glenn Losack tells me I should sit down at eye level and shoot the beggar but I cant do it , I am a diabetic and my joints pain when I sit down , I have a diminishing eyesight , but I am not complaining I am able to shoot pictures ..because my pictures speak truth because my picture are shot in humility you see them as they are..

Yes simplicity is the essence of street photography, fast reflexes and speed.
Snatching fleeting moments from the jaws of speeding time is a tough task mind you.

Honestly who really cares a flying fuck for Muslim beggar not the Muslim Man at least he is safely ensconced head bowed in prayer in the nearby House of God... 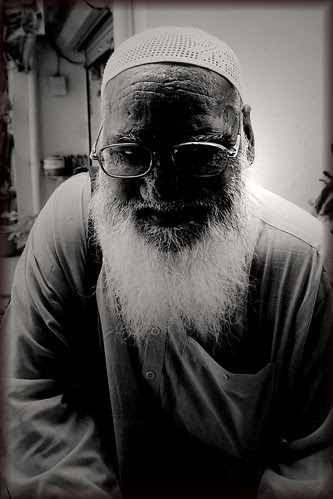 I shoot Muslim beggars , I am a Muslim beggar myself.He begs for a few coins I beg for peace and a tranquility of mind and soul.

I have been going through a very bad phase and a stressful life a phase that does not seem to end ..maybe to forget my own misery I shoot other peoples miserable lives .

This was the first time he came to my workplace and I could not find my wallet and my staff was not around, he kept talking about his misfortunes and he was not a professional beggar he had certainly seen good times too..

I found my wallet I gave him some money and told him I wanted to take his picture to tell others the story of his pain , he stood there I took a few shots.


Whatever his pain he had a glimmer of a smile on his face , a smile of hope..I did not ask his name yes he is a Muslim beggar reflecting my own beggarly state in his eyes.

He kept blessing me and invoking Allah to show his kindness for having given him alms.

After he left I found both waving out to him..

Once Were Made For Each Other 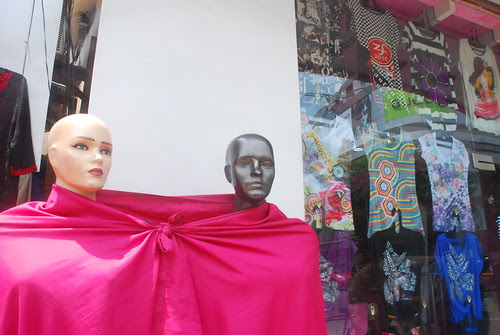 Once Were Made For Each Other, originally uploaded by firoze shakir photographerno1.

we met by fluke
a mere suggestion
of the web master
on a social networking site
i was blackish brown
she was wheatish white
such was the power
of cybernetic love
chatting away
we fucked all night
every morning
my body bloodied
red with her love bites
our love poetic
ethereal but
physically
airtight
passion
to excite
pillow talking
my way
into her ears
while she
held me tight
till one day
due to a
misunderstanding
we both had
a great fight
it turned out
my lover was
a jilted
transvestite
when we
had first made love
due to power failure
a solitary candle light
she had blind folded me
alright ..her bare feet
her nebulous
stockings skin tight
her poison
worse than a snakebite
but when i realized
i had been conned
in love
i almost died of fright
besides the solitary candle
lighting the darkness
she had a 7 inch
torchlight 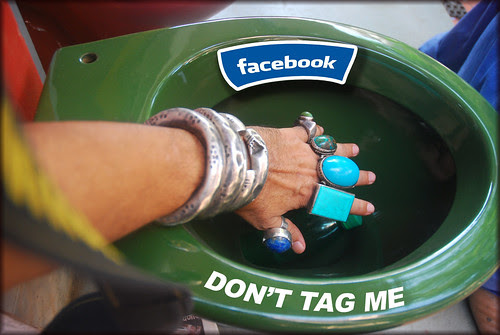 I have done nothing to this picture I assisted her hold on the camera but she hit the trigger herself..nor have I tweaked the picture ..Marziya has shot the blithe soul of her grand father and demystified it too.

I showed her this picture and asked her who this is she answered back Marziya Shakir ..than I asked her who shot this photo she replied Dada ..meaning me.

Than giving me a smile she said please play Ya Hussain Ya Hussain she strips to her waist and beats her chest to Ali Rizvi Sachays Noha..Run Main Hai Nala Kuna

Marziya is the future of my photography , she sees a world of pictures at an early age I began shooting 10 years back..and I am still learning .

I am learning from the new kids on the block like Nitin Sharma from Lucknow ..and a galaxy of photographers I added as friends on Facebook thanks to Roland W Luthi and Michel Portier.

Michel has contributed to my angst I am indebted to his friendship.

Marziya is an impulsive photographer like me , she hates being photographed and I dont blame her she has been my favorite model with over 9889 or more pictures from the second day she was born.


But if I give her my Nikon D 80 first she will place the strap around her neck than lift the camera to eye level, a very tough task I assist her and than she shoots the trigger , than she will search for it on the monitor..so she knows the camera .

I did not know the camera when I was two year old.

I wish I could shoot her shooting me ..but for the moment this is enough.

Wife does not much care for photography so two photographers in the house would be hell for her.

Than I get fucked totally when somebody asks me what camera do I use or what lens do I use..
I use my mind more than my camera .. my camera is just a means to getting the image that I first shot in my head.

And I am not teaching Marziya to become a photographer am only strengthening her bond with life through a tiny keyhole ..a viewfinder that reaches the mysteries of the human soul.

I dont want to boast about my talented grand daughter either..I never took such pains with my own daughter at all, those year I was drunk to the gills.

So I have skipped the poem here , I just wanted get over my thoughts bring them out in the open so to speak.

I have not forced photography on Mariziya she has inherited it from me as gift of her birthright.

I could place my camera on a tripod and make Marziya a shooting photographer in no time but I want her to feel the weight of the body of a camera ...let it slip from her hands fall on the bed but she is smart she will not hold the camera without placing the strap around her neck.

And as the heat is real bad in Mumbai, I have stopped taking her out completely she goes to the garden with her mother in the evenings.

I shower thrice a day change my top thrice over.. and I just cant bear this years heat even after having lived in Mumbai since I was a year old.

I will also post Marziya pictures shot of me..


To Dr Pankaj Sharma , Roland W Luthi and Michel Portier.. dedicated to Nitin Sharma a who holds a great future in Photography.