Tennis In The Rains With Coach Surendra Pawar Bandra

The World of The Humble Ear Cleaners of Mumbai

A Tribute To The Ear Cleaners Of Bandra By Laurent Salisse 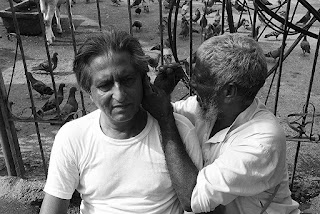 Laurent Salisse is a French photographer I first met accidentally when he came to shoot Ashura in Lucknow Moharam..in 2007 .

We shot the Tazias and the juloos and he shot my scourged back and my head that I had cut with a dagger the night before ,, I took him to my inlaws house at Nakhas ,and he shot the House Imambada and met my mother in law too.

Cut to post the bomb blast in Mumbai we met at Leopold ,, I took him to my mothers house at Strand Cinema and he shot the Colaba Causeway ..2009 .

Than we met again by chance on the banks of the Ganges on the day of the Shahi Snan Basant Panchami Allahabad 2013 ..

But in 2015 he decided to come to visit me in Mumbai ,,and we shot some street scenes together ,,,he shot the Nasik Kumbh too .

Than he called me from France he wanted to shoot the Malangs at Makhanpur 2016  and we again met at Makhanpur ,, it was a brave shoot , Laurent shoots with a backdrop and medium format ,, I collected most of the Malangs and he had a whale of a time shooting their portraits ,, for me it was a learning I shot too.. and shooting with Laurent is a lifetime experience ,, he is cool not demanding and highly respectful of local traditions customs he wore black and a head scarf so everyone thought he is  Malang too..

The Malangs loved him and would go out of their way too see he was comfortable ,,

This  time he called me again he wanted to shoot the Khamakhya Temple festival and I fell for it line hook and sinker I somehow booked my train tickets ..now I am waiting  for Laurent to get his airtickets if not I will go alone ,, I did try to connect with my Naga Guru because I may not be able to afford hotel accommodation I dont have that kind of budget and this is my self sponsored trip..

I dont have any friends in Assam close to the Tenple but I think the Goddess wants me to come ,, and I will go surely ,,

I leave in another week and will return by the end of the month ,,if my Naga Guru was going I would have had no problem of lodging or boarding as I would stay with the Nagas .

My picture with the earcleaner Nabi was shot by Laurent

Email ThisBlogThis!Share to TwitterShare to FacebookShare to Pinterest
Labels: A Tribute To The Ear Cleaners Of Bandra By Laurent Salisse
Newer Posts Older Posts Home
Subscribe to: Posts (Atom)