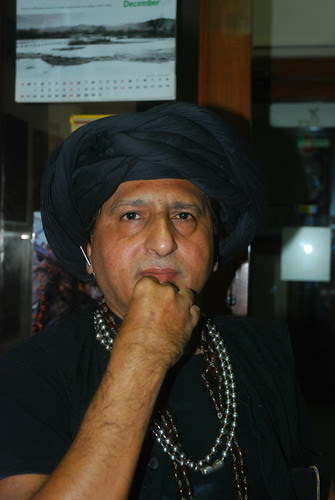 This is my right hand that I accidentally cut with a sword during Chehlum in Delhi , it is permanently out of order ,I cannot bend it and looks more like the hood of a Cobra snake..
picture was shot by my dear friend Subash Solanki of Subash Electronics..

I type with a single finger of this injured hand and I shall use the sword to my head this Ashura again but not in Mumbai. 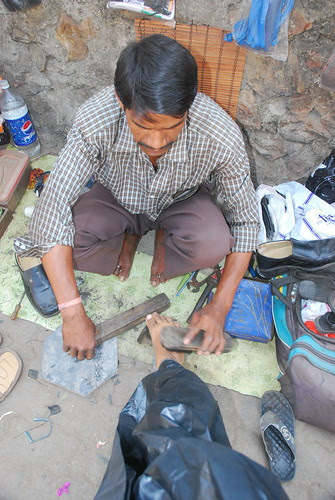 The Bandra Cobbler gives my patent leather feet a shoe like shine for Rs 5..with polish Rs 7.. now go eat your heart out...

Marziya is the youngest kid in her playschool, the other one is her childhood friend Mehrin Mukadam, Mehrin is a few months older than Marziya and have grown in the same surroundings..Mehrins father Tehsin and Marziyas father Asif are also very old friends going back to school and college times.

The Xmas Party was held before Marziya left for Lucknow before the Xmas holidays and as the lady who runs it is a Shia the party had to be done before Moharam.

She had asked me to shoot a few pictures , but when I dropped Marziya at the party took a few pictures , she informed me Santa Claus was coming between 12 and 1 pm I could not wait that long I had a meeting at Lokhandwala and so I rushed towards my workspace.

I returned from Lokhandwala pretty late and these pictures I am posting today at Flickr.. watching Marziya only on a computer screen hits me real hard..but as they say absence makes the heart grow fonder..

I am also wondering that her father in Karbala for Ashura must be missing Marziya more than me as Marziya woke up at Namaz time along with her dad and it would be several hours before she went back to sleep..she would wake us all up in the bargain too..

Marziya does not mix with the other kids , she is friendly with them but her world is different from theirs , her world is the beggars on the streets , the friendly cops at the Bandra Police Station the Umbrella lady of Bandra Reclamation , the Leper lady of Boran Road , Lucky the Labrador..the goats of Bazar Rad .Appu the limbless at Mahim Church..Hafiza Bi and blind Ismail Chacha and last but not the least the Bandra Bazar Fish Market and Mangla the Koli woman..

I almost forgot she is a two year old cyber child , you have watched her grow and she is also a part of you as she is ours..yes you are family too..and I am crying all alone in the silence of my house.. 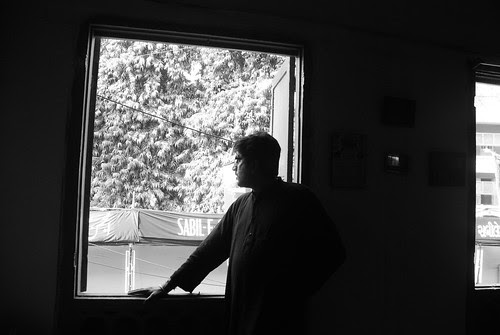 dedicated to a son yasoob abbas

I wrote this as father and shot this as a poet 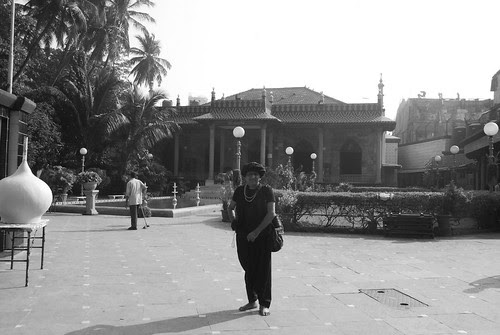 The aura , the spiritual ambiance of Moghul Masjisd mesmerizes and catapults the human soul.. towards God, and God lives at Moghul Masjid and you need eyes of poet to see him too ..his beauty reflected in the fountain among the fishes living in peaceful coexistence..

I have been enamored by Moghul Masjid it draws me in , it brings out the photographer in me.. and when I poetize it, it transforms and metamorphoses me as the Shia barefeet blogger of Mumbai..

You have to see Moghul Masjid beyond its architectural beauty and grace , move through the winding corridors of you mind till you find God deep in the caverns of your heart. 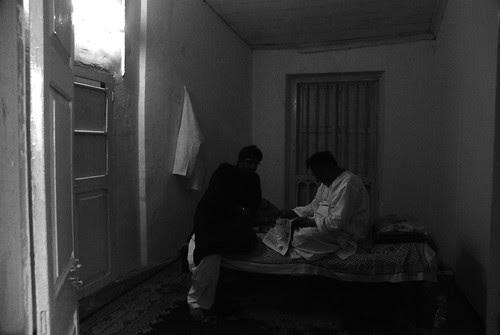 Father and son grieving for the loss of the most important pillar of their life - Maulana Athar Saab Mirza's wife passed away last month..mother of Maulana Yasoob Abbas ..I shot this in low light to show you the emotional gloom in their life..but than as Shia no pain is greater than Ghame Hussain.. 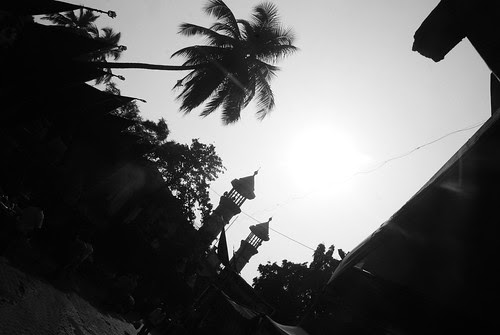 moghul masjid is under a new trusteeship.. a new hope for a heritage mosque a pride of our shia ancestry..

Bandra The Garbage Queen of Mumbai 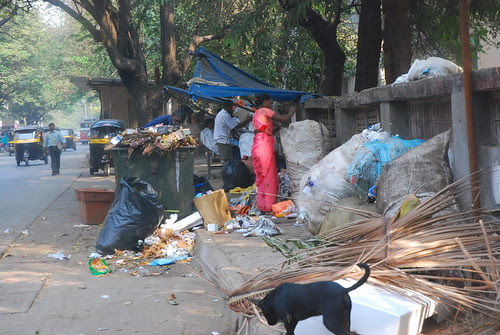 Sorry if my title hurts you, it is intended to hurt and hurt hard..but this is the truth , and this is on a road that connects you to Bandra Hill Road and Bandra Waterfield road, some top cops live here , this is an area that borders a police residence too and you see this day in and day in full public view ,, and this poetically inspired me to shoot more garbage sites..till the comatose conscience of the newly elected leaders of our political system wakes up, mind you where the minister stays you will never find such over dramatic scenes , the only place where this is an exception is where the corporator of Bandra Bazar Road Mr Rahebar Khan lives..it is the worst the stink the filth and the fulsome air of death.. dead fish , dead meat and dead conscience of the locals who tolerate at all this..

Welcome to Bandra -The Garbage Queen of Mumbai..

Marziya Shakir and the Bandra Police

These are pictures shot before Marziya left for Lucknow, Marziya does not get scared of cops , and she has a special regard for the Bandra police , her favorite is Uncle Prakash George Senior Inspector and Constable Ganpat , whom she has met at all the political rallies I shot as a blogger .

Marziya is a favorite of the cops too at the Bandra Police Station , they all know this kid and her crazy grandfather who walks barefeet most of the times..

When ever a police van passes our area it stops to wave out at Marziya who waves back at them..she calls them Police Uncle..

I dont know if she knows what the police are all about, and I am sure the police personnel too have daughters or grand daughters like Marziya , and I am sure beneath the khaki wardi and the stress policemen are human too, human faults and frailty are part of our existence..

Than for a moment I think of a 14 year old girl allegedly molested by a Senior Police person , intimidated as the newspapers report, her family goes through hell , and finally she commits suicide..and the political system its patronage allows the cop to rise and rise and rise..After 19 years he is imprisoned for 7 months I am not finding fault with the verdict I am finding fault with the system that destroys everything that Justice stands for.. and the person even after this is defiant enough to say he will go for appeal.. and a friend in Australia fighting to keep the soul of her dead friend alive,,

So maybe we should not paint all the cops with the same brush..I am stunned by my own silence and Marziyas reverence for the Bandra cops..

These are a few pictures shot before Marziya left for Lucknow to her maternal grandparents house in Lucknow with her mother and my wife for Ashura .

Her father is in Karbala..her grand father here in the wastelands of his computer ..and the wide net.

I have finally downloaded a 4GB card, pictures that were in my camera since a long time..

Now normally when I assisted Marziya to shoot with my Nikon D 80 holding it partially in my hands she would hold it too, push her face in the viewfinder and I helped her with the trigger too, but the day I shot this picture she moved my hand away from the trigger and aimed it herself.. she shot her mother and my wife..unfortunately these are pictures I wont be able to show you as they are marked family.

I speak to her every day and I know she is happy as her maternal links are as important as my love for her.. her Lucknowi roots the city of her mothers birth.

There are some nostalgic pictures on this card , some sad stories too I hope I can post all this before I leave Mumbai to shoot Moharam in some other city.

One of the strange stories I have not mentioned and you might not believe pertains to Farzan the Parsi boy who keeps Lord Ganesha at his house every year, his father was knocked down by a speeding cab, and according to Katy his grandmother I dont know how but Farzan came under the speeding cab , however nothing happened to him he was unscathed , his father broke his leg, I dont know the exact details but I will when I meet his mom also in the hospital.. they never caught the cabbie I believe ..

Marziya is very fond of Farzan only because he has a large size Noddy at his house.

Marziya sees the streets as I see it , she reads the pathos through her child's eyes ..everybody inquires about her wherever I go.. specially Hafiza bi wife of blind Ismail Chacha.. and Mangla the Koli fisherwoman.

Lucky the Labrador who belongs to Omkar Shelar keeps waiting near the lift waiting for her to come and pet him.. her parents dont like dogs Lucky is the only exception , and he does not touch Marziya..

There is a young girl near my shop who befriended Marziya recently she would buy chocolates for Marziya every day, and they got along pretty well, now this young girl is also eagerly waiting for Marziya return from Lucknow.. this is love a love that seeks love out..

Having a crazy grand father is one thing but having a human sensitive grand child is what this blog is all about..I have since the second day of her birth posted over 8158 photos of her at Flickr and maybe another 500 that are marked for family only.