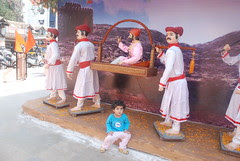 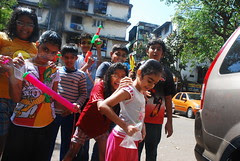 Marziya Shakir Thanks StringFly In Humility and Gratitude, a photo by firoze shakir photographerno1 on Flickr.
226,726 items / 1,878,432 views


Marziya Shakir 4 year old street photographer gets a mention in a blog post at Stringfly..

Today is March 8th, the end of the winter season on the last full-moon day of the lunar month. To the Hindu population of the world, today is the festival of Holi, the storied Festival of Colors -- a religious spring festival in praise of Lord Krishna.
This is the day where anyone who is brave enough to walk the public streets becomes fair game for the colored powder and water, which are a hallmark of the festival of Holi, to be smeared and sprayed all over them.
Holi is a joyous day of relaxed social norms. Every year on Holi, the media is full of colorful images taken by professional journalists who enter the psychedelic fray of colors, risking their expensive camera equipment in the process, to document the unrestrained excitement and fluorescent fun.
Today, we take a different approach. We draw your attention to Bandra, a suburb located in the northwest of Mumbai, India -- where, through the magic of StringFly, we are able to show you what Holi looks like from the perspective of a very young child.
At four years old, this StringFly user -- chaperoned by her grandfather, is the youngest street photographer we have ever heard of. Her photos show great promise...and her story is one you won’t soon forget.
THIS IS THE DISCUSSION I HAD WITH HER GRANDFATHER...

Thank you for helping your granddaughter to upload her images to StringFly. Amazing to think that these serious images were taken by someone so young. Our users would love to hear more about you and your granddaughter. How did this hobby of hers begin?
My name is Firoze Shakir. My granddaughter, Marziya Shakir, was born in November of 2007. She saw a camera for the first time on the second day of her life.
Her teacher and guru is an American Jew from Manhattan named Dr Glen Losack, MD...he gave Marziya the Nikon D 80 she uses. She also has experience using a Canon EOS 7D. Marziya began actually shooting hand held pictures at the age of 2. She has her own website - and she is active on social media, with my help and under my guidance.
I am an experienced street photographer, and I make every attempt to pass down some of what I have learned in my photography to Marziya. I have educated her of virtues like pain, charity, humility and love through the camera.
Many of the photos you two have uploaded are shots of today’s Holi festival in Bandra. What was the experience like, taking your granddaughter out into the streets to shoot these images?
Holi’s feast of colors is a festival of human touch, love and humility.
As a 4 year old child, Marziya did not envy the fun the other children were having. We are Shia Muslim, and we play Holi on March 21 for Nowroze (Persian New Year).
These Holi pictures were shot on Marziya’s Nikon D 80. The revellers were tempted to throw water colors on the camera and lens -- but my presence kept their thoughts at bay. I am highly respected in Bandra. I am a fashion stylist and manage a fashion store called Badasaab. My boss Mr Kishore Bajaj owns the franchise of Brioni Italian clothing and Hakkasan and Yuatcha Dim Sum -- an international restaurant chain.
When it comes to photography, Marziya shoots without hesitation. People and surroundings don’t intimidate her at all...she shoots clinically.

I don’t need to delete what she shoots and she knows every heart beat of the camera she holds in her tiny hands -- be it the Nikon D 80 or the much heavier Canon EOS 7D
I noticed that you uploaded some photos which show that your granddaughter is capable of tackling more serious and grown-up subject matter as well. Talk about some of this other photography.
Marziya has been shooting beggars, hijras (India’s male to female transgender population) and street life from the age of 2. Marziya shoots life as is where is - in people and places where change has yet to come. This is a photo she took of street barbers, who are mostly migrants and eke out a living on the roads doing human service -- grooming the common man.
In the next photo, Marziya captures the angst of womanhood, on International Women’s Day (March 8th), through hopeless and homeless women living through life’s struggle on the streets.
I am also teaching photography to my second grand child Nerjis Asif Shakir. You might think this all sounds crazy, but we are camera friendly and we believe pictures are the greatest instruments of self healing.
I thank StringFly for their passion in promoting peace, hope, and humanity through technology, news media and photography.
We have to encourage our youth, our younger generation, therein lies the success of our human race... it’s the least we can do. They are our future and that is what I believe in completely.
See more of Marziya Shakir’s photography at StringFly.

Take photos. Be social. Win rewards. StringFly is the app that harnesses the true power of your smartphone camera. From breaking news, to fun assignments, to brand sponsored rewards -- this is your life...unfiltered.
By Firoze Shakir Photographer No1 - March 09, 2012

Most of the Hijras I Shoot I Never See Them Again 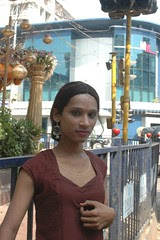 Most of the Hijras I Shoot I Never See Them Again, a photo by firoze shakir photographerno1 on Flickr.


dedicated to a friend
ET of One News