I Shoot This Every Morning And There Is No Garbage Bin 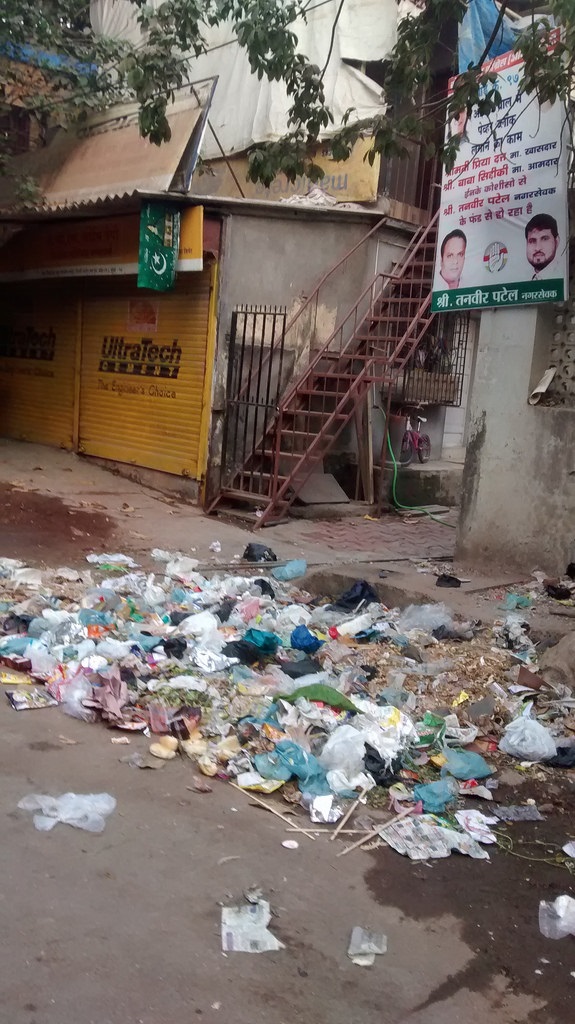 And I bet the Congress Corporator Mr Tanvir Patel has never seen this though he looks out from his banner along with the other members of the defeated Congress Party Of Bandra .

And maybe because of their Congress Banner the BJP dont walk to take action against the early morning mess on this Gen Arun Kumar Vaidya Marg.. I mean there are some places in Bandra you can shoot a picture a day but the garbage will never go away.

And I think it is not my job to shoot this I dont stay here , but than where I stay Bandra Bazar garbage dump is worse than this .. and the Municipality is totally incompetent clueless about garbage management or Dengue or Swine Flu prevention.

And I think Mumbai surely needs a corporate CEO someone accountable who will take blame and responsibility and not pass the buck as the Mumbai Municipality does ...

And it surprises me newspapers asking children to help clean the sea front and dirty areas when they should be holding the ears of the Municipality bosses shoving a broom in their hands and making them clean Mumbai..

And Hindustan Times wants  to be Numero Uno in Mumbai so getting volunteers cleaning Mumbai helps sell the paper ,,Folks of the Times of India live in Ivory Towers so surely you dont expect them to mess their manicured fingers in shit and garbage.

The Rickshawalas of Bandra Reclamation 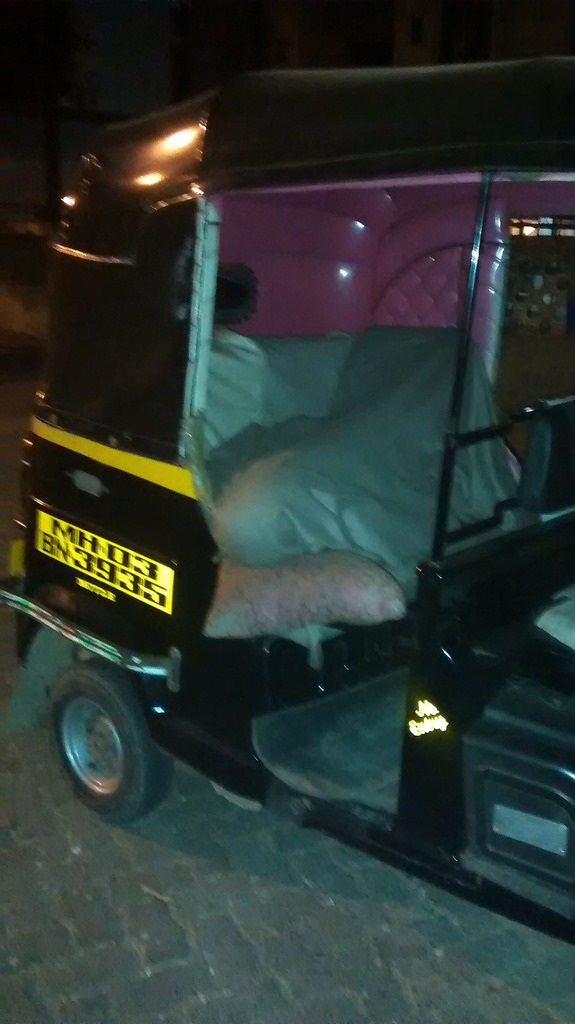 Most of the ricksha drivers are from Uttar Pradesh and most of them are from Kannauj a few are from Allahabad .

Some of the rich rickshawallas have rented rooms at Lal Mitti or at Nargis Dutt Nagar and live as a community , maybe up to ten in a room and they share the rent possibly.

Most of the rickshah belong to the drivers or to the bosses ..a large number of ricksha drivers live in their rickshas , sleep in the rickshas , As there is no public toilet at Lal Mitti most of them use the mound of Rang Sharda , They bathe at other public toilets it seems .. and tea and snacks at the the lady Chaiwali at the corner of Bandra Reclamation.

Close to this ladys tea stall is another tea stall near the MNS office he makes vada pav pav bhaji and has a booming business and has a tea stall too.

In the morning when I set out for my walk the ricksha wallas or all up , and they have hired a few guys who clean their rickshas , I know most of the drivers as they take me on my trips around Bandra Juhu or Kurla.

And as most of them know I am a Dam Madar Malang the Holy Shrine of Makanpur is very close to Kannauj, they are very hospitable and kind..and hospitality and kindness is not the key words in the dictionary of the rickshawala.

But compared to the Bandra Shastri Nagar sharing ricksha goons these guys are more timid and not that blunt or rough.

But they get robbed by cops too,beaten and bullied and have to bear the torture , so most of the Rickshas here are are affiliated to one political party or another .

And these are my mental estimate of the ricksha guys i have talked to , I have not interviewed them per se.

And somebody more journalistic than me should do a storu on these migrant workers all UP based and sadly none were invited to the Tilak ceremony of the Mulayam Singh scion at Saifai.

And seeing the happy lot of Delhi rickshawalla who have a great patron in Mr Arvind Kejriwal they hope that he comes to Mumbai and takes up their cause as they say the Unions here are only self beneficiaries and have done nothing to save them from rogue cops  and others.And most of them tell me they would support  the Am Admi Party to get a better deal and better prospects living here ..some are Mumbai based voters among these lot ,their patrons and sponsors who are rich rickshaw owners  .Most of them predominantly are Muslims .
I think the Hindu ricksha drivers UP migrants are from Gazdar Bandh.. one of the biggest ricksha hubs of Santacruz .all parked at North Avenue close to the Potohar Gurudwara.

The Ragpickers of Bandra Reclamation And My Diabetic Dilemma 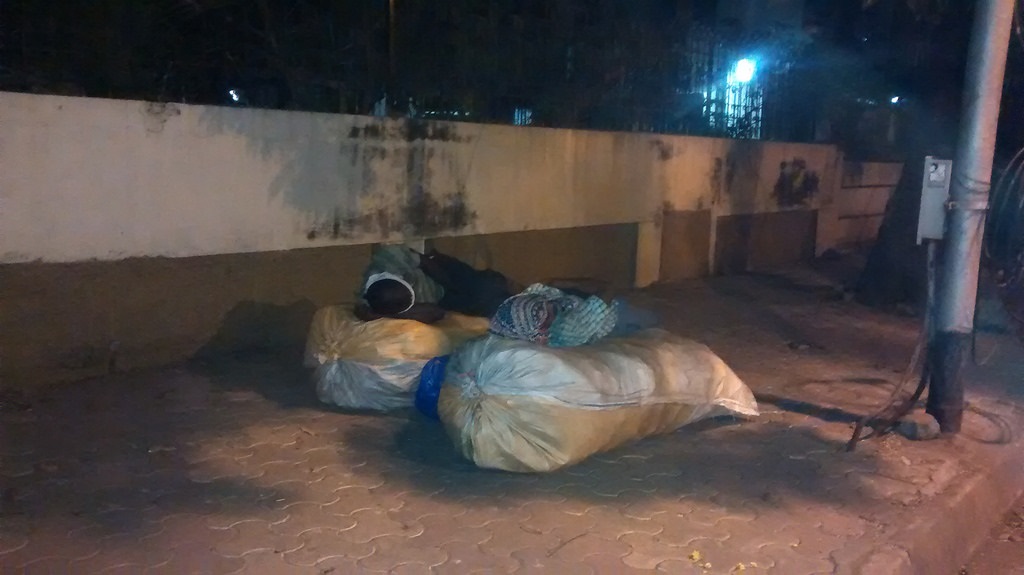 Assuming they begin scavenging garbage sites in the night for plastic items , booze bottles cardboard and electrical wire metal pipe that fetches good money in the bhangar ,name for the guys who buy their stuff they come and sleep here on their sacks,.. I have been seeing them regularly on my morning walks .
And though most of them are drugaddicts knows as gardalus , they do a good job a better job than the  uniformed Municipal staff ..
And  they earn about Rs 250 to 300 per day, no house , they sleep on the roads and the money a bit for food bathing in the public toilets the rest I assume goes on their drugs.

And it is a sad tale of drug abuse , some thrown out of homes no rehabilitation , and no redemption from their sudden fall to Hell.

And I shoot them in such a manner with my mobile phone , rapidly so as not to wake them up and get into a street squabble ... most of these guys are hyper violent by nature think society is their worst enemy..

This morning I left home at .6.12 I reached the end of Bandra Reclamation where a lady lights two lamps every morning , on the way a tree had fallen blocking the road but it matters not.
I was at the Bandra MET Gates at 6.45 am .. took my 11 rounds and than came to the Gen Arun Kumar Vaidya park that is used as gym by the locals for free hand exercise ..I did some exercise and moved out after a few minutes via the Bandra Masjid lane taking a short cut from the Beef Market of Bandra Bazar ...

I was home by 8 am... and I wish I had been serious about walking but I was a total couch potato , hooked to the net by my balls .. no exercise no physical activity to speak of.
I only hope I dont give it up today was my 14 day of walking.

At home I have been taking a concoction  called Paneer Phool, it is wild fruit , tiny with a skin , that my wife peels about 6 and soaks it overnight , and it is bitter I have this every morning .This Paneer Phool is sold at Kalidas at Bandra Bazar Road he says it controls Diabetes and cost Rs14 for 100 grams .It has to be taken for 2 months to get positive results .

Kalidas is a 100 year or more provision store at the Bazar and has herbal medication for stomach problems ulcers and best place for home remedies .

My sons are taking Ojamin a pancreatic tonic every morning on an empty stomach it costs about Rs 540 and is available at Bandra Medical stores Hill Road . Mr Nair says that Salman Khans staff Danish a diabetic has been taking Ojamin and stopped his other diabetic medications and Salmans dad Salim Khan Sab also recommends Ojamin I am told .

I had been taking it too , but now I am trying Paneer Phool I find it cheap and best...but I take my other diabetic medicine too. I was on  Insulin a few years back but I gave it up..

Than I fell sick had a diabetic wound viral infection bordering on bronchial asthma .. I took my blood sugar again in Jan 2015

And so two ragpickers can become an inspiration of a personal blog..on health  and diabetes..

Should Prostitution Be Legalized ,,,An American Point Of View 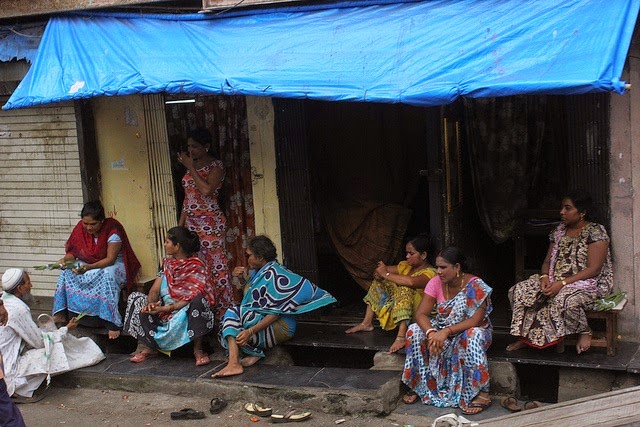 The picture was shot a few years back and is part of my documentary of Peela House Red Light Area the last old bastion of street prostitutes also known as the Mumbai Cages .
Sadly because of my pictures being stolen here at Flickr I disabled this set Redlight Area of Mumbai and the Hijras of India from public view .

A Hijra beauty Heena stayed at the cages and most of the property belongs to the Hijras that own women and hijra prostitutes I am told ,,I have not visited Heena for a very long time.

I personally felt Prostitution should be legalized in a phased manner and with outputs from the various social NGO s that work with them.. might be the exploitation and the kidnappings and women sold here might end ,, and totally banning and criminalizing child prostitution of both genders .

But than Article 377 needs to be scrapped too..

Legalizing prostitution only increases the demand for it by deeming promiscuous behavior socially acceptable, simply continuing the cycle of sexual abuse in the sex industry.

Selling sex is a dangerous, harmful profession and shouldn’t be promoted by legislation. Legalization means that the state imposes regulations under which women can be prostituted. In effect, regulation means that under certain conditions it is permissible to exploit and abuse women.

In locations where the sex trade has been legalized, including Australia, Germany and the Netherlands, the number of sex trafficking victims significantly increased after legalization, and violence is still prevalent in the industry.

Prostitution is an extreme form of gender discrimination. Legalization of this violence to women restricts women's freedom and citizenship rights. If women are allowed to become a legitimate commodity, they are consigned to a second-class citizenship.

And that is not even going into the issue of how the behavior is against God's laws.

Discrimination against women is still rampant all over the world, and I understand that men really don't get that. But, you should. That is what we need to be working toward, NOT MAKING IT WORSE!

Sorry, for the rampage, Firoze. I get far too frustrated with the whole subject matter. Prostitution seems to be "acceptable" in so many ways.... after all it's called the "oldest profession". The way things are now, these women end up being the "criminals" even when many/most are being forced into the "business". Those doing the forcing and pimping are overlooked. Occasionally, the law will work correctly and the 'pimp' will get arrested and taken off the street. Without that law, the women would no longer have any protection. I know all the arguments about "but, they could get healthcare" and keep them out of jail. Sex traffickers often target vulnerable women with abusive backgrounds. These women need help to break the cycle rather than continue it as a socially acceptable commodity. The real answer is more along the lines of criminalizing the customers, to help get rid of the demand. Acknowledge the violence and exploitation for what it is; educate and inform and teach that all human life is a blessing that should be cherished. People say that is impossible, that prostitution will be around forever.... why is that? Why would we even accept that as a possibility? Never should the abuse of another human be legal.

The only reason any of these things happen... from domestic violence to these beggars being overlooked and abused, is because humans have forgotten the very basic human interaction should be to seek and find those things which neither take from nor destroy another soul's progress or abilities. If we can teach that to the world.......

Email ThisBlogThis!Share to TwitterShare to FacebookShare to Pinterest
Labels: An American Point Of View, Should Prostitution Be Legalized 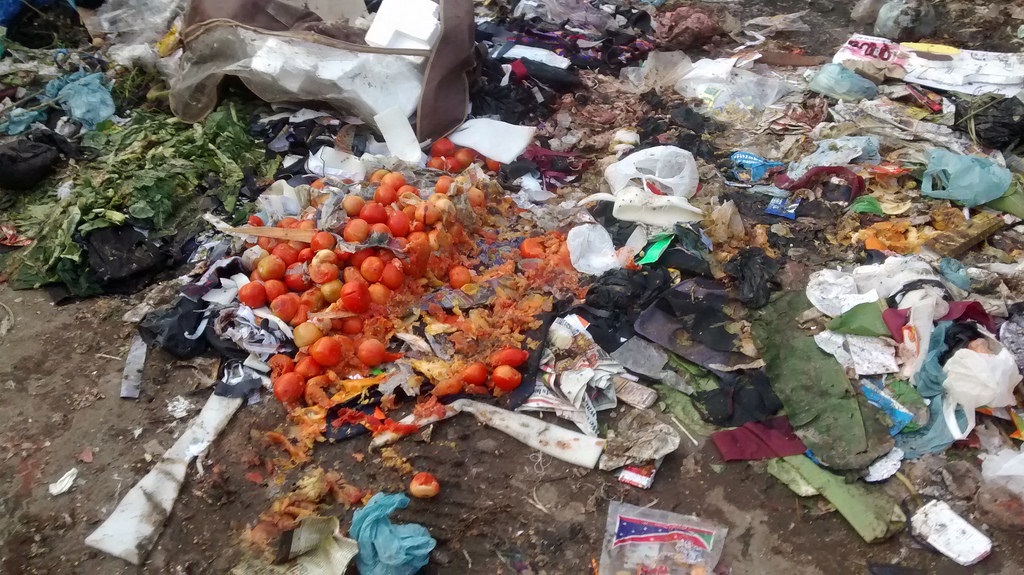