I Shoot People Who Dont Even Know I Am Shooting Them 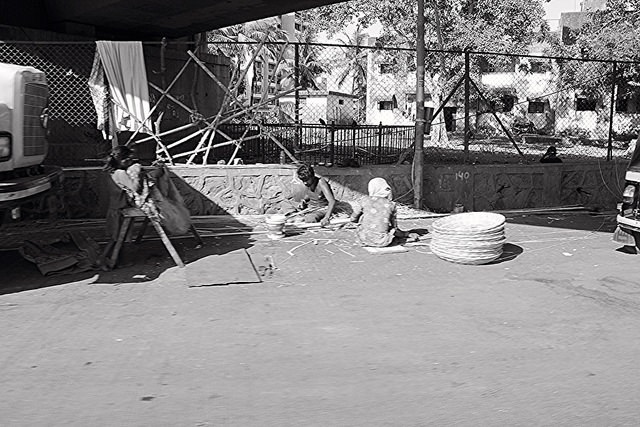 And I shoot people who perhaps dont even know why I am shooting them,hard industrious Indian people of the street , the entire family at work eking out a living ,, very close to where I stay .

I have always shot them from a moving cab or bus many a times the softer sensitive part of me has wanted to reach out too them talk to them but I have no time ,,and than I wonder what do I talk to them , I am a street photographer and not a storyteller of words .

And they live on the streets close to the Muslim slums ghettos of upscale Bandra among ruffians drugaddicts too, and this community can be found near Mahim station too where their girls boys beg at the traffic signals to supplement the family income ,, their children are abused molested , attempts were made to kidnap them but they continue to live make cane baskets.

Most of these weaver women come to Bandra Bazar to buy the leftovers of chicken from the chicken shops .. it is the only cheap meat for the poor ..

The women of this community are frail looking not heavy boned , but work non stop they wear a long skirt and a long sleeved blouse .. very simple attire that does not change .
The guys wear dhotis and long shirts very rustic and are cutting the bamboos the kids also peel the bamboos ,,

In a rough shod cradle hanging on a support is the new born baby unaware of its surroundings and you can see its silhouette when you pass by in a bus or a cab.

Even the kids of these basket weavers beg at Bandra Reclamation signal but young Muslim kids from the slums beg here to after they return from their Municipal schools .


And Bandra sadly has not changed much in 15 years not the poor side of Bandra , more slums keep coming up on empty public spots , they soon become vote banks for the long lasting political sartraps of our area .

Change in Bandra is for those living near Joggers Park Band stand .. the poor live as they and will die as they live ..political generosity has been showered on those who help the leader , he is the head tout who gets things done and reaps the rewards in extra rooms and other such benefits ,, this is also seen where they live .

I am a Sobo person but now living in Bandra since 26 years ...and the Bandra I live in is the most neglected ugliest filthiest place abutting a disease prone market with no garbage management , open gutters , and thanks to the pictures I have shot of the many open garbage dumps and taught my grandchildren photography shooting these dumps even foreigners from Italy Australia America France come here to shoot these dumps they say it is Fine Art ,,

Our local representatives are like seasonal frogs you see them hear their voice during elections once they get win the coveted seat you get to see them hoisting our National flag on Independence day.Than they disappear and the poorest of the poor has to deal with their chamchas and white clothed henchman in white footwear  too..

I have become totally disillusioned with this democratic process of voting for most of these wrong guys like you I too got carried away by the Am Admi Party I saw a great opposition , values etc but than they were just a short time dream..less said the better ..

The only Man who connected to the poor , the shopkeeper the residents was late Mr Sunil Dutt and sadly  even God has stopped making leaders like him..is all I can say about Dutt Saabs heritage , I feel sorry his wifes name is associated with the dirtiest slum in this part of Bandra called the Nargis Dutt slums amount the other slums such as Rajiv Nagar Indra Nagar and Shastri Nagar ,,

So a picture sometimes is therapeutic it adds to the catharsis of the urban fucked soul of the common man of Bandra ,,

Email ThisBlogThis!Share to TwitterShare to FacebookShare to Pinterest
Labels: bandra blogs, I Shoot People Who Dont Even Know I Am Shooting Them

Muslim Man With His Wife ,,,15 Years Down The Drain 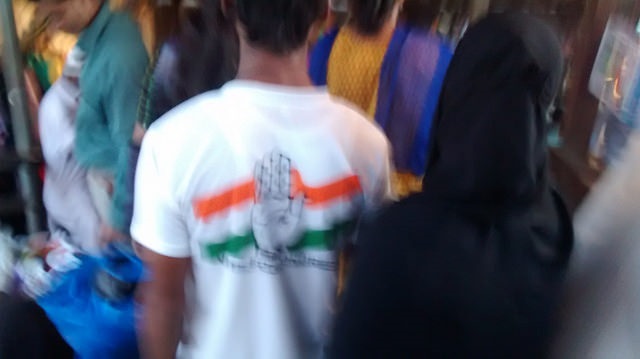 living in the ghetto
is what his life remains
his hands his future
bound in chains within
his unflinching vote
for this party he feels
the pain let down
by those he voted
to power neglected
unemployed in their
reign..rising prices
that have driven him
insane remembered
only during election
time the muslim youth
his efforts to better him
self all in vain ..driving
rickshas cabs doing
menial jobs an insult
to his indian heart
his bhartiya brain

the system in his
case is never humane

wherever he goes
a character certificate
he must obtain  tainted
for his ethnicity his religiosity
by insensitive cops he is
the first to be questioned
detained ..only during the
polls he becomes part of every
party's  election campaign..

dance of democracy without
remorse or  constrains