The Dam Madar Malang of Mumbai 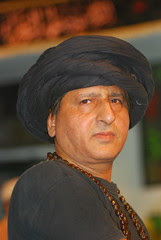 The Dam Madar Malang of Mumbai, a photo by firoze shakir photographerno1 on Flickr.
By Firoze Shakir Photographer No1 - January 02, 2012

You Will Always Be Remembered Mr Akthar Imam 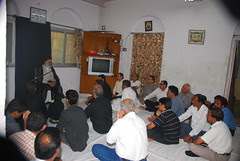 You Will Always Be Remembered Mr Akthar Imam, a photo by firoze shakir photographerno1 on Flickr.

Mr Akthar Imam is a devout Shia , influentially well connected with all the who's of who of politics and the business community of Mumbai..
Mr Akthar Imam had a Majlis at Chapel Road at his bungalow ,this was held on 1 Feb 2009 well attended by the known names in Bandra,.
The majlis was recited by the inimitable eloquentally powerful Maulana Hasnain Karari..
The high point of Mr Akthar Imam Saabs house majlis is that every community, comes to partake in the secular spirit of Peace and Brotherhood..
Sunnis rubbing shoulders with Shias ..all mutually remembering the sacrifice of Hazrat Imam Hussain ..his message that today resounds as Hussain is Humanity.. in a world that preempts tolerance and mutual coexistence..

After the Majlis niyaz was served , mouth watering Dal Ghosh, chapattis, another mutton dish, rice and a sweet dish..

This is a small series, to be at his fathers side Misam Imam ..only son of Mr Akthar Imam had flown in from the States.

Some of the pictures of me were shot by Munna photographer who stays close to Mr Akthar Imams house.

Manu Kashmiri son of Nawab Kashmiri was here with his wife..

I spent a great part of my childhood at his ancestral palatial home that was once at Jony Castle Wodehouse Road Colaba.

And this is a tribute to his sister Akthar Baji.. now settled in America.
We owe much to her and her grand mother Ammi relative of Nawab Wajid Ali Shah.

One person missing at the majlis was dear Nakkanbhai Batatwala close relative of Mr Akthar Imam..

He passed away recently.

This set is my tribute to his family .. and a memory to his departed soul.. 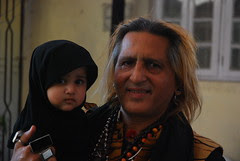 Marziya and Me, a photo by firoze shakir photographerno1 on Flickr.

Both my grand fathers were dead when I was born
I have vivid memories of my maternal grand mother under whose care I was bought up, who influenced me considerably with tales of Imam Hussain at PataNala Imliwali Gali..Lucknow ..I was born by a mid wife at her home.

My maternal grand father Daroga Nabban Saab was descendant of poet Mir Anis, he died of cholera, had two wives , one remained back in India while the other family moved away to settle in Pakistan..We lost touch with them completely..


Very close to Pata Nala was Subatiya Bagh a Sunni habitat that was the ancestral home of my paternal grandfather Bashir Hussain, who gave up everything to become a Shia. They were known as Sirkewalas or Vinegar Merchants.

My father Mohamed Shakir was a self made man , who was settled in Bombay as Mumbai was called than..his was an arranged marriage , it was to be with my mothers sister an elderly female , but he changed his mind at the last minute to marry my mother( Begum ) Shamim who was barely 14 years old , I was born in the same year of their marriage I am told.

The early years were of penury, hardships, at Kurla till my dad shifted to Wodehouse Road Colaba Bombay as a tenant of the family of the erstwhile doyen of Indian cinema Nawab Kashmiri..


This was what changed our lives completely , it was his daughter Akthar Kashmiri , (Nawab Kashmiri was already dead) ,who took charge of my education, I studied at Private European School at 5 No Post Office close to Usha Sadan, all this in the 50s
later she shifted me to Holy Name High School Convent Street....

Akthar Baji as we called her was a living diva..a goddess , very beautiful both in body and soul...a great humanitarian..her greatness is a canopy of blessings all over our heads..me my brothers and my sisters...those who were born later heard about her ..from my mother who never stopped speaking about her in noble terms.

Her brothers were Anwar bhai deceased, and Manu Kashmiri whom we called Manu Bhai...who remained in Mumbai ..

Their influence on our lives at Wodehouse Road was immense, the reading writing, thinking all came from there under the guidance of Ammi the matriarch of the Nawab household, she was the grandmother of Akthar Baji related to Wajid Ali Shah, she was from Kolkatta.


They left Colaba, we stayed behind for a year or two, than we moved to Breach Candy at Neelam Building, for a short while , till our final present parental home at 3 Mohini Mansions Colaba Strand.

I got married had took up a job in Muscat , but came back, to be in India forever , three kids we moved to Bandra permanently..

I dont know what made me give this synopsis of my life, but I am new at playing the role of a grand father , my children were lucky they had the love and care both of my parents and my wife's parents..

Marziya is in my arms through out the day, mostly every time I go to my shop I take her with me..she is well known among the kids of Bandra Bazar Road.

She is a brilliant mimic.. a great learner, most of the time she is beating her chest with a volley full of Ya Hussain and Ya Ali..

And I know as I write this her American great uncle Dr Glenn Losack MD is dying to hold her in his hands.

So being a grand father is a spiritual journey towards ones roots, reliving your children s childhood all over again, as I was an alcoholic while my children grew , this birth of Marziya has been a blessing in disguise and a retribution to of my irresponsible past..

Marziya is my restless souls homecoming..

A reminder of my mortality so to speak.

Coming to terms with the soiled tears of my spirituality.. the pilgrims progress towards an onward journey into the nether world.

Special Menu, a photo by firoze shakir photographerno1 on Flickr.
By Firoze Shakir Photographer No1 - January 02, 2012