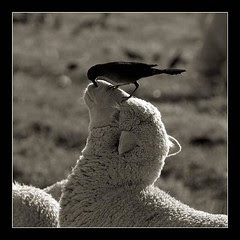 I recieved this picture as an email attachment but the photographer who shot this has captured time and arrested a human emotion,there is so much to be read that my words unecessarily sound redundant .
Man is Gods finest mistake and God gave man qualities that he did not give animals, he made a thinking man, yes a sinking man a drinking man , to his environment not a linking man, a stinking man, hate filled waking tall but alas a shrinking man.