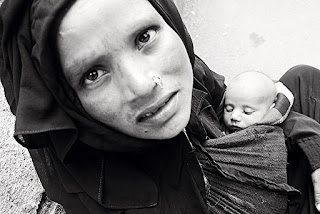 The street in the head of the photographer he picks up a subject and adds it to the street in his head .. pictures are not merely born through the camera they are cosmically born through the Third Eye Of Shiva that may be half awake or half asleep.. and it will only shoot those pictures that it was destined to shoot ,, photography is humility and simplicity combined .. I dont get intimidated by fancy cameras glitzy super lenses , I can create miracles through my HTC Desire 826 ,, but everyone needs a good camera and good cameras mean a lot of money beggar poets cant be choosers,, so a camera in the hand is better than two in the bush.

I was in town much before I shot this Muslim beggar child 1 month old begging in a street near my house ..the beggar child beckoned me I shot a few frames,, mind you I dont stalk beggars but beggars know intuitively that I wont just shoot a picture I will shoot their story too,, photography to those laid back camera club photographers ,,who think it is a print to be judged awarded .. Sorry shooting pictures is the highest form of story telling .. the camera is the quintessential storyteller ,,
Only dickheads see pictures as prints and bigger dickheads  judge them as pictures ..

I have distanced myself from so called fine art fucked photography that poses as gaudy plasticky prints .

Strange thing either you have Shivas third eye or you dont ,, you dont get it with the camera you buy , its built in your inner consciousness and you got to wake it up with your tantric kundalini.

So perhaps as a photographer once a camera club product I now shoot shit garbage on the streets and if I did post this picture for a  camera club competition it would be 3 Fucked R ,, rejected by all 3 pompous pedantic fine art photographers ,,and this is the funny part of camera club photography too many judges and far few participants and all this is coming out of my system as I saw the judging of prints at my Photography alma mater and I looked up at the wall into the eyes of Mitter Bedi , Unwala , Bhardwaj Maheshwari  Jatkar and realized their pain and agony ,,yes photography as a cosmic art is million light years away from decadent demoralized mindset of the satraps of such institutions blind mice following a blind master with a camera that has a eternal lens cap on it forever .

With malice to none ,,

Email ThisBlogThis!Share to TwitterShare to FacebookShare to Pinterest
Labels: And Fuck What Is Street Photography, third eye of shiva, What Is Photography
Newer Posts Older Posts Home
Subscribe to: Posts (Atom)