The Muslim Man ..And A Message To The Wrong Number 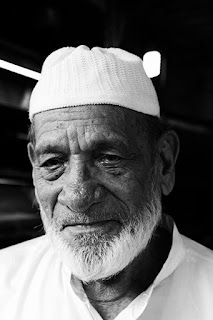 There are some unique faces God bestowed on the Muslim Community , he can be a Sunni Shia or Sufi Malang .

Most of the older Muslim people get an added glow on their face their namaz , their good deeds humanity adds to their body language and their humility ,,

I prefer shooting simple humble Muslim folks I add them to my blogs , I artistically change their inner angst without photo shopping ..never liked photoshop ,,

I met this gentleman at Kurla East ..and I took this shot ..I tried to read his mind try to find out what he was thinking while I shot him..I will make his thoughts privy but a lot of people Muslims dont like their pictures being taken..and there are a lot of Muslims I would never shoot ,, for more reasons than one ,..

Today I met a guys father his son Shabaz had died recently ,, I had met him at Lilavati when his son was admitted for a serious accident ,, and I was meeting him now after a gap of few days ,,I offered my condolences but I could not hold back a few words , I felt sad for a young life being cut short , but I blame Muslim parents too, he had bought his son a bike recently and he was regretting the gift.. The problem on Mumbai streets you can be a good driver or biker is the person driving into you good enough.

Most Miya kids love to zoom on their bikes do crazy stunts and lack of parental guidance is their undoing ....And as I am depressed with my gall bladder stone I sent a message to my estranged daughter in Delhi.. on both her numbers .. Your Father is Dying ,, and one of the numbers blew me up as it belonged to someone ele ,,I did not know my daughter had changed the number ,,,This can happen to anyone of us ,,
I apologized to the lady but she kept firing me non stop.. she thought her father was dying.

Email ThisBlogThis!Share to TwitterShare to FacebookShare to Pinterest
Labels: The Muslim Man ..And A Message To The Wrong Number.

I Shoot Him Every Time I Come To Kurla East 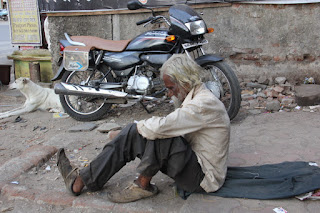 It is fucked heartless society
that turns man into beast
on his carrion they feast
acche din wont bring his
good days back last
but not the least ,,from
this dreadful deathly
existence he seeks
cosmic release ,
his soul mortgaged
his withering body
on lease ,,humanity
died a million times
at the hands of the
high priest ,,,
By Firoze Shakir Photographer No1 - May 19, 2015

Email ThisBlogThis!Share to TwitterShare to FacebookShare to Pinterest
Labels: I Shoot Him Every Time I Come To Kurla East
Newer Posts Older Posts Home
Subscribe to: Posts (Atom)