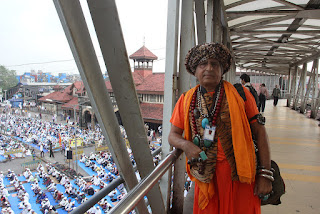 All these frames were shot by a friendly photo journalist , most of them are endearing as they were as close to late Mr Anil Bhratiya as I was / he was a great fine art and press photographer an astute teacher and it was here at the Eid Namaz you would find him shooting pictures low profile and reticent .

He only talked to people he knew as I was a life member of his photography club NAPP  and had gone out with him on several outings he was very close to me ,,encouraging me guiding me and always ready to help.

This is one of the finest place for Eid Namaz photography . you can shoot from the skywalk provided you have a press card or from ground level down below ,, first time the cops were asking for identification even from senior photo journalists ,, and if the cops are new on the beat even God cant help you .. 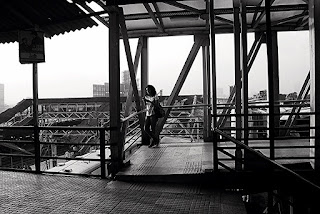 Whats The Matter With Saudi Arabia ,,Have They Lost It 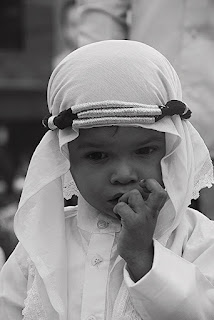 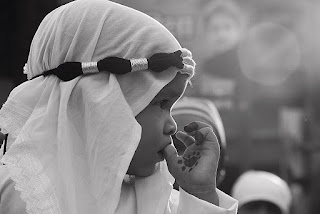 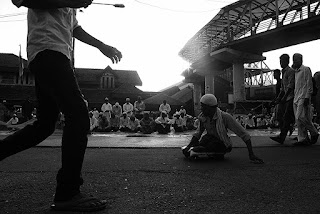 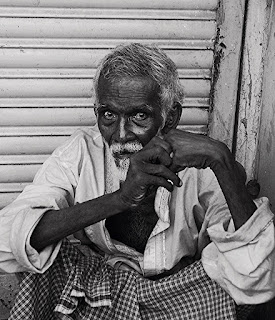 I shot him many years back on Eid ,, Bakra Eid and I was fascinated by blood gore , I shot goat bull Kurbani ,,,I also shot the goat kurbani in the slums ,, but this year my taste for shooting blood and gore has subsided ,, After I came back shooting the Eid Al Adha Namaz 2015 at Bandra Station I requested the owner of Mastan the Wise Goat of Bandra Bazar Road to call me as soon as Mastan was to be slaughtered , Mastan is a huge white Andu goat , a very horny goat and no pun intended ,,I shot Mastans video on You Tube a few months back , he was fed pista , kaju and the best of dry fruits pampered by the owner , who treated him like his only child ,, and I used to wonder how he would feel when the time came for Mastan to be slaughtered ,
I was uploading my Eid Namaz pictures and after a lunch of chickn biryani and Lucknowi flat kebabs I fell asleep .. till my wife woke me up that guys had come to inform me that Mastan was going to be slaughtered so I got ready to go and shoot the Last Moments of Mastan .. I took my granddaughter Marziya Shakir she has been shooting Kurbani since the age of 3.. so blood does not really scare her as such.
Mastan died terribly as the Maulana who was to give the Sala the first stroke could not handle this huge goat despite half a dozen guys holding it and the Maulana had got a knife that must have lost its razors edge ,,Maulanas here in Bandra make extra bucks doing the Salla plus they take the skin too..
I shot two videos and Mastan after the first bad stroke was not willing to die ,,this is my Bakra Eid Kurbani rendition.. two video and some stills will post after I finish the storyboard of my Eid Namaz , documentary..
Many years back I shot a Kurbani of a red and white Goat Jimba ,, it was Marziyas favorite pet it was under the care of Mohomed Ali the owner of Mastan but was slaughtered by his brother in the Indraji Nagar slums ,, and it was one very sad story of his slaughter I shot in pictures ,, even Jimba did not die easily looking deep into my eyes searching desperately for Marziya in the crowds ,,
And when I reached home I told Marziya she was 3 year old that Jimba was no more all Marziya did mystically put her hand on her throat indicating that Jimba was slaughtered ,, so I took Marziya now 7 year old to show her the Kurbani of Mastan.. not an easy visual too see feel or experience ,, 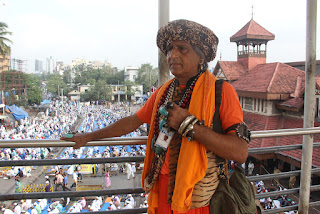 I left home early , to shoot the Eid Al Adha Namaz at Bandra Station paying respect to the garbage littered on the roads paying respect to the Bandra Police and their excellent Bandobast..I also paid respect to the few goats that looked at me enviously , waiting in a transit lounge hoping to catch the next flight to the Maker ,,..with a little help from the local butcher the only person in most demand in Bandra today tomorrow and day-after ..;lol

I walked to the Bandra station via the Skywalk as I was early I met ACP Sanjay Kadam sab the only police officer who is trim and fit not an inch extra on his body , we have known each other since a long time ,,when he and Mr Ahmed Javed Sab policed Girgaum Chopatty during the Ganesh visarjan almost 15 years back or more ,,much before Ahmed Javed Sab  became the  current CP of Mumbai Police .

The police were not allowing us to shoot from the skywalk but than they relented knowing that we were serious photographers and there were senior photo journalists too.

I shot less unlike past eids but   I did shoot a video.. after the Namaz I was surprised there were very few beggars I cut across Shastri Nagar slums and Bandra Slaughter house compound ,,

Before I reached home I told Mohomed Ali Bhai the owner of Mastan the wise goat to call me when he slaughters Mastan.. I have been very close to Mastan.. I want to shoot his last video before he shuts his eyes ,, appeasing the soul of Humanity ,

This is a long series ,, my new series at Flickr.com

Happy Eid Al Adha from the Beggar Poet of Bandra ..
By Firoze Shakir Photographer No1 - September 25, 2015 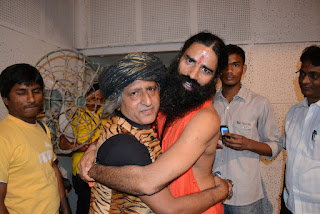 Eid Hugging Pictures of the Press We Can Do Without 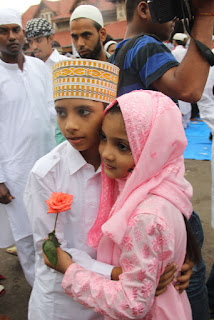 actually for our press photographers
this is what eid is all about ,,eid
hugging kids sweet fat and stout
a fancy fez a fancy skull cap a rose
in the hand creating a fancy cut out '
fathers pushing their kids to forcibly
hug.. next morning papers neighbors
envy our son is in the papers mothers
will shout is this what eid is all about '
will the imam who leads the namaz
talk about the farmer suicides the
devastating drought ,,,will the mosques '
give all the money to the farmers families '
i wont doubt ,, this is what our eid is about
helping the needy the oppressed victims
of natures fury ,,who fill our bellies today
totally wiped out ..a message to all muslims
enormously devout ,,please for once help out
' 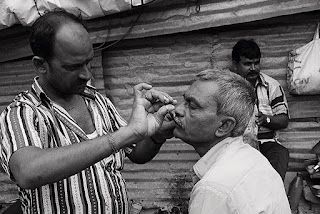 I have been shooting the  street barbers of Bandra Reclamation for almost  8 years now , there are four , one from Bihar the rest from UP..And they earn their bread from the sweat of their brow ,,

Their main clients are the poor slum dwellers , hawkers and most of the ricksha drivers and they are always busy, sometimes they undertake Mundan religious tonsure of the Hindus and Akika of the Muslims .

I dont know if they to circumcision of Muslim boys but most of these barbers known as Hajam offer their services for the same .

They respect me a lot and I shoot them when I go to catch a bus for town ,, and this was shot on the day I was going to Regal to meet my French friend Laurent Salesse .

All these barber images are part of my Barbers .. Barberism set ..at Flickr ,,