I shoot all religions with a devout passion, showing the human side of mans godly nature.I am not here to proseylitize any religious ritual traditions or beliefs .I remember when I began posting pictures here at Flickrs from 10 June 2007 , I took offense easily when someone adversely criticised my Shia images , I gave vent as I do not go to peoples photo stream and bash and bully them for what they post.
I too am a member like all others who have paid and taken a pro membership, so it really hurt the Shia bashing by bigots of fanatical stream of Islam.
I am not a Mullah , but I cannot and will not deny my birthright as an Indian Shia Muslim.
So as I begin this new series I request you that please see and read them as an aspect of photo journalism.If any adverse comment is placed here I will simply delete it.I have no time to argue , or to get into unnecessary dialogue with any Flickr member including those that are racists and who have taken shelter at Flickr from my earlier poetry website..
Try not to make a monkey out of me..

Well the Moharam moon has not yet been sighted .
I was at Bhendi Bazar and Dongri the citadels of Shia Islamic belief and thoughts , the areas within the vicinity of Moghul Masjid and the areas next to the Dagah of Hazrat Abbas at Dongri, Dongri is the bastion of the Shia Ashneshri Khojas or Twelvers.Close to Harzrat Abbas Dargah is Kaiser Bagh, when from 7th Moharam till 9th Moharam the scourgings, flagellations majlis and matam will begin in great Shia intensity.
Kaiser Bagh is a sight to see , with the inhouse processions the weepings at the Majlis all commemorating the Martyrdom of Hazrat Imam Hussain the beloved grandson of the Holy Prophet.
As I write this families have begun removing their black clothes from the trunks and cupboards, the House Imambara is being decorated.And my grand daughter Marziya Shakir only one month and 15 days will wear the Hijab known as the Maknah and make her public appearance at the Majlis for ladis at Bandra Khojah Mosque and at the Bandra Mehfil.This is the inherent power of Ya Hussain.It binds all believers of Ahle Bait.This will be Marziya Shakirs first Moharam..She will wear only black like me and the rest of my family for 2 months eight days.
Normally I would leave Mumbai each year and shoot Moharam in a different city, but my intentions are misinterpreted by bigots in my own Shia community , those fanatics who hate Azadari and rituals connected with Shiasm, this dangerous stream of thought propagated by a group called Shia Wahhabis.
So I will most probably be in Mumbai.
I am not a congregational person, so I dont go to the discourses at the local Mosque and Imambara.
Bhendi Bazar is the place where all Shias gather and bond, most of the Shias leave for their hometowns to savour the ancestral form of their home Azadari.
That is why when they return after Ashura you find that the Chehlum or Arbaeen or 40 th Day of Moharam is more definite and more populous than the Ashura procession
On 9th of Moharam try not to miss the Savoy Juloos that starts from Byculla Honda Chambers and moves towards Bhendi Bazar to Moghul Masjid ending at Fotawat and Amin Imambara.On Ashura the Amin Imambara has the passion play that depicts the scenes of humilation and carnage perpetrated on Imam Hussains family by Shimr commander in chief of Yazid the premier terrorist of Islam of the Ummayad Caliphate .Amin Imambara is a Iranian organised event , and the scourgings and the forehead cutting and the sword Matam unseen anywhere else.
After the event the Iranians break the Ashura fast and everyone is served Khichda.
The Hindustani Shias break the fast at 5 pm at Imamiya Sabil and than the Ashur procession begins from J J Hospital Junction, with huge Alams , Zaris , and scourging by the various Anjumans till it reaches Rehmatabad cemetery where Maulana Athar Sahab recites the Sham e Ghariba.Incidentally last evening there was celebrations on Maulana Athar Sahab completing 50 years of recIting Majlis at Moghul Masjid.
At Bhendi Bazar work was going on of building the water holes called Sabils..
Yes the Shias of Mumbai the locals and the migrants the sacrifice of Late Maulana Abbas Rizvi Saab and his companions have made Moharam the Mumbaikar Manoos s most important feast quintessentially mournful in nature pervading a sense of piety , charity and penance...

In the words of Khwajah Gharib Nawaz

All my entire Moharam pictures that I have shot since about 6 years are all at Flickr
some at my home site , and at my Shia site..Shah ast Hussain 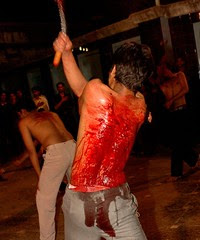 Marziya and the God of all Colors

dedicated to ppc who has morphed Marziya and Grand fathers picture with Goddess Durga.. The primal force

into the cobwebbed
dark recesses of your
darkened soul he peeps
cursing the travesty of his gender
a mockery of his androgynous angst
he weeps
from one tangible hurting moment
to another more hurting emotion
he leaps ..dark shadows
of his human betrayal
on his karmic silence creep
the hijda never sleeps
unsown pain as painful
pleasure he reaps