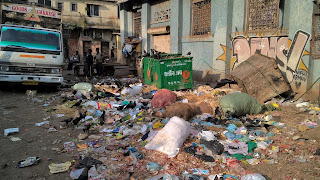 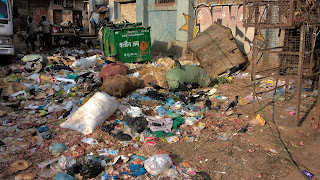 There is is no CC Tv here no security guard , who could catch and instantly punish the offenders with hefty fines ,,, frankly the Bandra Municipality does not care nor does our only Congress Corporator , he hardly comes this end ,, I have nothing against him but we voted for him we need to see that he addresses our problems to the satisfaction of all concerned , And honestly the Congress party does not care about Bandra they once did during the times of late Mr Sunil Dutt .


So every morning I take pictures and I have been shooting garbage since more than 5 years or more .. even the Municipal Conservancy staff are tired of this garbage site , the stink the filth and I think you can blame them for bunking from work as filthy as this .. suspending the Municipal conservancy staff is an understatement , all the Municipal think tanks and guys in charge of garbage disposal should be sacked not suspended for destroying our beloved Amchi Mumbai.

And I can assure you in totaly sincerity you will not find such a glaring sire at Bandra Kala Nagar near Matoshree Bandra  East , you wont find this at Pali Hill  Band Stand or Carter Road ,,As a senior citizen not affiliated to any political party , as a man who shoots pictures I have captured this all with no hidden agenda , I simply want to show the crass and empty hyperbole called Swach Bharat that is in deathly state of inertia at Bandra Bazar Road .

When will the Bandra Municipality get serious the day they hire security here and fine the litterbugs this place will be back to normalcy. 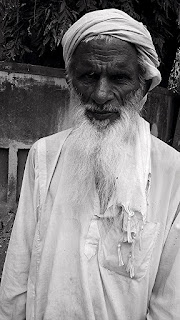 We became friends recently after I shot his pictures and a video , and he let me into a secret , that he was waiting for June when he will take a long break to visit his family in his native place in Uttar Pradesh..
Like a little child he is counting days and I meet him every morning when I come for my walk at MET Cricket grounds , he is aware of my health problems so first think he will inquire of the same .

These are poor migrants , they dont want the full sky just a fistful of happiness , he is 75 plus , I told him he should retire , but he replied he needs to work or he will lose all interest in life ,, and mind you he is a devout Muslim ..for what he is , and for his business he simply thanks Allah..Most of his clients are Maharshtrians , Hindus , and he respects them , always has a kind word ,, I stay at the Bazar but now even I buy my bananas from him..

I still cant remember his name , but that hardly matters to him or to me , and when I take out my mobile phone to shoot me , he looks into my soul and his humility connects with my own.. my father was a migrant too.. he is struggling but he hides his pain from me , with a beatific smile , but I read his thoughts ,,and honestly I would not want to live as long as him..I have lived long enough , I have exhausted my lifeline ,, and I am not a hypochondriac I shoot life I shoot death .. and I am hanging in between,..I just want to get away from this planet ,soon so I pray to God to help complete some of my commitments and out standings .He can do this in a second or even a minute or he may not do it at all. and I will certainly not hold it against him.. so in short photography is not just shooting a picture but shooting a part of me too.. through the banana seller his story hangs my own story.. I dont give charity for charity's sake and I am a beggar too so I understand the beggarly survival of the poorest of poor man.

I shoot Dickensian characters ,they become part of my Human Comedy , and I have shot the same person for many years , and seen the change and the only glaring change they are still sitting by the roadside begging ..And there are dear beggar friends who ask me quizzically ..do people see our pictures ..I tell them yes .. and positively too ,, Maria the leper lady had returned I never got to shoot her and she must have left as the monsoons are harmful, he body parts start falling .. and so she might come back in winter .. in time for Christmas .

I knew a friend wealthy rich lived at Cuffe Parade , got hooked to brown sugar , he was older than us , highly educated with a Danish wife , and he became a beggar , I would see him at Fort he would call out my name and like a coward I would run , I knew he would ask me for money to buy drugs , and more than that seeing him like this shabby holding his loose pants with one hand ,, I was too ashamed to meet him .. I have not seen him for 20 years now or more and I pray to God he finds peace wherever he is ,, I have a lot of stories ..as I am not a writer I type with one stumbling finger I try to shoot them in a single frame ,,I add text sometimes but most of my 309,670 photos at Flickr  private public are wordless ..no text .

As my target audience is on cyber space , some faces, some faceless , nameless I succumb to writing some detail on my pictures , my pictures will always have a title ,,and will always be part of my sets , over 700 sets at Flickr ,,Street Photography , Poetry , Shiasm , Hinduism Sufism , Christianity .. but all part of street photography , street life street angst .. my world is a street ...bitter and sweet , where hope hovers to converge on Misery but they never meet ..I shoot empty eyes empty stomachs ,, who really cares what they eat.. their miserable cosmic fate they could never cheat ,,, death with open arms moves away from them...he too is despondent in defeat  ..with a blindfold on his eyes hungrily searching ..for living souls .. running around barefeet .

Email ThisBlogThis!Share to TwitterShare to FacebookShare to Pinterest
Labels: Street Stories Of Another Kind - Banana Seller