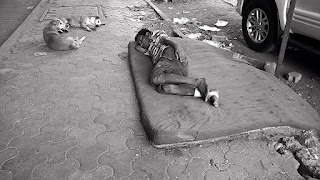 Its only in Bandra if you are homeless destitute or a drugaddict you can live life King Size ,,even the cops who sit a few feet away wont bother him.. frankly most cops bother only those people that have deep pockets ,,I recently saw near New Talkies a traffic cop abusing a senior respectable rickshawala and than with due respect to the cop  I wondered why  cops are under so much stress unlike the Delhi cop he did not pick up a brick to hit the rickshawala.

This blog is about street dwellers so I shall leave aside police and police reforms ,, a lot of cops need to be reformed before police reforms ,, internally and externally ,,,in their attitude towards the common man .. not all common men are criminals ,,

I have been shooting this stretch of Bandra Hill road and I am left wondering why do drugaddicts prefer this stretch to sleep and dream ..they are always there along with these stray dogs

These are my street blogs collectively as a tag called Bandra Blogs ,,shot on my Lumia 640 .. this was shot last evening .. but today I shot another man sprawled on the pavement at St Peter Road I decided to shoot his video.. I said to myself why not extend my street photography as a video... I kept my voice mute ,,and shot him dreaming of Modijis Achhe Din.. 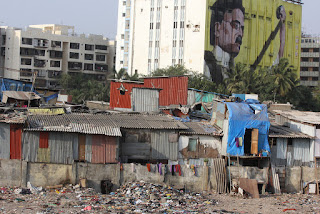 A slum named after Mother India Ms Nargis Dutt ,a slum synonymous with urban ugliness chaos and regular demolitions ,..I shudder to think what Ms Nargis Dutt goes through ,,writhing in her grave as you pass by this slum , a garbage dump , children defecating on the streets , the pallor of failed poetry of life , fulsome fetid and always a vote bank , created by the Congress they say once upon a time ,,now barring a disinterested civic presence it is basically Bandra free of Congress totally utterly decimated first time in its political history ,,,

As this is a street blog and has no political plank , Nargis Dutt Nagar if the earlier Congress satraps wanted could have been a model slum , clean ,pristine but that was never to be , now sadly it is known for the wrong reasons ,I shoot it every time my cab or bus passes that way. I feel sad as humanity lives here in one of the most expensive real estate , but the way the way they live , even God would never want to live here ,, no effort has been made to rehabilitate it positively ,, touch or heal it ,, but everyone has politically made gains from the naivete of the denizens here ,,

People used to once call it mini Bhendi Bazar but Bhendi Bazar in a few years will have Manhattan skyline with towers zooming into the clouds,,,while Nargis Dutt Nagar is slums rising high like a pack of cards , already survived a major fire ,,it stands on a timeless quicksand .
By Firoze Shakir Photographer No1 - May 16, 2015

I Curse Society More Than The Butcher .. He Kills Me With One Stroke .. They Kill Me Everyday 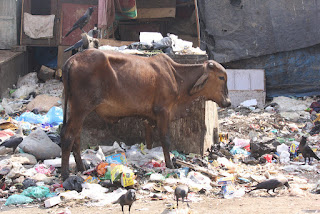