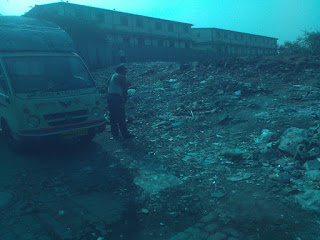 Early morning all the migrant rickshawalas , hawkers  folks from the adjoining slums come to shit and pee here on this Mound ,,

There is a steady line of people making a bee line to this eponymous location at Bandra Reclamation.. They could lay a foundation stone here and build a few blocks of toilets as there is hardly any public toilet on this stretch..

At Lal Mitti open grounds too you find people defecating and we want to beautify areas in Bandra that are already famous ,, Band Stand Bandra Station Bandra Talao.. the political TRP is greater in those areas than Bandra Bazar Or Bandra Reclamation.

Our constituency a new BJP Stronghold needs a holistic healing touch. I think as a concerned senior citizen and lover of all things Bandra .

And mothers with children going to school in the mornings have to see this embarrassment every day..
By Firoze Shakir Photographer No1 - May 05, 2015

Mastan - The Wise Goat Of Bandra

Mastan - The Wise Goat Of Bandra 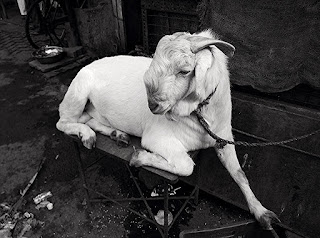 Mastan is the most famous goat in Bandra Bazar Road .

He has been with the owner since he was born from one of the goats in his large collection .

Mastan is a pampered goat , he gets to eat cashew nuts , dry fruits and the best delicacies , his head is massaged with Navratan oil .. he does not roam around like the other goats that you will find on the iconic garbage site .

Many people have come to buy Mastan . they offered Rs 24000 but the owner refuses to sell it ,, He will be sacrificed this Bakra Eid .. and he tells me that he will cook the meat and give it to the poor the sick and the incurable ,, he says that the flesh of Mastan will be holistic after the Qurbani or Sacrifice ,,

And Mastan is very angry as he is on heat and his owner does not allow him that freedom because of the holistic attribute attached to this beautiful goat.

Mastan is a Andu he has testicles so his urine stinks and produces fleas that his owner removes patiently with his hands ..like a mother dotingly removes fleas from her daughters hair.

There is black namak or salt that Mastan licks to keep his metabolism in order ..And after you have read this I will add the link of the video I shot of Mastan and his owner .

Email ThisBlogThis!Share to TwitterShare to FacebookShare to Pinterest
Labels: Mastan - The Wise Goat Of Bandra

The Story Of Slums 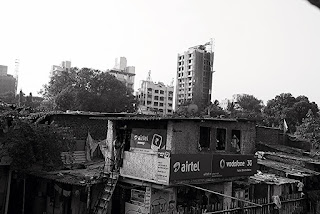 I started a set on Flickr called Slumbai - Mumbai, and it was my favorite set in memory of my father who lived in the Kurla slums in an area called Bakhar early 50s . This slum was on the fringes of a Hindu crematorium and my mother who had come here to live with my dad I was a year old my mom 15 year old , had many stories to tell.. I was born in Lucknow at my grandfather Daroga Nabban Saabs house Imliwali Gali Thwai Tola  Kankar Kua Pata Nala.

Living in Old Lucknow , daughter of Daroga Nabban Saab she must have been shocked at her change of fate and fortune ,, she visited this slum all her life kept in touch with the people who had helped her , all her life .. She never forgot the slums even after moving to Khatau Bhuvan Wodehouse Road s..that later become the iconic Jony Castle ..we were tenants of the children of Late Nawab Kashmiri the only actor in Indian cinema to remove his teeth to act as an old man in a film.

Whatever I am today, my education upbringing I owe to Akhtar Baji and Munawar Kashmiri.. It wa Akhtar Bahi who enrolled me in Private European School of Mrs E Lester . and her sister Miss Marjorie Miss June ,

After Private European School she enrolled me at Holy Name High School and tutored me and was one strict disciplinarian  My mother Shamim was very close to Akthar Baji and my dad those days worked at N Swamy Rao .. After the Kashimiris sold their flats , the building was bought by Mr Matthews , who let us stay at  Neelam Building Breach Candy for a few months till we got our next house at Strand Cinema Mohini Mansions ,,..

My mother continued taking me to the Kurla slums keeping me connected to  her roots .. the Imambara her Shia friends .

So till date I could never forget the slums I shot slums dwellings on the roads at Mahim , Byculla that were bustling human colonies and one day the tractors came and nothing remained ..This was the saddest part.. I shot the aftermath of the Fire at Behrampada , Garib Nagar though I avoid shooting disasters I could never imagine shooting a disaster and watching the plight of the people without helping them.

I shot the rebuilding of the slums after the fire I saw how vested political adherents made use of this disaster to rob the poor poor usurp homes and all under the Congress Rule .

I live next to a prime slum but I made sure my grandkids saw how people lived , the tution classes in the slums and made them shoot the kids out there .

I still visit the slums because of my work both at Maharashtra Nagar Bandra East and Bandra Slaughter House slums shoot the people life and hope ,, sadly Muslim slums are mostly vote banks and some some slums like Nargis Dutt Nagar Lal Mitti ..have become home for drugaddicts and history sheeters.

Muslim slums are dirty filthy and I shudder to think what  late Ms Nargis Dutt must be going through her name synonymous with the dirtiest filthiest slum in all of Bandra ..and it did not matter to Ms Priya Dutt or Mr Sanjay Dutt ,, this slum is always in the news for illegal construction and regular demolitions since the BJP came to power ..

So now you know why I shoot slums , slum dog caterers who became rich overnight cooking catering for weddings in the slums .

Most of the tailoring , embroidery workshops are in the slums more in Bandra East and some in Bandra West .

The other notorious slum for drugaddicts and anti social elements is the slums of Shastri Nagar perched on the tracks close to the Bandra Station West.

I shoot the Qurbani in the slums  poor peoples weddings with hijra performers , Circumcision ceremonies and life in the slums .

Will it change ,, I hardly think so.

Ps those that lived in slums and get flats in buildings under the slum rehabilitation scheme make their flats into slums too..

Email ThisBlogThis!Share to TwitterShare to FacebookShare to Pinterest
Labels: slums

The Only Lady Chaiwali Of Bandra Reclamation Anandiben Daya 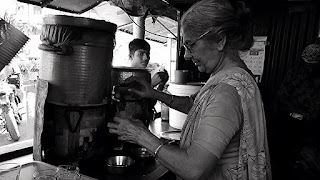 Let me introduce you  to the only Chaiwali of Bandra Reclamation Ms Anandiben Daya ,, originally her forefathers were from Rajasthan.

She comes to her tea stall at 4 am an hours rest in the afternoon and she packs up at 11.30 pm.. her clientele pre dominantly are rickshawalas  migrants from UP .. they all call her Mummy ,

In her tea stall is the auspicious picture of the  Dargah of Moinuddin Chishty .. Garib Nawaz ,, this picture blesses her , her husband son and grandson.

She is a Hindu , but that does not matter ,. she says we are all one ,, and we have the same blood ,, most of her clients the te a drinkers are Muslims ,, and they need the utara of her tea first thing in the morning when they emerge from their night long sleep in the rickshas.

I interviewed her this morning on my mobile phone ,, but before I go further I request you to try her tea it is homemade nicely brewed and exhilarating ,

She is the only lady tea seller at Bandra Reclamation off Lal Mitti..

Email ThisBlogThis!Share to TwitterShare to FacebookShare to Pinterest
Labels: The Only Lady Chaiwali Of Bandra Reclamation Anandiben Daya

The Beggars of Bandra Bazar Road