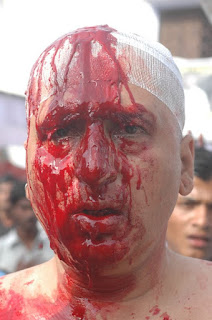 Jo Haqq ki hifazat ke liye kaam na aaye
Those that are not utilized for the protection of rights
Mazloomon ko kamzoron ko  nahaq jo daraye
Rather they are used to tyrannize the oppressed and the weak
Shamsheer o Sinan o Tabar o Teer pe laanat
May God curse such swords, spears, shields and arrows

Iblis ho Firaun ho ya Aale Umayyah
Be it Satan or the Pharoah or the Family of Umayyah
Shabbir ka dushman hai jo hai dushman Khuda ka
He is an enemy of God who is an enemy towards Imam Husain (a.s.)
Har daur ke Dushmane Shabbir par laanat
May God curse the enemies of Imam Husain (a.s.) of every era

Awlaade Umayyah ho ke ho woh Banu Abbas
Be it the children of Umayyah or Bani Abbas
Ho na Aale Mohammad ka jinko Adab o Paas
Whosoever does not pay their due respects to the family of Holy Prophet (s.a.w.a.)
Us Fikr per, Us Khoon per, Us Sheer per laanat
May God curse that school of thought, that blood and that milk.


Posted this at Ello ,, after someone reposted my photo blog

As many may not know and as it is not part of their culture , about this self infliction ritual of the Shias .I am one of the many .. we mourn for Imam Hussain the grandson of the Holy Prophet who was brutally murdered along with his family deprived of water food heads decapitated and were treated viciously even after death .. so that Yazid the supreme powerful tyrant could usurp their spiritual power of the first family of the Holy Prophet .. so for 2 month eight days akin to Holy Lent we remember their sacrifice , some beat their chests scourge their backs others cut their heads like me .. this is the longest 14000 year proest against a warlord Yazid ,,

And now as an educated Muslim , I have been bought up in a European school in Mumbaii , studied in Methodist and Roman Catholic and Jesuit institutions I have the greeatest respect for all religiosity fath as seen in my pictures ,,

But sadly and nobody wants to and will never acknowledge that Terrorism has existed in Islam , Arabs were barbarians many still are , we got a gift of Islam that was Peace Brotherhood , but our Imam Ali the cousin of the Holy Prophet was killed in a mosque , his son Imam Hussain was murdered , the resulting genocide its all their part of our Islam History ,, I as a Muslim distance myself from  such murderers rapists arsonists the ISIS the Talibans Boko Harams they have misplaced martyrdom and Islam too..We Shias even today are bombed killed but we talk of Peace even after our death .

This disclaimer is for those foreign friends I have on Ello.
Whatever you belief caste or creed only read me as a photographer even through the blood on my bleeding face ,, I had cut my head with a sword I do it every year during Moharam AShura and Chehlum .

This was posted as a protest of Shias bombed in a Saudi mosque ,,,thanks 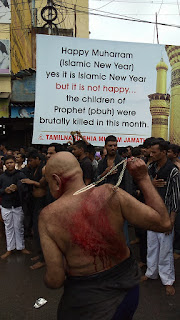 My entire series on Shiasm Moharam is housed at Flickr ..

I hardly shoot in Mumbai I prefer to shoot either in Lucknow Hyderabad ..

I chose a city that has kamazani zanjir zani as I do my kama matam too .

My Moharam script is blood and gore ... and my Karbala is India ..

Every place is Karbala every day is Ashura﻿

Email ThisBlogThis!Share to TwitterShare to FacebookShare to Pinterest
Labels: shiasm, shiasm in india 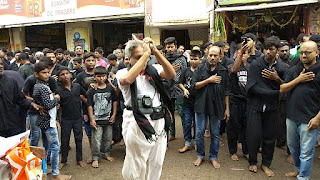 Posted at you tube community tab..


I had shot Moharam  Ashura in Chennai 2010...met the humble Shias of Chennai created a bond with Mir Ashfaque and Mis Meesaq and others ..this was my first visit to Chennai during Moharam I had come earlier years back for styling costumes of mega star Chiranjeevi in a Sridevi starrer.

Then in 2017 I decided to document Ashura Moharam in Chennai again and Mir Ashfaque and Mir Meesaq who have a palatial building Imambara at Royapetttah invited me to stay at their Imambara .
Highly hospitable and caring the just the Shias but also our Sunni brethren and the Hindus of Chennai .

The Sunnis Shias live in peace and  this is what is important despite our ideological differences .

I shot the 7 Moharam Juloos and than the main procession Ashura Shahadat that  ends finally at 1000 Light Mosque .

I did my kama matam on the streets of Chennai..this is my personal protest against Yazidiyat ..it is my act ..and it is my head that bleeds ,.. good or bad in your perception does not bother me .


I have been doing it in every city I have shot Ashura and Chehlum....

I returned back to Mumbai but I have beautiful thoughts of the kind people of Chennai ,,, and I have a large number of Tamil friends in Mumbai I shoot their Marriammen Feast ..and am treated like a brother by all of them.

This is the beauty of India .. it touches us all this feeling is applicable to those who were born here and live here .


Mahatma Gandhi: (Father of the Nation - India)
“I learnt from Hussain how to achieve victory while being oppressed.”
"My faith is that the progress of Islam does not depend on the use of sword by its believers, but the result of the supreme sacrifice of Hussain.”
“If India wants to be a successful country, it must follow in the footsteps of Imam Hussain.
“If I had an army like the 72 soldiers of Hussain, I would have won freedom for India in 24 hours.”


Pandit Jawaharlal Nehru: India’s 1st Prime Minister
"Imam Hussain's sacrifice is for all groups and communities, an example of the path of righteousness."


Josh Malihabadi (Shaayar-e-Inqilaab or The Revolutionary Poet)
“Insaan ko bedaar to ho lene do,
har qaum pukaraygi hamare hain Hussain”
(Let humanity awakens and every tribe will claim Hussain as their own.)


Maulana Mohammad Ali Jauhar (Pioneer of the Khilafat Movement and a dauntless fighter in the struggle of independence)
“Qatl-e-Hussain asl main marg-e-Yazid hai,
Islam zindaa hota hai har Karbala ke baad”
(In the murder of Hussain, lies the death of Yazid, for Islam resurrects after every Karbala).


Charles Dickens (English novelist)
“If Husain had fought to quench his worldly desires…then I do not understand why his sister, wife, and children accompanied him. It stands to reason therefore, that he sacrificed purely for Islam.”


Swami Shankaracharya (Hindu Religious Priest)
"It is Hussain's sacrifice that has kept Islam alive or else in this world there would be no one left to take Islam's name."

Dr. Rajendra Prasad (1st President of India)
"The sacrifice of Imam Hussain is not limited to one country, or nation, but it is the hereditary state of the brotherhood of all mankind."


Sarojini Naidu (Great India Poetess titled Nightingale of India)
"I congratulate Muslims that from among them, Hussain, a great human being was born, who is reverted and honored totally by all communities."﻿