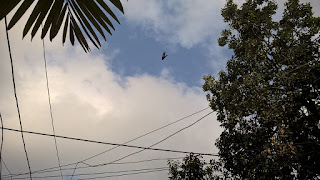 This morning after completing my walk at MET Gardens Bandra I decided to walk home through Chapel Road ,, and the Fire Brigade was having a tough time entering the narrow lane , so the fireman moved in and there was this crow helplessly hanging upside down from a tree caught in a manja thread , he could not release himself and other crows were attacking him and I believe some kind lady had informed the Fire Dept .
The firemen all young guys , took a pole and attaching other poles to it tried to remove the thread entangling the crows leg.. , but it was utterly impossible than another fireman passed the pole to his colleague who climbed up the house of Akthar Imam sab and with great difficulty managed to save the crow who happily flew away to freedom.. I shot some frames and this short story I thanked the firemen .. and told them that I was ashamed that our society , our government remembers their service only after their tragic death.
And those warped politicians that politicize the death of the firemen for their only way of being seen in media as great sympathizers ..sadly none of our political leaders so called satraps have compassion ,, most have joined politics to become super rich..from rags to riches .. and even those politicians that have their roots in Mumbai use Mumbai as a milking cow ,,
The only time an issue comes on the burner is when there is a disaster Kalbdevi building collapse ,all these years they never thought of it ,, they want night life for the elitist but wont take other important issues like the mill workers , displaced bardancers now walking the streets , as whores and prostitutes .
The government of the people for the people by the people is only a government for the rich.. they are the Note banks ,,they have to be appeased at all costs .
Whenever there was a coalition government n Maharashtra it was the poor that suffered and the common man caught between the devil and the deep sea
..
I mean does the Government and the erstwhile CP of Muumbai not feel ashamed of rogue cops , cops that frame innocent people , women raped are more scared of the cops than the rapist who raped her ,,, and when will this end ,. the police brutality , police insensitivity , police rudeness ..people today are demoralized by our police force ,,,I am sure there are good cops ..but why do we see stories of bad cops now and again...why dont they have CC Tvs in police stations that a known for the wrong reasons than the right ones ..imagine corruption is a regular thing with Mahim crooked cops being in the news regularly ,,,and these are the guys who offer the first sandal floral tribute to Holy Saint Makdhoom Shah Baba.
Why not hire source deserving candidates offer them good salaries perks and groom them to be the pride of the Indian Police Force .
Even the firemen are treated shabbily ,,humanity has no respect with the politics of Maharashtra ..be it Congress or BJP.
By Firoze Shakir Photographer No1 - May 22, 2015 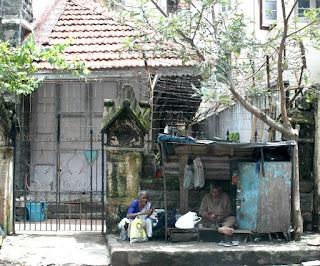 My memory is not very good its been over 55 years or more ..we lived as tenants at Khatau Bhuvan , a palatial house of doyen of Indian cinema late Nawab Kashmiri , he had passed away and his mother in law Ammi daughter in law of the second son of Nawab Wajid Ali Shah of Lucknow was in charge of the place along with his kids Akhtar Baji Anwar Bhaiya and Munawar Kashmiri whom we called Manu Bhaiyya ,, Man Bhaiya was a chubby kid almost like Mr Rishi Kapoor in Mera Nam Joker ,, but the most mischievous was Anwar Bhaiyya he is no more he died in Australia ,, Anwar Bhaiyya used to wear masks paint his face and would scare the shit off my paternal grandmother Khurshed Baji who lived with us ,, the moment my grandmother saw Anwar Bhaiyya she hid herself in the bathroom.. but he was a fun loving prankster ,,,

Akthar Baji was a diva and there were two divas at Khatau Bhuvan Akthar Baji and Gwendolyn Kanga wife of Dossa Kanga Parsi father of late Keith Kanga of Atomic Forest fame ,, the building was divided in two parts , the Modis Dalals stayed at our end , while the Kangas Barias and late Vimal Patacharige stayed on the other end ,with the family of Dr Pavri as neighbors ,, Dr Pavri married the daughter of Mr Dalal so they had a huge house at both ends .

Mr Modi on our side was a hunter and shot tigers , that were kept to dry in our compound ,,,they moved away to Pune I think.

But this is the background , my dad was a tailor master and before he came to Wodehouse Road lived in the filthiest slums next to a crematorium at Kurla I believe I was a year old my mom was 14 or 15 ,, I was born in Lucknow .

And Ammi gave my dad a room in the servants quarters facing the military quarter , we shared a common toilet with Keith Kangas servant quarter my childhood friend along with Vimal and Naval Baria ,, it was Granna Kieth's grand ma a Jehovah witness who would rebuke us infidels but that is another story ,, some other time .

My father through a Memon friend enrolled me at a school at Crawford Market , I ran away the first day of school.. I dont know how my dad found me , he told me no studies I will put him in the tailoring trade .. my dad worked at N Swamy Rao.. the most famous tailoring establishment , and Salim Khan Fitwell s father and my father worked as coat makers ,, Salim Bhais father saw rapid success , my dads success came much later

Akthar Baji was very fond of me and like a much prettier Aunt Peggoty took me under her charge , she got me enrolled at Private European School , a Methodist John The Baptists school..opp Usha Sadan.. and Irani wafer shop called Kwality I think..

The fees were very steep and this was an elitist private school junior level..and every class had two levels ,, The Principal was a strict disciplinarian Mrs E Lester her sisters Miss June and Miss Marjorie they stayed close to Hampton Court ..Jadhavji Mansion I think ,

I dont think my father a coatmaker could afford the fees Rs 50 those days and I think Akthar Baji paid for my education.. without letting my dad know , and Akthar Baji and my mom Shamim and another lady Rajjo Baji from Bhendi Bazar were best of friends .

I had great moments at Private European School my best friend was the cobbler who sat outside the school, he like me a lot ,and would call me and offer me wafers sweets ..I dont recollect his name .

Priya and Laila Kurivilla their mother would share heer childrens food with me the most generous lady I have ever met in my entire life ,,she taught me at my next school Holy Name High School.

Than there was Sheba Eapens from Hampton Court , Sens and the famous Ghouse brothers from Dhanashtra .. Ilyas and I shared the same bench.

There was Roy Daniels from Marine Drive his mother sent him Bombelli sandwiches that he shared with me .
There were the Ruias Madhu Sudhir Geeta rich folks and Goverdhan Dhoot fro Oceanic ,, Marine Drive ,,

And Indira Khare from Pallonji Mansions .. as the school was till the 4 Std I had to leave and Akthar Baji took charge again , this time she enrolled me at Holy Name High School as there was no place in 4 Std Fr Fx Frenandes Bozo told Akthar Baji to let me study in the third standard and if I did well he give me a double promotion ,, I did well but Fr Bozo did not keep his word and than finally from fourth I was packed off to the Sixth class ..

And I was too good in my studies as there was one room in Akthar Bajis house that stocked old new ancient literature and Akthar Baji would help me recite Lochinvar .. and at a young age instilled the love of books
,,
After The Kashmiris sold their house my dad refused to move out so the new landlord sent us to stay for a few months at Neelam Breach Candy and my dad finally bought a house 3 Mohini Mansions at Strand Cinema
..
Akthar Baji left India got setlled married in Pakistan.. Anwar Bhaiyya Australie and Manu Bhaiyya at North Bombay Society Juhu.

I am connected to Manu Baiyya cosmically ,,,and this is my humble tribute to a noble brave lady Akthar Baji ,, a diva of her time friend of Dilip Kumars Family , Begum Akthar , Johnny Walker , Mukri Sohrab Modi Jayant Sab.. and all football buffs .all .contemporaries of her dad a Legend Called Nawab Kashmiri...
By Firoze Shakir Photographer No1 - May 22, 2015