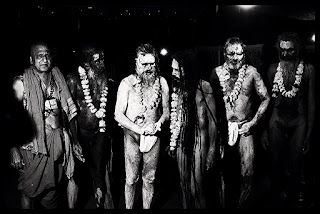 As a Muslim Press Photographer you can shoot the Hindu ethos of the Naga Sadhus but as a Muslim to have lived with the Naga Sadhus it was only possible because of my secular minded Naga Guru Vijay Giri Maharaj some bigoted sadhus objected to my presence some spat at me some cursed me but my Guru stood by me took up cudgels for me ,,some complained to the Maha Mandleshwar Swami Krishna Giri but he ignored them.

I had met Maha Mandleshwarji and told him that all my efforts of documenting the Naga ethos was a step towards Hindu Muslim amity I wanted Hindus Muslims both eyes of Mother India to live in peace harmoniously .
He patted me and this made some of the rogue sadhus more angry,, but I am not bad mouthing them they were wary of my agenda I was a meat eating Muslim in their eyes nothing could change that though I ate Satvik meals at the Akhara .

Because I was a Sufi malang both loved me and I shot the Nagas from within ,,I walked with them chanting Har Har Mahadev..the mantra of the Naga cry towards th banks of the River Sipra .

As a photographer I shot the soil of Hinduism as a Message of Universal Peace ...15 years I lived like a sadhu with the Nagas .

Than I shot the Naga Sadhus at Khamkhya Assam.

Yes I am the Soul of my Camera I have no sponsors no financial support but God has been great ,,,
By Firoze Shakir Photographer No1 - April 23, 2018

In The Eyes of the Beholder I am a Hindu 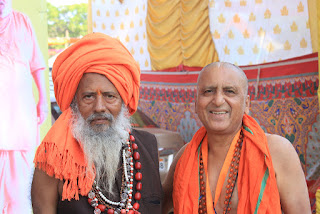 Before becoming a Muslim a Hindu a Sikh or a Christian lets become Human first Sant Guru Nanak ji
The picture is of my Late Guru Shri Vijay Giri Maharaj Juna Akhara 13 Madi the red bead round his neck is coral that I gifted him..he wore them to cherish my love for him I was first Muslim disciple he was my first Naga Sadhu Guru.
Shri Vijay Giri Maharaj was from a village in Mangalore he was married had a son his parents had promised their Seer they would give Vijay Giri to the Akhara but they absolved from their promise they loved their son too dearly.
They him married he had a son but he had no peace he was tortured by his parents broken promise to their Seer .
He sought forgiveness from his wife parents family and joined the Juna Akhara .
Cut to his life in his village he was a teacher and an Islamic scholar he loved Muslims and he was a painter and artist too.
This picture above is our last meeting at Ujjain Kumbh 2016 .
It changed my life it changed his too on the day of the Shahi Snan there was a great rush to reach the Sipra but on that auspicious day as his disciple went ahead he was left behind with me he collapsed he was vomiting he sat in a corner looked me i the eye and told me to go ahead shoot the Shahi Snan I refused I am not a very strong man I lifted him on my shoulders and bought him a long distance away to the Naga Sadhu base camp he was checked given some black coffee and his disciples caught up with us .
Both my Guru and I took the holy dip in the Sipra he looked much better and I requested his permission to shoot
Maha Mandlshwar Of Juna Akhara Swami Avdesh Anandji I shot his video and Swamiji refuses to believe I am a Muslim he says deep down in that part of your Humanity you are not just a Muslim or a Hindu you are all Faith .
This was the last Kumbh of my Guru an Islamic scholar lover of Hussain he spoke of Imam Ali would call me before I went for Moharam Ashura to cut my head with a dagger the Kama Matm ritual,, he would tell me dont hit yourself hard or you will be hurting me too,
When we left Ujjain he took an ordinary train ticket I had a reservation so I asked him to come along with me he sat near the door of the train .
When the TT came I told him about my Guru if I could adjust him on my seat I would sit and sleep on the floor he said it is fine as long as no one objects I sat at his feet pressing his legs kept awake all night as my Gurus fever returned there were two boys with Guru but they kept away as they did not have reservation so they sat near the train toilet .
When the time came for him to leave my Guru wept a lot hugging me and that was our last meeting .
I reached home he called me and said that what I had done none of his disciples had done I told him I had done nothing he was my Guru I had to take care of him he was my Father our religions were different but our blood was same our humanity was same .
My Guru died tragically in his village at Mangalore .
The other part of my Naga Guru he was a master tantric he was a shaman he would become a woman gesticulate like a woman speak like a woman and the Devi entered his body this phenomenon I never witnessed but it was described to me by his man disciple Mahesh Bhardwaj from Haridwar who had seen it he shot the maximum videos of our Guru.
I normally dont post pictures at Facebook but I will give you the link to my photo set Ujjain Kumbh at Flickr.com
Guru Shri Vijay Giri came home once saw my granddaughter Nerjis and prostrated before her I was puzzled I asked him.. all he said she is Shakti ..
And what shocked me 4 year old 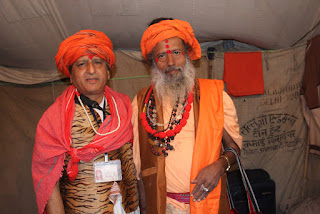 Nerjis  and he got along as they knew each other since a along time than she gave my camera to my Guru told him how to shoot a picture on my DSLR and Guru shot my energetic granddaughter Nerjis Asif Shakir .

I will go to the Ardh Kumbh with my Gurus ..Guru Bhai Bhagwatiji my oldest Naga Guru contact since Maha Kumbh Allahabad in 2013 .
I met my Naga Guru at Nasikh Kumbh 2003.
That is another interesting chapter of my life ,,,
By Firoze Shakir Photographer No1 - April 23, 2018 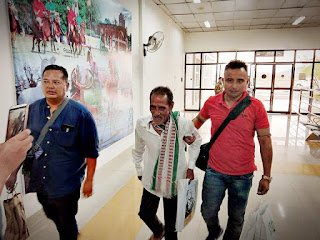 I could not recognize his voice it had changed from Maf Karo Malik it was more positive and had a renewed vigor.
He thanked me for all I had done I told him as I tell everyone I have done nothing.
Whatever happened was God's Mercy and the love of the Manipuri people their love made him visible I am too small a man I cannot perform miracles he began to cry I told him to hold himself be strong.
His medical check up is going on he said I should have accompanied him to Manipur I told him it was his Victory march he deserved this glorious moment.
He and the people of Manipur had shown the world the real meaning of Hope and Humanity.
This episode of human bonding could have never happened in any other city or state.
It happened in Mumbai that became the heartbeat of love for the people of Manipur.
I reiterate the story is not about a viral video nor about Gambhir missing from Kumbong village since 40 years the story is the power of social media used positively that connected a man to his countrymen.
This story is of Manipur.. Manipur Police and Bandra Police Mumbai Police this story is of the power of a You Tube video.
I was merely an anchor and I take a back step as humility would never let me bask in another man's achievement.
He kept himself Alive for his family though the odds were against him and here I must mention Find Gambhir What's up group they relentlessly left no stone unturned to seek out Ghambhir.
I must thank all you Manipur friends and those who commented on the viral video I opened the comment box only for them.
I type with a single finger of a permanently damaged hand so I cannot reply to their comments.
This was a indeed a very Good Morning Sunday wish from Gambhir Singh to me he hopes I come and see him one day
And I told him he will very soon become a successful politician as every party will now want to endorse him as their candidate.
He Gambhir Singh made Manipur famous..through his humbleness through his humility.
I have been asked to remove the medical check up pictures.. From the person who sent the pictures to me. Sorry.