The Hijras Of India Through The Eyes Of A Beggar Poet 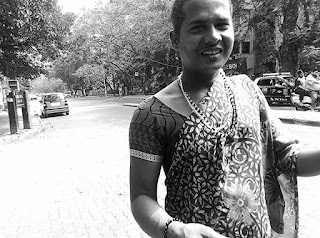 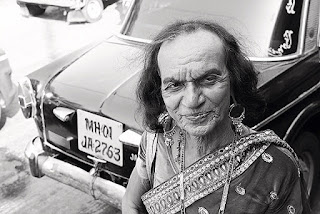 I want to show you the poetic darkness of a hijas life in Black and White without their gaudy makeup.. the poor hijras and the well of hijras ,, the hijras below the poverty life and the jet flying hijras of India ,,this is a documentary passionately showing the lost tribe of God ..neither Man nor Woman ..
Sexually brutalized raped sodomized both by people and the rogue cops ,,

Read behind the lines of sorrow on my pictures ,,

The Poor Migrants Of Assam and The Cows Of Lucknow 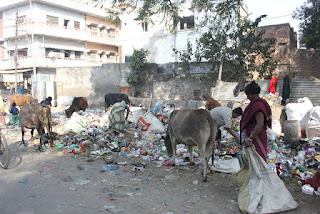 I felt sorry for both but yes more for the Assamese .. they are the pride of Assam and the heritage of the River Brahmaputra ,,
I was in tears when I shot this ,, if you are as sensitive and human I am you will have tears too..


This is Mr Akhilesh Yadavs Uttar Pradesh perhaps the contractors who bought these poor from Assam with their entire family pays them less than the locals .. I dont know ,,
I am a Mumbai guy ,, but never seen such apathy and cheapness of human life ,,

The PM says India is marching ahead ..ys only for the rich the protected Adanis Ambanis and others ,, its marching on the dead bodies of murdered raped women its marching had on the humiliated brutalized bodies of the Dalits it is marching ahead on the dead body of Akhlaq of Dadri..
Never was my India so deeply divided .. between the Brahmins and the low caste...I am not into politics .. nor a part member but I am a senior citizen 65 years old lived all my life in Mumbai ,,it hurts .. hurts hurts as much as it hurts all of you.
I can only poke your conscience through my pictures ,, original content ,,some through my poems and some through my videos .


I was in Assam shooting Ambubachi Mela Khamakhya ,, and the sweepers loved me because they had seen the Hindi film I had done a cameo and I took their broom to clean the streets of Holy Khamakhya ,,

Assam is Gods gift to Humanity and the Assamese are Gods true children.. seeing them in the wilderness as garbage scavengers much before I visited Assam .. was terrible ,,

The Dam Madar Malangs Of India 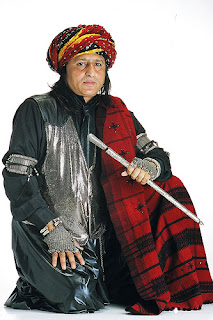 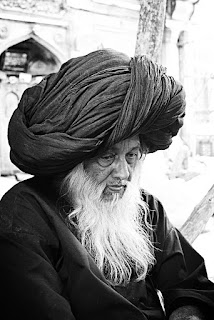 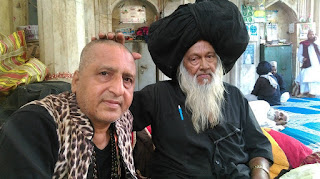 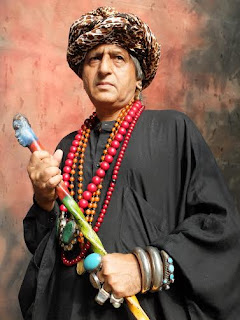 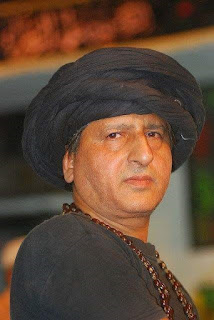 Giving me a rush of Adrenalin is the thought of shooting the Malangs of the Madariyya Order...most of them are celibate and sport long dreads that can be about 18 feet or more .
Within the Madariyya order are different sub orders but I belong to the Asqan headed by 102 year old Syed Masoom Ali Baba a very simple austere man .. he cuts through all religions and sects ..


The Hindus of Panihar his spiritual abode consider him an avatar of Lord Shiva and Masoomi baba has built schools toilets clinics in his village and here I must reiterate the Hindus and Muslims live as one ,,if someone in the village falls sick all stand by him..

Hindu feasts and Muslim feasts bring them all together ,,When little Shahnawaz a relative of Masoomi Baba dragged me up a hillock.. to see the Temple Of Durga Devi,, and I shot pictures , the head priest touched my feet and thanked me as Malang Baba ,, he offered me tea and I had tears in my eyes ,, this is Atithi Devo Bhava .


After Panihar close to Gwalior I went to document the Dam Madar Malangs at Makanpur the Urus of Zinda Shah Madar close to Kannauj UP,
The experience here was memorable ,,I had a wound on my leg and Masoomi baba knew I could not walk much would see that I was offered meals and well taken care of by Liaqat Baba Malang .

And I can seamlessly shoot the Malangs dressed in black as a Malang and shoot the Kumbh dressed as a Sadhu .. without jarring the inherent poetry of my LIfe ,,
Adding to my documentation of the unique diversity of India was meeting the dead flesh eating Aghoris Tantrics at Khamakhya Assam.

I have been to Vancouver ..Mauritius Singapore HongKiong Nepal had offers to see USA UK but I declined I want to live die in India ,, my flesh is part of the soil of my Indianness ,,,I have no issue with your religion your customs your rituals as a photographer I shoot it as the Magic of India ,,
I shoot Hinduism as Hope and Hindutva a Message of Universal Peace ,

And I must mention the Malangs the Rifais get along beautifully with the Naga Sadhus ,,,

I shot the Qalandaris and the Waris Piya Malangs too ,,,

Added to all this and almost poetically connected to all this is my documentation of the Hijras or Kinnars of India .. who are at home at all Dargahs but mostly Ajmer Sharif Kaliar Sharif and Haji Malang ..

They have their eponymous Kinnar Akhara thanks to Guru Laxmi Narayan Tripathi who fought for it teeth and nail and established the foundations of another pillar paying tribute to Ardh Nari Nareshwar ,,,a form of Lord Shiva
By Firoze Shakir Photographer No1 - August 04, 2016

Email ThisBlogThis!Share to TwitterShare to FacebookShare to Pinterest
Labels: The Dam Madar Malangs Of India

Walking From Versova To Juhu Danda And Khar 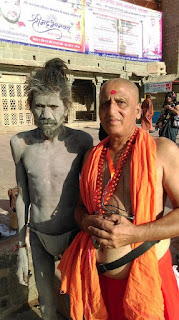 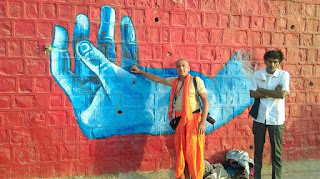 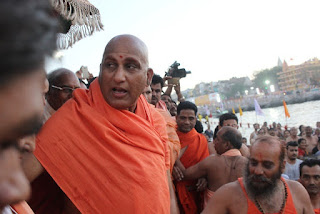 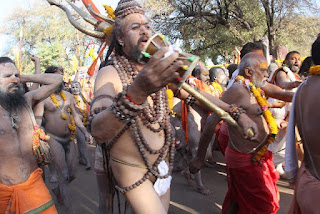 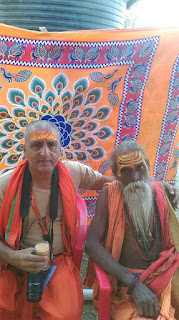 My Naga tent at Bhiku Mata Road had the Nagas guests of Maha Mandleshwar Kalyanji Giri ,, though he had a bigger spread beyond this road .
I on my part was less in my own tent village and more with the other Nagas staying around our periphery ,, there was one Naga Baba he was also called Vijay Giri and he was very close to the Sufi Qalandaris and would quote Khusro and ,,, Imam Ali ,,
I got along very well with him ..and these were the few that knew I was a Shia Muslim .. rest took me as a Naga Sadhu ,,,I was okay with anything,, I had come here as a photographer to document Hope And Hindutva as a Message of Universal Peace .
My religion I had left back at home here at Ujjain I was all saffron in mind and thought ,, I was also close to a Naga Sadhu who was a dedicated Ardh Nari Nareshwar ,,and the hijras eunuchs surrounded him they danced made merry every evening ,,,
Further ahead took the road to Bhuki Mata Mandir were th Naked Naga Babas ,, I shot but they just wanted money..one of them lived on a swing and liked me ,, he would do yoga raising his leg on my shoulder ,,but he thought I was a Sadhu too..
I did not venture out too much I am not much into Temples architecture I just wanted to shoot the Kumbh life the people the Ling Kriya Shahi Snan and the Kinnar Akhara the Akhara of the Hijras ,
Sadly I could go there only once to meet Guru Laxmi Narayan Tripathi.. the next day I was leaving Ujjain.
I shot over 5500 images a lot of videos ,,,because I lived within the Nagas my pictures had the real taste of the Naga lifestyle .
My friend and senior disciple Mahesh Bhardwaj .. would apply the tilak vermilion sandal wood paste and make sure I became a part of the people I was going to shoot .
I met a few Aghoris ,,and a lot of foreigners ..I had a great Kumbh ,
without any problem I tried to go back for the following Shahi Snans but I was not financially capable ,,,business was low ,,,,
But I am happy to share my pictures my thoughts with all of you ,,
This was my first Ujjain Kumbh ,, I had missed the earlier one all in all this my 4 th Kumbh..
My repertoire as a photographer would be redundant if I had not shot this great event that showcases True India ,, Kumbh Mela .
Har Har Mahadev
It is not "Har" but the Sanskrit word "Hara" which means taking away. This is to denote an embodiment of captivation, consolidaton and destruction.
As you know , Lord Shiva is also associated with the term " The Destroyer" . Thus, this chant implies that "O Great Lord, liberate us from this vicious cycle of births and deaths (or attain Moksha)"
'Hara' here implies taking away our sorrows, grief, lust, ignorance and all worldly attachments and liberate our soul.
meaning of Har Har Mahadev from the net .
By Firoze Shakir Photographer No1 - August 04, 2016