Man Shitting on a Mound of Despair 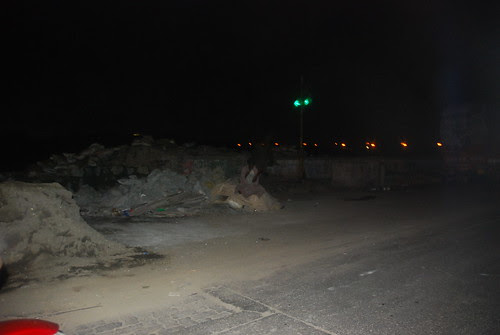 Man Shitting on a Mound of Despair, originally uploaded by firoze shakir photographerno1.

I was in the cab without my Tshirt and we connected for a singular karmic moment he read my thought I read his..


And this is the stretch that leads you out from Dharavi towards Bandra East connecting me to Bandra West through the flyover.

All men born rich or poor are equal when they shit, be it on a mound or a gilded toilet seat, the wise man the fool the beautiful the ugly are all one bound to what goes in must come out..

So shitting on a mound of despair is a spiritual exercise too.. 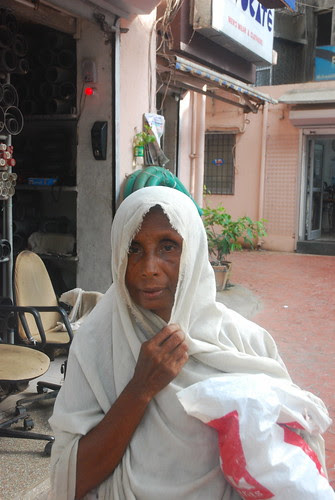 to marcel duvoix in gratitude for the poems he has written on me and my grand daughter marziya ..in his yet to be published anthology.. 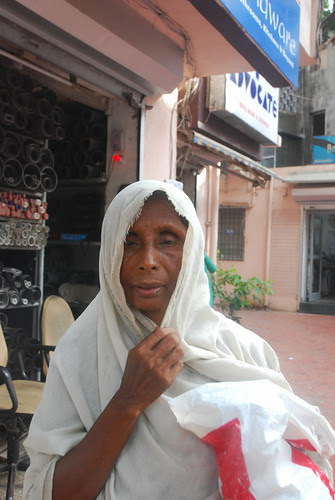 What hurts I Dont Know Being A Muslim or Being a Beggar, originally uploaded by firoze shakir photographerno1.

Sometimes being a Muslim hurts others more than the person who is actually a Muslim and forced to beg on the streets.

If this lady was wearing a hijab and begging it would stand out like a sore thumb..and give definition of mystical nature to my photograph too.

She is a Muslim beggar from Murshidabad , normally they wear white or black.

Why she is a beggar how she became a beggar I dont know I am not social anthropologist or a social activit.

Because I shoot pain and she is Mannequin dressed in pain on a street shopping window I shot her ..I have a set of over 500 pictures at Flickr titled Muslim Beggars that we choose to forget..

I could have written Muslim Beggars that the mullah and God forgot too.

Their life is governed by the few coins you give them, their main begging day is Thursday or Friday after Namaz outside the House of God.

They are the only Muslims that dont celebrate Idd at all, the day you celebrate it they work and beg , Idd is just another day in their life..

Ramzan the most beautiful Holy month is the best month for the wretched souls of the beggars too.

They get fed well in the evenings from the Iftari left overs that you gorged with a hollow burp..

And because I showed you Muslim beggars the upper cultured cybernetic Mujhaidas called my photography Anti Islam at Flickr.

As though I created beggars .. wear the hijab but do see Truth without blinkers and these Mujhaidas have holy verses holy sites as Wall Paper on Flickr and Facebook too.

Because this Muslim beggar lady knows I will shoot her and pay her too, she came and stood in front of me like a lamb at slaughter a few minutes before Bakra Idd. 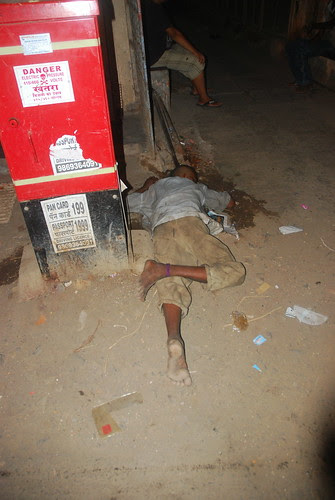 I have been shooting sleep without sleep knowing that I have shot it in serene slumber in its human soul.

And in Mumbai everywhere you go you will find man deep in sleep even when he is awake and walking on two legs too.

Without being funny sleep is one of my subjects and I dont let sleeping dogs lie in peace either.

Near my work place is a booze joint , and denizens such as this find themselves on the wrong side of the gutter..

I dont think I fell in the gutter but the moment was not too far away, I got saved by my family just in time and photography and blogging became my alcoholic addiction as default.

The places I drank are now memories I pass them many a times and wonder if Firoze Shakir is really holed in there..

One of them is just across my work place and I have never walked in either.

The ones that added to my angst as boozer closed down Irani and Casbah.

Yacht was the all time alcoholics favorite.


I never liked Janta on Pali Road or Deepa at Hill Road.

But I knew all the watering holes even on dry days.

And some of my best drinking friends died untimely ..no forwarding address either.

And I have to meet them sooner or later..so a man asleep can trigger dark thoughts too at 5 am in the morning.

Do People Really Have Time For The Shoe Shine Boy? 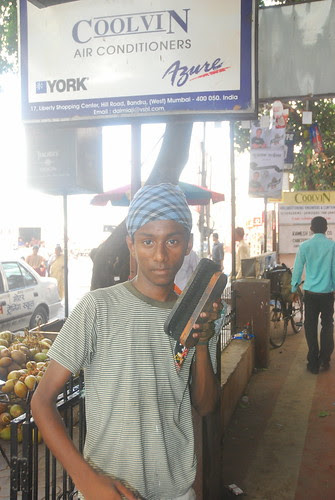 Do People Really Have Time For The Shoe Shine Boy?, originally uploaded by firoze shakir photographerno1.

He does not beg he told me, but business is really bad on a prime piece of land called Bandra Hiill Road.

Next month will be worse when the rains set in.

So he begged me to give him some money he had not eaten since morning.

And he is stylish too in his beggarly way of making money through shining shoes.

And this is life on a slow track, normally he has a few shoe shine boys with him , but I had not seen them since the time I shot them a few months back.

Ironically this is street photography, I shoot life on the street and as I saw it, others see him too with or without a camera , does not really matter.

I see things differently I read right light that falls on my subjects soul through poetry.

So my photography has a metaphoric purpose it connects with a part of your mind too, sometimes my audience base right from the beginning was the outside world , perhaps the white mans world as I was nurtured on blogs at Buzznet among most of my white friends , Indian websites kicked my ass out either I was a confused Muslim or my language was far too filthy for the Brahmins of the ChemburMatunga belt..I was shown the door at Sulekhas,


So from Buzznet I came to Flickr and I began posting pictures since 2007 June , I have had my ups and downs as a blogger and as a human being I am not perfect and neither are you..

You maybe more intelligent than me perhaps a better photographer poet than me but I am not competing with you , I am not debating with you , I am hardly a scholarly time neither am I a Mullah.Nor am I proselytizing my Shia faith on you.. if such was my devious agenda I would not be shooting other religiosity.


With the same fervor as I shoot my own.

When people dont like blood or hate my pictures than it is not for just what I shot but simply their Islam has no place for the Shia school of thought.

On Facebook a friend of a my Hijra Guru seeing my Shia bleeding pictures called them Madness and gave me a huge spiel on his likes and dislikes of his mental make up, I did not want to be punished by his comments on my future posts I removed him from my friends list and blocked him too.


I did this without malice or any evil intention.And I complained about him to my Hijra Guru ..he is her poster boy too like me.

And he came in to shoot the Maryamma Feast with a friend it did not matter , but I asked myself is the Shia madness different from the Tamil rod piercing madness.

We shed blood so it is madness and it is our blood not yours or an innocent bystanders , so why such a biased attitude..and you shoot the Tamil feast because there is no blood I dont get it.

So being a photographer who does not sell his pictures or his pedestrian text is a tough one.

So I shoot pictures alone not for any selfish reason , simply because the white mans mind sometimes is a very difficult pompous biased commodity to appease even barefeet with all the humility in the world.

The only exception would be one white man Dr Glenn Losack.. I would give my life for him.. He is the only person in this wide world a Brooklyn Jew who is my blood brother.

The only person who offered a blank cheque for Marziya's future education which we politely refused.

Marziyas father is a very upright man and he talked Glenn out of it.


So my relationship with Glenn Losack is a very deep one , we dont get along we fight but we bond.We are brothers soul mates call it what you may.


And I got up to write this I wanted to bring out some bitterness of a past episode and I did it through the help of the shoe shine boy of Bandra Hill Road.

He earns and begs with dignity ..and subconsciously it was his angst that became a vehicle for my own dark thoughts. 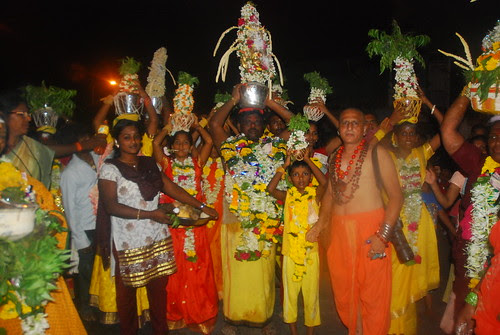 My lens had milk stains and my focusing was affected , as I shot very close to Raja who would take milk in his mouth and splurt it into the devotees mouth to lubicte the inserted 18 feet rod in the cheek,, and with this lot I end the series of Maryamma Macchimar Colony I shot it on 23 May and the uploading got over today.

I shot 1619 photos in a few hours barefeet and later I removed my tshirt too.

This was the first time I shot with two camera bodies and a wide and a telly.

I have after this shot the Sion Koliwada Maryamma Feast on 25 May 2010.

There was an invitation for one by a Punjabi guy Soma Bhatia but due to work commitments I did not go.

I have enough footage of this feat for this year.

My chances for going to Ajmer Sharif Urus are very bleak only a miracle by the Khwajah Gharib Nawaz can see me there , as things stand now I think my going to this spiritual pilgrimage is next to impossible.

And I think photography is predestined in my case..if it happens it happens .. if I am to shoot the Rafaees Malangs and the Hijras than I might be called ..


I dont give up hopes very easily but I am going through the worst professional stage of my career..

Photography unfortunately or blogging is not my source of income at all.. but I am passionately in love with blogging call it self obsession .. spreading a message of Peace and Humanity through all religion and cultural events ..even the one that I belong to and condemns me as a heretic by the so called neo Islamists of today..

But yes I am a Shia which for me is my spiritual brand equity , I think I would be rudderless just being a Muslim and not a Shia Muslim.

Being born an Indian is of course the gift of my destiny.. at least in India Muslims dont slit the throat of another Muslim..
In India it hardly matters what religiosity you belong too being Human is really what makes you a Pucca Indian.

And this textual difference in emotions is what makes a blog more humanly accessible than an article in the newspapers ..accredited by faith and love for all beings.

And a person on Facebook not even on my friends list commented on my picture of Black Poetry , he said I was self obsessed ..and the fuck he does not know me from Adams..

Being self obsessed but not shitting foul comments on other peoples posts , or unduly criticizing somebody's religion is not me ..

That is why I have choked my Flickr comment box for good..
I have no time to give importance to your comment good or bad,...my picture is what matters whether you like it or you dont..