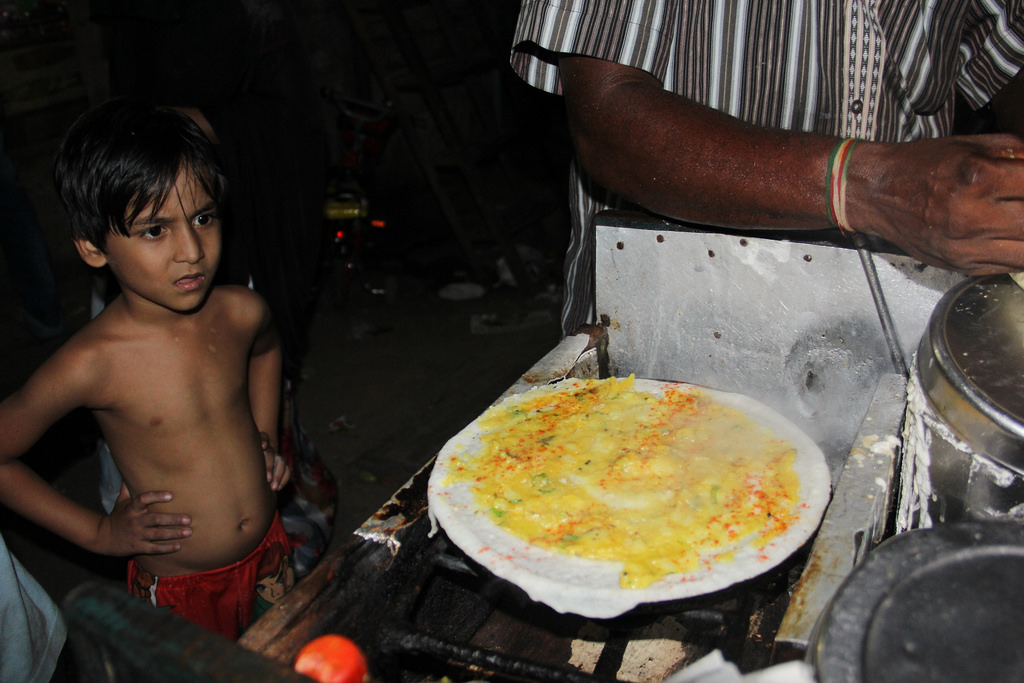 A lady was buying masala dosa and this kid was watching enviously I was in a hurry for a meeting I wish I had fed him..
By Firoze Shakir Photographer No1 - March 31, 2015

Email ThisBlogThis!Share to TwitterShare to FacebookShare to Pinterest
Labels: Hunger ...

The Street Barbers Of Bandra Reclamation 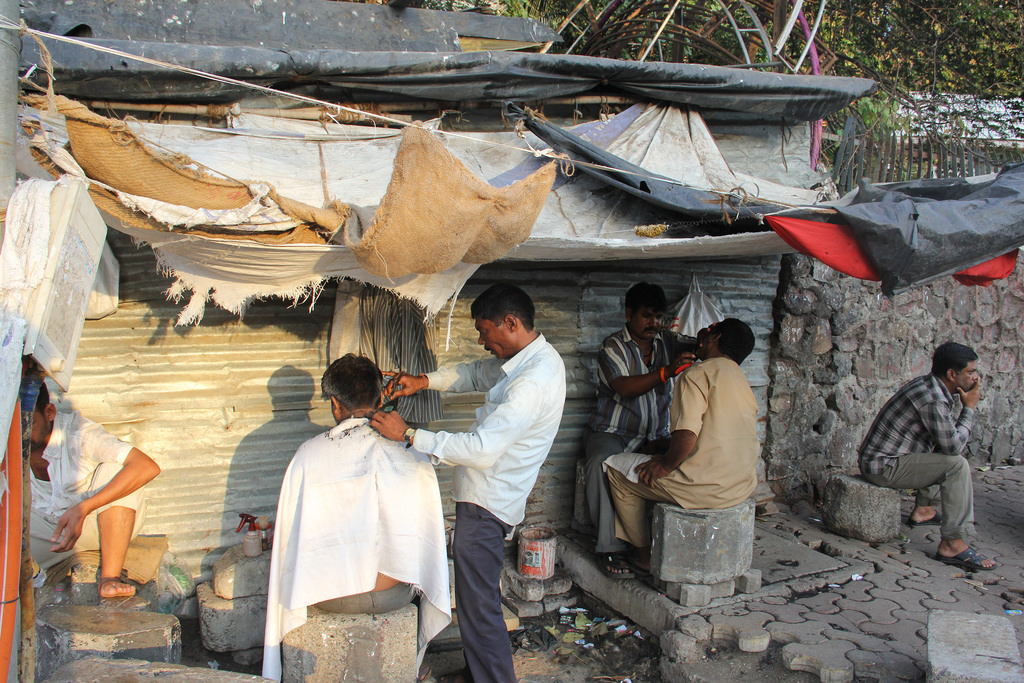 These guys sit on the main Bandra Reclamation junction , and surely they pay hafta to the cops and the municipality , hafta is protection money for plying their trade and they will pay money for doing business here to the local don.  so you to pay a price to survive in Mumbai even as a street barber .

And the workers slum dwellers , taxidriver , rickshadrivers mostly sit here for a shave or haircut ,,and this is the biggest hub of ricksha driver s ,, so the barbers are mostly busy ,, than there is mundan or religious tonsure or even the Muslim male childs circumcision,,which gets them extra money.

And if I pass this way to take a bus I shoot their pictures and I would rather shoot these common folks than run after celebrities ,,my granddaughter Nerjis has shot them too and as a 3 year old she is never intimidated by adults ,, and one day when I am gone  she will remember these street moments nostalgically ,

Email ThisBlogThis!Share to TwitterShare to FacebookShare to Pinterest
Labels: The Street Barbers Of Bandra Reclamation

The Street Barbers Of Bandra Reclamation 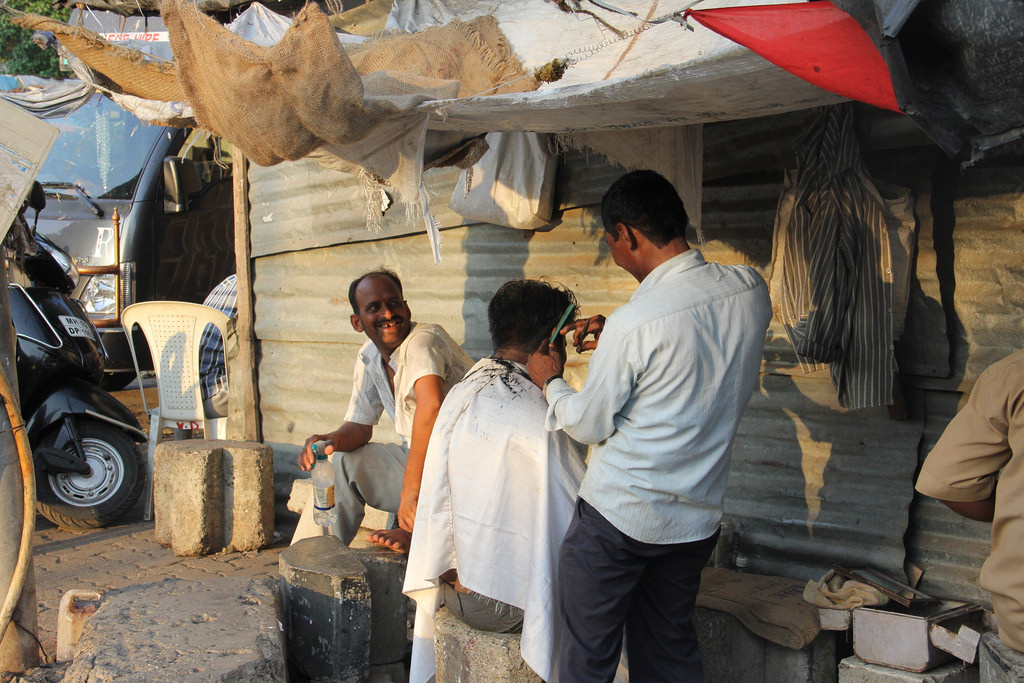 This was shot yesterday while going to see my diabetes doctor at Mahim , and I shoot rapidly , my kind of photography most of the time has no time for composing and I prefer to point and shoot as these are not planned pictures these are forced on my pictorial consciousness by the Lord of Light and Shadows .

I chatted with the barbers  , and the latest topic was the new barber cutting hair in their open air salon,, he was from Jharkand . the other two from Bihar I think..

I know them for so many years but I dont know their names I have never had time to sit with them talk to them , but yes I will shoot their video and bring them out of the wilderness of their surroundings let people know about the common working man a migrant in this case in Mumbai..Mumbai has given them home and if the satraps of their state like Mr Nitish Kumar and Mr Manjhi were not fighting for a bungalow and concentrated on jobs infrastructure I can assure these guys would never come to Mumbai to work as slaves and the same with Mr Akhilesh Yadav.. they never tried hard enough the only reason they do anything is to get votes be in power and have fancy shows at Saifai as the Bhaiyya slogs his ass .

I had once gone to shoot the red light area at Kamatipura and was shocked to see a few Bhaiyyas in sarees painted lips working as eunuchs and they were new to the trade .. and when everything fails than necessity becomes the mother of Invention.

Well thats that , I am at home for the moment my morning walks are over with the hairline fracture on my leg I am limping in the house and if my dead Mother was alive she would say someone has cast an evil eye at  you at the MET Cricket grounds as I walked a lot , yesterday before I got my leg checked by the bonesetter I was in pain but I still walked 4 km using the Nike Running application ..

I went to the bone setter late in the night at 8 pm and after he had finished with my leg and I had shot his video I went into the slums I had an urgent work and from there limping went to Pali Naka to meet Mr Yusuf Lakdawala I tailor his clothes ..the  meeting was at the house of Qureishi Builders ..

And here I remember the owner of Qureishi Builders Mr Babu Qureishi  a very humble man he used to walk with us at Joggers Park , he loved to exercise in the park and was very kind to me ,, as he knew me when I stayed at Veronica Road Bandra on rent , he was constructing Qureishi Heights Bandra at Waroda Roadd  those days ,, and he died while working out at Joggers Park.. the other person who died like this was Mr Tanwani of Union Drapers Elco Market Bandra .. he too got an attack in the park,

On retrospection I doubt I will be able to walk for a few days as it would aggravate my leg .. and I am  now tied to my bed like a pet dog..but I have to work .. and most of all you guys will get a much needed break from my Garbage Art ,

Marziya has her exams she has gone to school , Nerjis and Zinnia are fast asleep..

I have taken a Brufen for the killing pain.. but I shall overcome  but my legs are unlucky the last wound on my leg because of my diabetes took almost 6 months to heal.. and I cover my legs more than my Ass.

Wife silently accuses me of overdoing whatever I do,.. what was the need to go to the Caves she says with her eyes  ,, And I Shut The Fuck Up.

Email ThisBlogThis!Share to TwitterShare to FacebookShare to Pinterest
Labels: The Street Barbers Of Bandra Reclamation 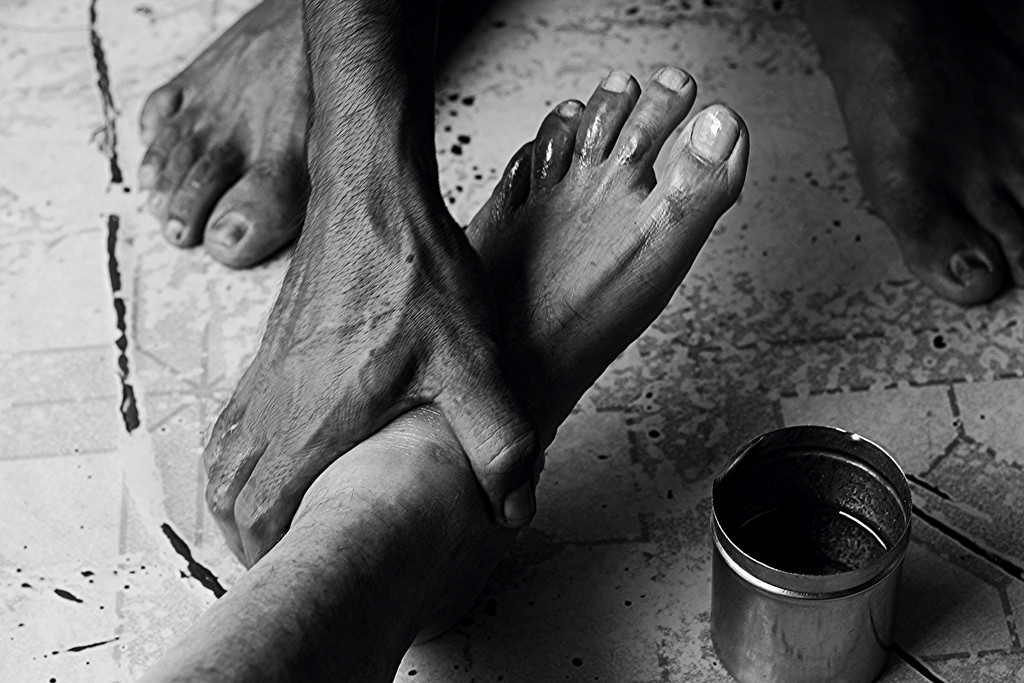 I have been coming to Nizam the bone setter  since 15 years .. and have never gone to an orthopedist ever ..it takes about 5 days for my fracture to heal this is a hairline fracture while climbing the caves at Murud Janjira recently,, and too much pain.

A bonesetter is a practitioner of joint manipulation. Before the advent of chiropractors, osteopaths, and physical therapists, bonesetters were the main providers of this type of treatment.[1] Bonesetters would also reduce joint dislocations and "re-set" bone fractures. 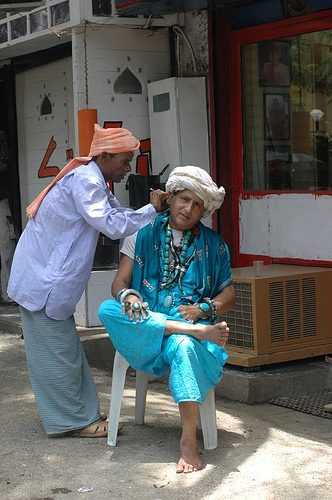 doomed shadows
lights bright ,,i was
wondering whether
to turn this into
black and white
the soul of garbage
a mortal fight for
some an awful sight
for beggar poets
street art in poetic
flight ,, garbage
where god lives
on this burial site
as man generates
garbage funereal
rites even angels
take fright ..as crows
goats rats dogs cats
nibble in delight ..
poetry and pathos
passionately in
unison re unite
every morning
as the suns rays
envision to excite
i offer my prayers
to the lord of the flies
despite the mosquito
bites ..a garbage god
humble human polite
eyeless to wastelands
of human plight