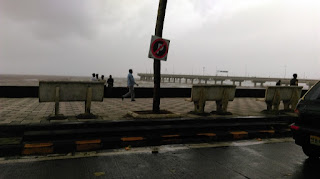 I come here very often to meet a client I come by cab via the sea link and again take a cab back home ,, I shoot a few shots from the cab window and the cab driver was telling me this place is jam packed on weekends .

The poor of Worli gaon , Worli slums live cheek and jowl with the super rich ,,as far as sharing the promenade goes ,, and the poor are happy getting wet playing cricket off the saaface ..while the rich walk ,, to lose weight some jog , there are guys showing of their curves on the parallel bars ,,unlike Carter Road and Bandra Bandstand you dont see many Miyas here ,, I maybe wrong I come on weekdays only..

Worli Seaface is nostalgic as I shoot the Marriammen Feast here every year,, once I used to come to Mr Dilip Vengsarkars house but that was a few years back for his trousers and shirts .he was very hospitable  and extremely courteous ..I used to make Mr Sunil Gavaskars suits too a very long time back..

And beyond the  Worli Seaface is Worli Gaon . fishing village I shot the eve of Holi among the Kolis ,, with my friend from Reunion.. The Kolis loved him and were hell bent on treating him to their home made Jambul liuor but my friend politely refused .. The booze that some Kolis brew is impeccable and at Danda a lot of Bollywood stars came in the night to taste and savor it including bombils fried ravas and promfret ,, Koli cuisine is out of this world I know it as I lived at Danpada .

The East Indian Kolis of Vasai Killa Bunder are great hosts and their food is spicy and lip smacking .. I know a family Rudolf my fisherman friend ,

The beauty of a blog unlike a picture of an analogue photographer is not limited to what he shot , the blog raves of stories tidbits anecdotes coherently beyond the picture ,,the blog takes you to unexplored territories and you need to write simply.. to get the message across the other end.

I would be a fish out of water if I tried blogging without a picture the essence of my blog is the content that I shot impulsively maybe accidentally too..I hardly know about SEO shit I dont care a bit about it ,, as long as I am emotionally involved with the train of my thought ,,

So a street shot of the Worli promenade on a rainy day ,, can act as catharsis for the loneliness within the inner angst ,, and strangely when I come to Worli Seaface for work I am formally dressed no sartorial shocks .. no turban no beads no rings and certainly no mystical attitude ,,

After my Canon 60 D got wet in the rains and conked off I am scared to take it out without my umbrella ,, taking out in the raincoat was miscalculated disaster ..but miraculously it recovered and is now in the best of health.

Please Do Not Disturb,, We Are On Hunger Strike For Yulin Dog Festival China 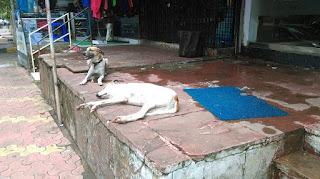 Geography and climate[edit]
Yulin is located in southeastern Guangxi province along the border with Guangdong. It is a hilly basin with a total area of 12,838 km2 (4,957 sq mi).

History[edit]
Artifacts suggest that the area was settled before the Qin Dynasty but a commandery by the name of Yulin was not established until early Han Dynasty. The urban centre of Yulin became a zhou in 996. Since ancient times, Yulin has been important for trade and communications between central China and the south, especially the coast of the Tonkin Gulf.

Administration[edit]
Yulin has 1 city, 2 districts, 4 counties, and 119 towns and townships.

Yulin has a population of approximately 6.7 million. The majority of Yulin's population is Han but there are Zhuang, Miao, and other ethnic minorities totaling more than 100,000 people.
Language and culture[edit]
Some Chinese linguists have suggested that the Yue dialect of Yulin is the best surviving example of what ancient spoken Chinese would have sounded like based on rhyme patterns in Tang dynasty poetry.[citation needed]

Tourism[edit]
It is famous for its many mineral hot springs and one of China's oldest and most famous towers, Shiyi Tower (石嶷文塔).

Dog meat festival[edit]
Main article: Yulin Lychee and Dog Meat Festival
Yulin is also known for its annual dog meat festival which takes place on 21 June. Over 10,000 dogs are killed at this festival for human consumption. Reports of inhumane treatment, including torture, caused celebrities and others to protest against the Festival.[1] A woman named Yang Xiaoyun went as far as to pay 150,000 yuan to save 360 dogs and dozens of cats from the festival in 2014 and 7,000 yuan to save 100 dogs in 2015.[2][3] Some Chinese celebrities such as Chen Kun and Yao Ming, as well as international celebrities like Ricky Gervais, Ian Somerhalder, Leona Lewis, Lori Alan, and Tom Kenny have also publicly expressed a distaste for the festival.[2][4][5]

Education[edit]
Yulin is home to Yulin Normal University, where there are 13 departments with 38 four-year undergraduate specialties, 14 three-year specialties, more than 17,200 students including 12,000 full-time students and 5,200 higher education students.
By Firoze Shakir Photographer No1 - June 24, 2015

Email ThisBlogThis!Share to TwitterShare to FacebookShare to Pinterest
Labels: Please Do Not Disturb, We Are On Hunger Strike For Yulin Dog Festival China 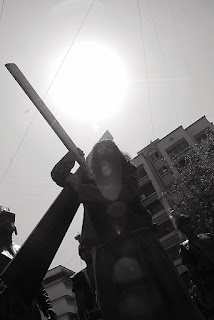 9044 images till date
part of my destiny
my cosmic fate
a shia muslim
spreading love
hope humanity
through people
photography
devoid of hate
different paths
but a single gate
to reach our
only ultimate
destination we
anxiously wait
our soul will be
free as our flesh
locked up in a
coffin a polished
wooden crate
we can miss
all appointments
but not the final
date ,,leaving
behind all our
wealth belongings
even our blessed
soulmate ,, on a
chess board of
life final checkmate