The hijras should not be condemned because they are transgender , born male but having opted for a womans identity and gender.

The hijras are as human as you and me //or more human than you or me.

The hijras are devoted to almost all divinity, the Muslim hijras offer namaz keep fast during Ramzan and abstain from their worldly activities and soliciting during this mubarak month.

Hijras are not guinea pigs or simians in a cage they bleed as you bleed perhaps more.
I shoot hijras with dignity, and hijras come in all shapes sizes quirks and idiosyncrasies.
I have been lucky to have been divinely helped to show you the hijra in all her beauty and simplicity.


I know hijras who tell me that they will soon leave the trade and become devoted housewives or mistress of the person they love.

So the hijra too needs love as you and me perhaps more than you and me.

To shoot the hijra as close as this is not photography it is a bond that comes from within the hjra.

I have met evil devious hijras too but I think of them as a minority and victims of abuse and neglect in their childhood.


I shoot hijras as poems and make you read them as poems too.. I stop becoming a photographer the moment I see them through the viewfinder of my human soul.

I dont ask hijras their names , their past life or any question that would embarrass or humiliate them.

I shoot them move away, if they tell me to stop shooting I stop immediately.

I respect the senior hijra gurus and Ma Madhurima of Park Site Vikhroli treats me like her son.

I know if I had overstayed a few more days I could have more than 20000 pictures of Hijras but I cut short my trip to get back to my work and my grand daughter Marziya.

It miraculously did happen in the end.

The Cosmic Poet and his Muse

The Cosmic Poet and his Muse, originally uploaded by firoze shakir photographerno1.

Raveena the Hijra sensational beauty and me at Moti Katla soon after the Friday Namaz got over.

This balcony was earlier filled with the namazis.

Even a few hijras in white clothes participated in the Friday namaz from this house that is rented by Gopal Haji and Babita hijra of Najafgarh.

Gopal and Babita had to abort their trip , cut it short as a senior hijra from their gharana was sick,. so the house was left with a few denizens under Naina Hijra .

I shot a lot of pictures of Raveena , simply because she was highly cultured, educated ,seductive and a charming face to shoot.

I shot her as I saw her , and she is a consummate actress , mimic,all in one.

Her mobile phone kept ringing non stop, everyone wanted to talk to her..and she has no dearth of admirers and lovers..I presume.

She was the toast of Ajmer , I was lucky I was able to shoot all her colorful joyous moods.

She would give any starlet of Bollywood a run for her money..such was the magnetic power of her personality.

Shooting The Namaz From a Burning Rooftop Barefeet

Shooting The Namaz From a Burning Rooftop Barefeet, originally uploaded by firoze shakir photographerno1.
By Firoze Shakir Photographer No1 - June 25, 2010

Shooting The Namaz From a Burning Rooftop Barefeet

This was the Friday Namaz at Urus Ajmer 2010, and the floor of the roof top from where I shot this was burning like hell..

My intention was to shoot it frm the rooms of Gopal Hajiand Babita hijra , their balcony faces the road that lead to the Bulund Darwaza, but to my bad luck it was occupied by the namazis, even a few hijras were participating in this namaz , of the first friday at the Urus.

Than one of the hijras suggested I ggo to the terrace where I shot this series..Even Hindus with Rajasthani turbans were head bowed in Namaz..such was the glory of a spirituality that touched everyone..

Yes truly Allah Be Praised.
May His Will Be Done..

As I wont be posting all my new hijra pictures shot at the Ajmer Urus 2010 at my Hijra Eunuch Blogs Wordpress or at Blogspot you will have to see them at my Flickr photostream..

This is a very long series and it is a uphill task to cross blog all my pictures here ...just click on the picture it will take you to Flickr to my Hijras in Ajmer set..2010

Raveena Hijra Neither Man Nor Woman

Lethal combination of beauty and brains .
A mans soul in womanly chains
She loves to override her emotions
She loves to entertain
Hidden beneath her beguiled smile
Lies a Soul in pain
On legs of Hope
A neck of a crane
On her heart
it rains it rains

The Most Beautiful Hijra From Aligarh

The Most Beautiful Hijra From Aligarh, originally uploaded by firoze shakir photographerno1.

I have shot a lot of hijras , good bad ugly, but Raveena Hijra could take anyone's breath away , and mind you she is in a house dress not really made up for the occasion.


This is raw hijda beauty with a lot of talent , I told her if she was to star in a Bollywood movie they would not need to bring a kite from abroad called Babara Mori.

Raveena hijra is a consummate actress , she is a chameleon that changes her emotions within seconds.

I shot her is a understatement she shot me too, she is proud vain arrogant and she was born to play with mans languishing libido.

She belongs to the hijra gharana of Gopal Haji and Babita Hijra of Najafgarh Delhi.

And this was shot at Burraq Manzil where Gopal bhai stays at every Urus at Moti Katla.

And with this picture I begin my new set Hijras of Ajmer 2010.. as my tribute to her beauty and deadly charm.

She gave me some lasciviously sexual poses but I refused to shoot her..I shoot simplicity and the human essence of the hijra angst.

I shoot poems I convert them into pictorial thoughts.

So I present you a magical moment called Raveena ..the hijra substitute for a woman of substance. 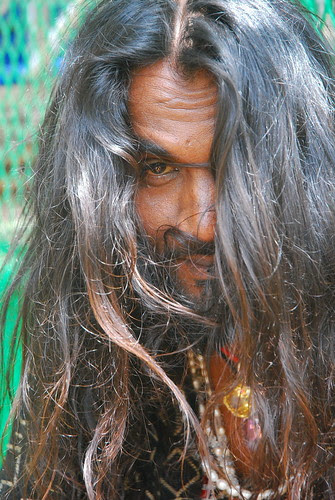 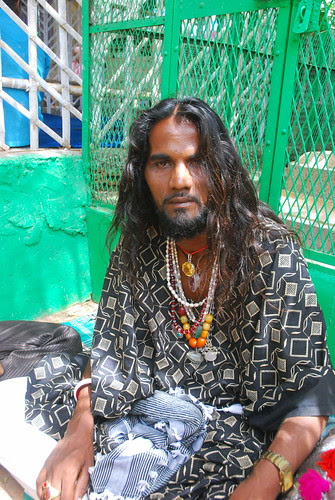 The most enigmatic god looking Bawa dude is Hassan Ganda Rafaee an exponent of hardcore body piercing, I have shot him since many years and he is one stylish bawa.

He was here at Char Ajmer with his two kids, and was exposing them first time to the public.

He has lost weight and has not been well he told me , he was part of Chancawalli Rafaees with his uncle late Handi as Murshad off this motley group.

Handi died at Kota so he and his cousin Farukh moved away..from the main group.

Handa commands respect and women would give anything to have a child sired by him.

Handa Baba has lived in jungles , among wild animals and brings the best hash and opium for his Murid..

I have documented Don Jaun Baba and he is a great photographic subject..goes without saying.