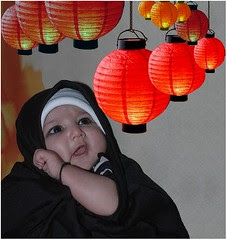 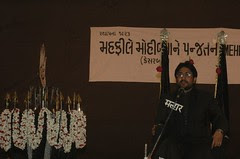 Before the Majlis begins the kids decorate the alams, run helter skelter.But once Maulana Yasoob Abbas son of Maulana Athar Saab Mirza sits on the Mimber , seriousness enters the chaos..this is a short Majlis on Hazrat Qasim, before it can get over the Juloos starts its rounds , the scourgings the kama matam, begins in the centre space that soon gets totally jampacked..
Shooting all this is impossible I shot most of it from a dias behind the podium..and later jumped down to shoot from below.
I was stuck with my 80-200 Nikon lens that was not coming out of the Nikon D70 mount , so shooting the Kama Matam was a total disaster. 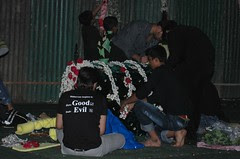 This is at Kaisar Bagh , kids are busy decorating the Alams , some decorating the Tabooots or Relicas of the Coffins of the Imam and his male family members..there is a tiny cradle too of the Imams six month son Ali Asghar , who the Yazidi forces instead of water shot him down with the arrow, the archer being Harmullah.
This was Islam under the aegis of the Ummayad Dynasty, Arab barbarism at its heigh , human values disregarded, this was the birth of Jehadi Terrorism, means justified the ends , these were Muslims who prayed 5 times and had no qualms in killing a man while his head was in prayers..decapitating a mans head in the Mosque too was justified for political supremacu as in the case of Hazrat Ali father of Imam Hussain and cousin of the Holy Prophet and his erstwhile son in law.. 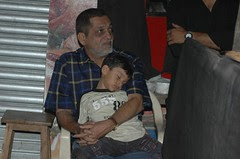 He is tired, he is asleep , but as soon as the Matam and the scourgings begin he will hand over his Tshirt to his guardian and begin the Zanjir Matam at Kaisar Bagh..this is the resilience of a persecuted race over the years the Shias...he will be flagellating his back to the cries of Ya Hussain Ya Hussain.. with his sharp razor like blades attached to chains..

Our Mothers Keep our Faith Alive This little Shia girl child with her father sitting on a scooter and listening to Maulana Athar Saabs Majlis on the road...this is a rare Shia child quality, from a very young age they imbibe the values of their Faith and Religiosity..
And this is what a Shia mother implants in childs soul ...Ahle Bayt and Imam Hussain.. Ghame Hussain.. the Tragedy of the Imam..
Karbala Ashura the legacy of our 1400 year old pain raw and alive... 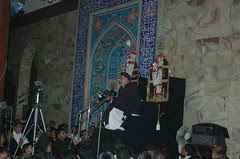 Maulana Athar Saab Mirza is a highly respected Shia Islamic scholar , theologian and Koranic expert, his Majlis at Mogul Masjid are completely HOUSE FULL, the entire Masjid Hall, the court yard the road outside and the byl anes are jam packed seeing him recite his Majlis on close circuit TV.
Maulana Athar Saab Mirza completed 50 years reciting Majlis at the Moghul Masjid. a record of all time..

The Police Commissioner and Moharam 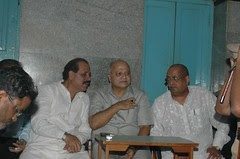 The respected Mumbai Police Commissioner Mr DN Jadhav was a guest at the Majlis of Maulana Athar Saab at Moghul Masjid , and the Police bandobust was at its maximum, Moharam is a sensitive Muslim feast and the Mumbai Police take care to avoid any misunderstanding or ill will among the two communities the Shias and the Sunnis..Peace, Law and Order is duly mantained as the Sunnis have their waz or religious discourse.. in the same area..vested interests criminals try to disrupt the peace by instigating both the communities that in Mumbai live in mutual co existence and harmony..giving space and respect to each others views and beliefs.. 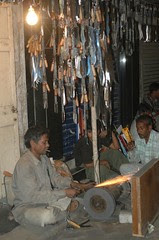 Today the eve of 7th Moharam, the Shias in Mumbai mourn the Martyrdom of Hazrat Qasim ibn Hassan , son of Imam Hassan who lost his life in the Battle of Karbala..
there is a short Majlis recited by Maulana Yasoob Abbas son of Maulana Athar Saab at Kaisar Bagh the Shia gadh of Dongri close to the Dargah Hazrat Abbas.
Like each year the Alams , the Zaris , and the procession begin round the hall as soon as the Majlis gets over and the scourgings kama matam begin in the centre , juloos jam packed goes a few circular rounds..little children , men boys and kids.. all moving with the Taboots or the replicas of the coffins that you will see in the following pictures all shot on my telly lens..

My friend Syed Masoom has sent me an article on Hazrat Qasim that I add to my post..The picture I took is of the whetting stone men who sell flagellating blades , short daggers for cutting the forehead..I did not carry my blades, nor did I participate as I wanted to shoot pictures, and my telly lens got jammed on my Nikon D70 so I could not use the semi wider lens..

THE MARTYDOM OF QASIM IBN AL-HASAN (peace be with them)

Qasim ibn al-Hasan had not reached the age puberty at time of his martyrdom at Karbala'. On the eve of 'Ashura' when the Imam informed his faithful followers of their imminent deaths, Qasim ibn al-Hasan, who was also in the gathering, went to the Imam and asked him, " O uncle! Will I also be killed?" The Imam embraced him and said, "O child! How do you find death?" He replied, "Sweeter than honey!" The Imam told him, "You will be killed after a great calamity and so will 'Abd Allah, the infant ('Ali Asghar)."
(Al-Waqa'i' wa-al-Hawadith ).

Qasim ibn al-Hasan readied himself for battle on the Day of 'Ashura'. Then he went to the Imam for his final farewell. The Imam took Qasim to his bosom and both wept for a while. Qasim asked


permission from the Imam to go into battle. However, the Imam was hesitant. Qasim repeatedly asked until the Imam reluctantly allowed him. Qasim, distressed and with tears rolling down his cheeks, advanced into battle reciting:

I am the son of al-Hasan if you are unaware, the grandson of the Messenger, the chosen, the trusted.
This is Husayn like a captive held in ransom for people whose thirst may not be quenched by the falling rain.

Qasim mounted an attack on the enemy killing three of them.

Humayd ibn Muslim reported this incident in the following way: A young boy came out of the tents of al-Husayn and approached the battlefield. His face was like the first splinter of the new moon. He had a sword in his hand and was wearing a long shirt. As he entered within the battlefield and engaged in fighting, 'Amr ibn Sa'd Azdi, who stood next to me, said, "By God! Let me attack this child!" I replied, "What cause do you have with him? He is only a child. Let those who surround him finish him off. By God! I would not lift a finger against him even if he was to strike me down with his sword." He repeated, "By God! Let me attack him and make life a misery for him." As Qasim ibn al-Hasan was fighting with the soldiers that surrounded him, 'Amr sneaked behind him and struck him on the head with a sword. Qasim's head split open as he fell from his mount onto his blessed face and he cried out. " O uncle! Come to my aid."

The Imam was standing watching his nephew Qasim. No sooner had Qasim cried out to him than the Imam, descending like an eagle upon its prey, launched an attack tearing through the ranks of the enemy until he reached 'Amr Azdi. The Imam struck at him with his sword. 'Amr raised his arm to shield himself from the blow and his arm was cut from the elbow. 'Amr called out to save him from the Imam. Their horses collided with and 'Amr fell. The horses galloped over his body and he was trampled to death by their hooves. When they finally managed to carry it away. As the cloud of dust and sand raised by the galloping horses settled, the Imam was seen, standing by Qasim. He rubbed his heels on the ground as his soul departed from the mutilated body. The Imam put his cheek on the torn chest of Qasim crying and lamenting, "O child! It is unbearable that you called out to your old uncle and I could not come to your help. And when I did, it was to no avail."

The Imam took Qasim's body into his arms and carried him with Qasim's feet dragging on the ground to where the bodies of his sons, brothers and companions were placed. He placed Qasim's body next to his son 'Ali Akbar and he said to them, "O my nephews! Persevere. O my children! Have patience. By Allah! You will not see any grief after this day."
(A'yan al-Shi'ah).

According to another report, the Imam placed Qasim next to 'Ali Ak


bar. Then he sat between the two of them. He removed his turban and scattered dust on his head. Then he placed his right hand on the chest of 'Ali Akbar and his left hand on the chest of Qasim. With his eyes filled with tears, he looked up at the sky and cried out, "O Lord of the worlds! Al-Husayn has been deprived of his sons."

According to some reports, when the Imam sent Qasim of to the battle, he tore Qasim's turban into two pieces. He placed one half on his shoulders and chest like the top piece of a shroud while he tied the other half to his head with a strap falling across his face and ending around his neck on his back. It was for this reason that Qasim's face was described as the first splinter of the new moon.
(Muntakhab Turayhi).