The Power of Ritualism Observed and Explained 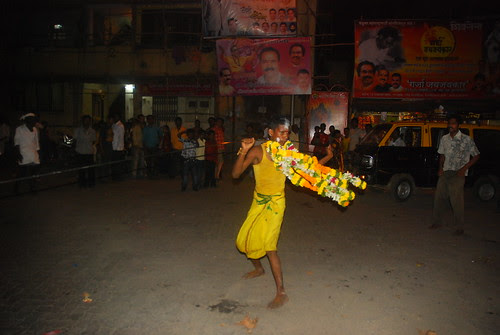 The Power of Ritualism Observed and Explained, originally uploaded by firoze shakir photographerno1.

This requires spiritual skill to move the entire body along with the 18 feet rod in the mouth and move about in circles , and one wrong move you can tear your jaws , so the moment the guy will fall another guy goes from beneath and holds his legs for balance and support.

An nobody bleeds when the rods are inserted or removed.

I think the only time I saw the bleeding from the mouth was when the rods were removed at Maryamma Temple Madras Wadi Worli..

Though I had given my card I was not invited this time when they had their feet.

You need networking and a good contact to know when this event will be performed.

In three years Raja the piercer gave me his number at Mahim Macchimar feast so thanks to him I was able to shoot this Sion Koliwada event.

So sometimes photography is assisted by karma or fate.

If you are not destined to shoot it you wont.

And I found these piercings more intriguing than those performed by the Rafaees or the body piercing mendicants a begging order of mystics in the Sufi circuit.

The Shia body mutilation , is the only ritual that blood flows freely and the flesh is cut viciously without medication the cuts and wounds heal in a day or two.

The severe sword matam requires stitches as the back is a total mess and the guys at Habib Hospital Dongri have a tough time during Ashura and Chehlum in Moharam when these blood letting rituals are performed in memory of Imam Hussain Martyred Grandson of the Holy Messenger of Islam.

These Shia rituals are 1400 year a protest against Terrorism in Islam as it existed under the regime of Yazid the Caliph of Ummayad Dynasty.

Incidentally it is worth mentioning that the Shia community last evening celebrated the Dastarkhan of Imam Hussain ..a day marked with happiness on the death anniversary of accursed Mauwiyah the father of Yazid.. enemy of Ahle Bayt.

The Tamil devotees of Maryamma also walk on fire like the Shias who call this ritual Ag Ka Matam..in memory of the Fourth Imam Zainul Abedin son of Imam Hussain.

Ritualism ancestral customs are the core of Indian spirituality..and are an integral part of Faith in any community.

I shoot pain and pain is the only emotion that joins one man to another our birth is pain and our death is the only deliverance from pain according to my personal belief.

I gave my camera to the event photographer and here I am with hijras of Sion Koliwada , devotees of Goddess Maryamma.