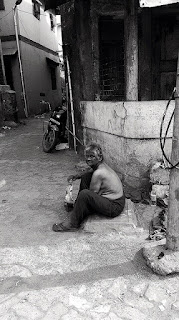 In the morning coming back from my tennis
at Chapel Road trying to have a bath with
a bottle of water ,,helpless a mother or a
sister shocked at my moderation i shot her
her pain on the soul of cyberspace not
photo shopped or morphed i caught her
now getting trolled on twitter ...my voice
they cannot smother ,,teaching me ethics
of photography girls old enough to be
my granddaughters ,,see my profile before
you insinuate ,,as i dont shoot porn
it was her fate by the Third Eye of Shiva
that to the humility of my camera bought her
By Firoze Shakir Photographer No1 - June 04, 2016

The Humility of My Tennis Coach Surendra Pawar ...Untold Story 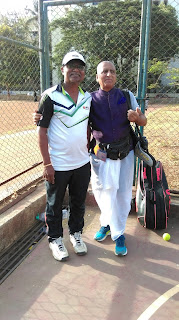 Last year since 10 Feb 2015 I began walking rigorously from my house at Bandra Reclamation Lal Mitti till the end of Bandra Reclamation beyond the furthest end .
One day I met another senior walker who suggested instead of taking a risk against speeding cars coming from the Sea LInk why dont I try walking at the MET Grounds as it was called those days .
All the years at Bandra Reclamation where I stayed I never walked I was fat lazy and blood sugar ridden..swollen feet no stamina .. and loads of health problems .
So I began taking rounds with some old friends who would join me after their tennis session..I thought tennis was an expensive sport and I was not into sports I never played football cricket or hockey in school.. I was a bookworm and a drama lover ,..
One day in April Coach Surendra Pawar who had become my friend invited me to try my hand at tennis I thought he was joking but I tried my hand along with another 83 old man..
And thus began my Tennis Yatra ,, in the mean time my loving sister Farzana Suri gave me a tennis racquet and I have a disability on my right hand but I played on,,,
At the end of the month I asked Coach about my fees ,, and he politely refused to take a cent from me ,,I felt bad I told him atleast charge me something a token amount ,, but Coach would not take money from me that was his final reply .
And all he said Firoze Bhai your blood sugar should come down I am in tears as I write this ,, I mean in the eyes of a polarized world he was a Hindu I was a Muslim...but in the eyes of each other we were blood brothers the same sensitivity ,, as humans .
On my birthday 10 December 2015 Coach gifted me a very expensive Head racquet and hugged me like his own brother ,,and his boys all of them treat me like their own family Darshan Bendal Rohan Pawar Vish Sawant Mangesh Dhotre Praful Tambe Sanket Kamble and his son my Guru bhai Sahil Pawar,
So this is my Tennis story I promote my Coach as he gave me a new lease on life ,,my waistline was 41 I am 36 now my blood sugar was between 300 and 350 now 82 ,,,along with the Coachs contribution it has also been Dr Shashank Joshi who has given me good good medical treatment .
I cannot forget my wife who maintains my diet ,...
I also am thankful to all my tennis team mates we are one big happy family 45 minutes 6 days a week that change the way we face life .
Whatever I have down for my Coach is speck compared to all that he has done for me ,, because he does not charge me I stopped taking my granddaughter to the Court ,,, its too heavy a burden on this beggar poets self consciousness ,,,and self righteousness .
And last but not the least my Coach has never forgotten the elders of Khar Gynmkhana who gave him a chance , he started off as a ball picker and has taught tennis to most of the veterans .
He speaks highly of Razdan Sab Premji and Mr Shyam Shroff..
So this was a story I have finally shared with all of you ,,