I Type With One Finger Of My Damaged Right Hand 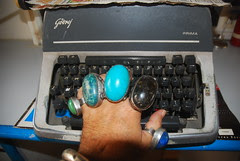 I Type With One Finger Of My Damaged Right Hand, a photo by firoze shakir photographerno1 on Flickr.

This typewriter belongs to a friend and his typist does the work, once upon a time he had good business as there are lawyers offices around but the with the coming of the internet the digital word he now has just a few clients ..I often tell him to buy computer and give his typing business an upgrade but he simply nods his head , his children are in America , he hardly needs the money he has landed ancestral property miles and miles of it in Goa , he has started a nursery there , I love his typewriter ..

All my blogs at Flickr over 200000 have been written by this one finger of my damaged right hand, I cut a tendon while trying to cut my head with a sword in Delhi Chehlum Moharam while doing a ritual called Kama Zani....I neglected it and because of my diabetes it turned gangrenous ...but now it has healed though the end of the hand is shaped like the claws of a tiger or the hood of a cobra..

I dont use a pen at all .. I am mouse dependent for all my blogs..I dont take notes I dont do interviews I shoot pictures ,pictures that later become poems ..

Its been two months since I moved out of Facebook, I am on Google+it is not as friendly as Facebok but it helps me pimp my old Flickr posts and blogs..I do miss all my Facebook friends but I was hooked I had to go for rehab get myself detoxified ..

Blogger says that this blog has been rate-limited. Please try again later. 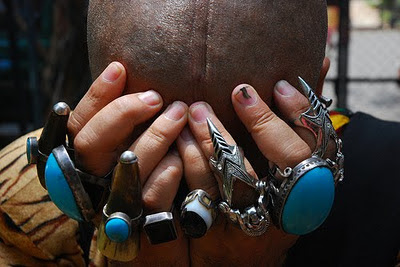 As a Blogger the worst punishment at Blogspot is the cursed words of racist hate are Blogger says that this blog has been rate-limited. Please try again later. I hate Blogspot it needs to evolve a better policy towrds bloggers like me that are not positive spam.. I think Blogspot should shut down as Google+ should take over this aspect and become a platform for bloggers.. Word Verification sucks Blogspot sucks.. If you make a large number of posts in a single day, you will be required to complete word verification. After 24 hours, the word verification will automatically be removed. Learn more
By Firoze Shakir Photographer No1 - October 21, 2011

Megha The Enchanting Hijra Beauty of Bollywood, a set on Flickr.